eBay is the world's largest online marketplace. Today, more than 94 million active users around the globe flock to eBay to find the best deals in cyberspace. In 2010 alone, the total value of goods sold on eBay was a staggering $62 billion or $2,000 every second.

Along with eBay's success comes a huge demand to ensure reliable, 24x7 availability of the services that enable these transactions. There's no room for error, especially during the peak online holiday shopping season. For eBay, that has meant using the WSO2 Enterprise Service Bus (WSO2 ESB) to carry more than 1 billion transactions per day during peak shopping times in 2010.

In 2009, eBay assessed whether its custom technology infrastructure could scale to support the company's rapidly growing business with consistently high performance and reliability. After evaluating, the IT team realized the need for an improved approach.

"The solutions we were using no longer met our needs, so we considered whether to build a new internal system or to adopt third-party technology," said Abhinav Kumar, senior manager of systems engineering at eBay. "Strategically, we saw several benefits from working with a thirdparty solution, so we evaluated a number of products on the market."

A couple of key considerations played into eBay's decision. First, eBay wanted to accommodate enhanced service mediation and orchestration capabilities to its existing service-oriented architecture, in order to enhance its business services. Additionally, any solution implemented would need the scalability and performance to sustain the increasing trafic loads of eBay's fast-growing customer base.

"Open source technology is important as we drive innovation across our platform, and including open source alternatives in our evaluation was a natural fit." Abhinav noted.

eBay employed a deep analysis of each competing ESB product that went far beyond a review of the feature sheet. The company reviewed product architectures and completed performance evaluations, often working with vendors to get the most accurate picture possible.

To facilitate review of the WSO2 ESB, WSO2 offered eBay complementary evaluation support that included 24-hour inquiry-facilities where WSO2 engineers were available to eBay anytime of the day for urgent calls and queries. During this period, eBay tested the WSO2 ESB under extreme traffic loads, and WSO2 architects and engineers provided the eBay IT team with technical support for validating its performance. Such as performance, including builds and patches for the WSO2 ESB on Redhat Linux.

" During evaluation, WSO2 ESB outperformed all other ESB options in both speed and reliability."

After a comprehensive evaluation process, eBay selected the 100% open source WSO2 ESB as the best product capable of handling the middleware requirements of eBay's online marketplace. The WSO2 ESB outperformed all other software options in both speed and reliability. Moreover, unlike ESB hardware, the WSO2 ESB demonstrated the flexibility to grow and adapt to eBay's evolving requirements for handling transformations, orchestrations, and complex message flows.

Within a few months of choosing the WSO2 ESB in 2009, eBay had an initial deployment in place that handled roughly one million calls per day during the 2009 holiday shopping season.

Just 1 year later, all of the eBay services that are exposed to e-commerce are mediated through WSO2 ESBs - handling more than 1 billion calls per day. WSO2 ESBs have also begun to handle some internal eBay use cases.

There are now several pools of WSO2 ESB servers, which are deployed in a shared-nothing architecture, running on RedHat Linux and set up on multi-core X86 Intel processors. Each pool of high-end WSO2 ESB servers is provisioning one of three use cases that support eBay’s various business functions: routing, orchestration, and service chaining. These deployments currently include dozens WSO2 ESB instances, which altogether accommodate external and internal traffic loads from different functional areas such as shopping, trading, checkout, and mobile, to name a few. 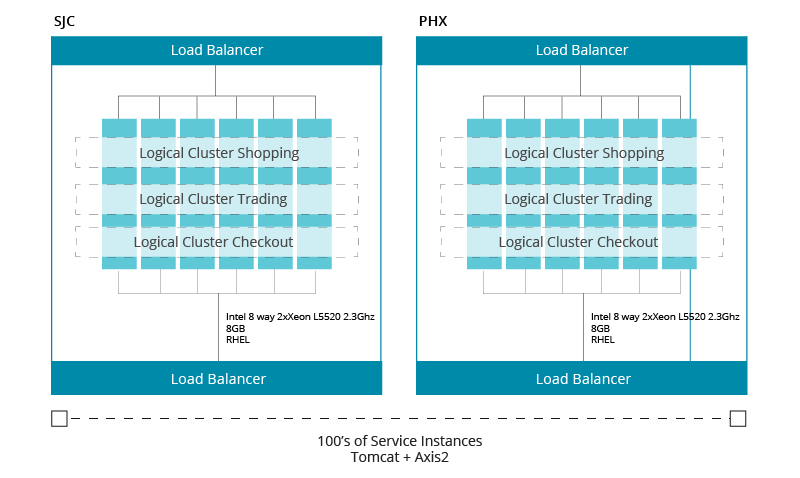 Memory usage for all ESB instances is significantly less than 2.0GB at all times

Because the WSO2 ESB instances easily inter-operate with eBay's in-house and third-party monitoring systems, they have helped to improve the overall monitoring capabilities of the system.

With the use of WSO2 ESB deployments, eBay successfully provided a reliable and an efficient shopping experience to its vast customer base worldwide, much to the delight of the eBay’s management team and the customers.

Using the WSO2 ESBs, we've been able to provide customers and partners with the quality experience they expect on eBay, even as our global customer base has grown," Abhinav ovserved.

"Using WSO2 ESBs, we've been able to provide customers and partners with the quality experience they expect on eBay."

Given the central role the WSO2 ESBs play, eBay has engaged WSO2's support team during critical deployments. Significantly, the same WSO2 architects and engineers who have been involved with product design and development also provide support, ensuring a deep knowledge of the technology.

Typically during critical new deployments eBay engages a specialist architect from WSO2, who works onsite with eBay's engineering team to ensure that the deployment is completed smoothly. This best practice approach has ensured timely, high-quality completion of the entire project. For example, the WSO2 support team was able to resolve and patch a bug in the WSO2 ESB, in which performance diminished after 1 billion messages went through a particular system. This limitation no longer exists. Additionally, the WSO2 support team provided eBay with several workaround solutions and patches to enable the system to interact with clients that do not properly comply with the HTTP specifications.

Based on the proven performance, resource utilization and scalability of the current WSO2 ESB instances, eBay already has planned several future deployments with WSO2 including the use of REST gateway deployments and federated ESBs.

"eBay is one of the e-commerce leaders of the world, and our technology is world-class. We use products such as the WSO2 ESB that help us to effectively manage our efficiency, scalability and security requirements," said Abhinav. "From a business perspective, we have met our goals to date. We're invested in the WSO2 ESB and plan to continue investing in it."