Sharing data and services between government institutions is a difficult business, often overlaid with complications that corporations do not face. Few understand this better than the Eurasian Economic Union (EEU).

The EEU's origins lie in 1994, long after the formation of the Commonwealth of Independent States. The then-president of Kazakhstan suggested a "common defence space" called the "Eurasian Union". This idea was expanded upon with the goal of creating a shared economic bloc. This resulted in numerous treaties and ultimately led to the formation of the EEU in 2015: an economic union, composed of Armenia, Belarus, Kazakhstan, Kyrgyzstan and Russia, to foster the free movement of goods, capital, and people.

In its current form, the EEU spans 20 million square kilometers, has an integrated single market of some 183 million inhabitants, and commands a GDP of over 4 trillion US dollars. It operates through intergovernmental institutions that span nations: the Economic Council, the Eurasian Commission, the Eurasian Intergovernmental Council, and the Court of the EEU.

Today the EEU relies on an integration platform, partly based on WSO2 open source enterprise middleware, to enable the easy exchange of information across some 300 government agencies within the five countries forming the Union. The platform, which bridges the various data silos and software systems of different nations in the Union, is capable of handling over 100 transactions per second via WSO2 Enterprise Service Bus (WSO2 ESB). The solution was created by CROC, a WSO2 partner and one of the largest integrators in Russia.

The Challenges of Exchanging Data Across Nations

Early on, the EEU recognized the need for a system that would enable easy access to shared information across nations, as well as support the various functions and processes of the Union. To develop the system, the organization turned to CROC, which leads the Russian systems integration market and is one of the 10 largest IT companies in Russia.

In outlining the scope of the project with CROC, the EEU identified five key requirements for the platform: 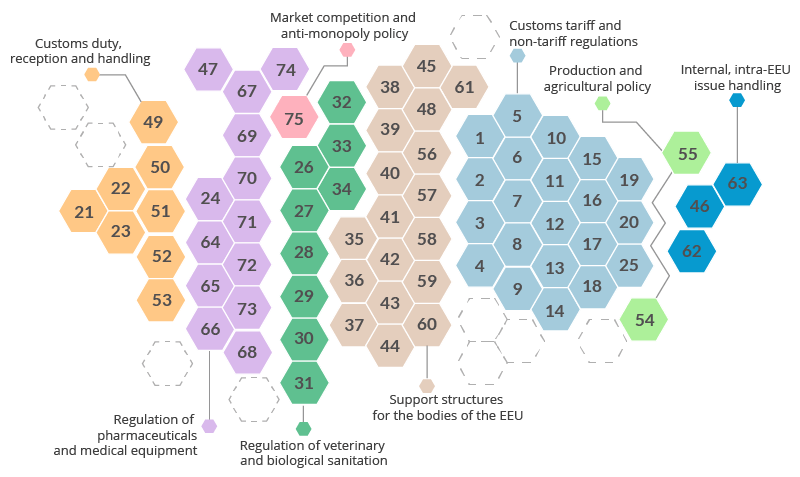 "From our perspective, the requirements boiled down to building an integration platform that could connect to national and trusted third-party subsystems, as well as manage the exchange of data using a unified data model and maximum reuse of data structures," explained Alexey Smirnov, head of the Integration Solutions Practice at CROC.

However, CROC - and the consortium of companies that it led for this project - first had to address the issue of establishing standards that all of the countries in the Union could work with. Every country had its own cryptography standards, legal systems, and software. So Croc first built a handbook of common international and national standards for development, data structure design, and security that all member states would follow. The firm also worked out the rules of electronic data exchange—addressing actors, responsibilities, digital signatures, protocols, interaction patterns, cross-border interchange regulations, and audit requirements. Once this was done, CROC could proceed with building the actual integration platform.

The WSO2-based integration platform that CROC designed connects to the national systems used by the state members, and also to trusted third-party (TTP) services. The TPP services are a necessary byproduct of the different laws and national verification requirements involved. They would act as electronic notaries, controlling and verifying integrity, confidentiality and non-repudiation of the data transmitted in the system. The platform connects these national systems with a number of internal subsystems.

First is an information portal that can be accessed by citizens, businesses and government agencies, offering various levels of data and access depending on the user.

For citizens, it largely functions as an open data portal, providing access to information on legislative acts, customs and taxes within the Union. Businesses can access a set of services for online cross-border customs procedures, intellectual property management, shared medical and drugs market, and other services. 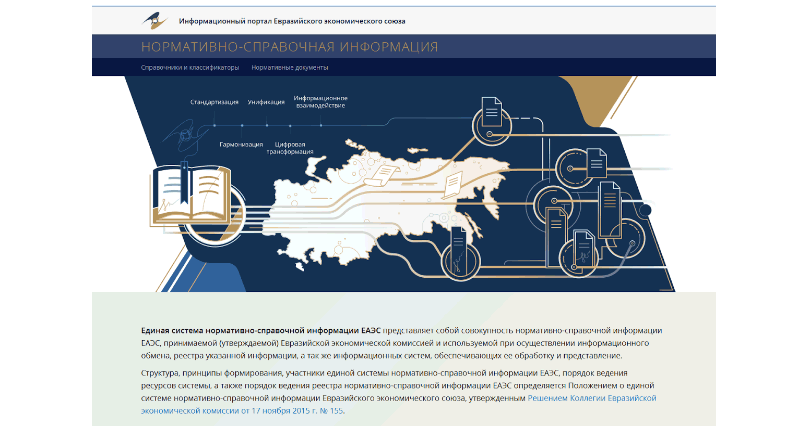 Then there is also: 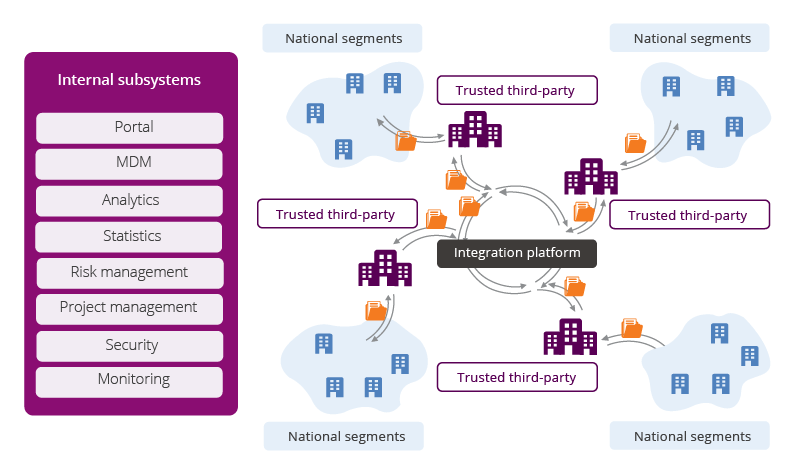 For the central integration platform, CROC built a federated architecture using WSO2 ESB, WSO2 Application Server, and PostgreSQL for the database. It comprises six integration gateways which work at the level of national and integration segments and are interconnected with the messaging system. The security model is based on digital signatures instead of user identities, and thus user identities can are kept separate across different identity systems. While the application server hosts the user interface and provides configuration tools and logging tools, the enterprise service bus handles the integration by acting as the integration gateway for all processes.

The choice of WSO2 for the integration platform was logical, according to Smirnov: "First of all, it was absolutely suitable and complied with customer key requirements, and there was no vendor or platform lock-in. We also had previous experience with WSO2, so we knew the software offered great performance and that we could trust the company."

Today, the platform integrates the five countries of the Union. It provides configuration-based management, end-to-end auditing, and automated diagnostics. It has been deployed as three separate groups of services: the integration gateway core server, database, and application server, with hooks for managing and monitoring activities. 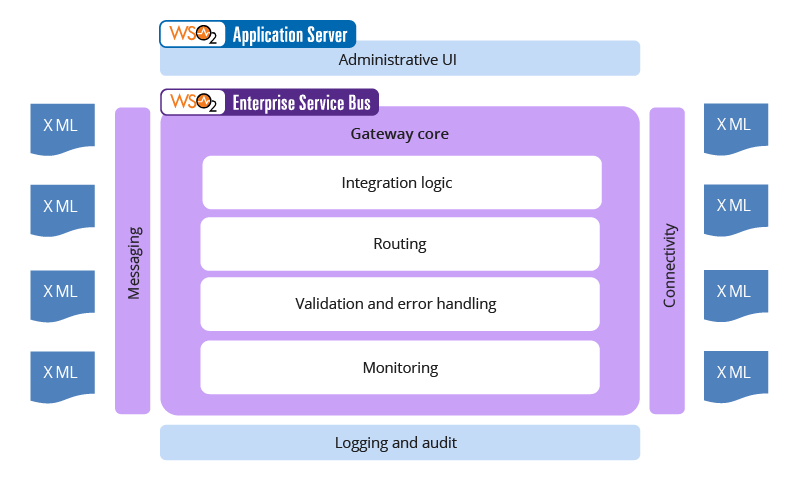 WSO2 and CROC Help the EEU to Achieve its Goals

The integration platform now deployed within the EEU has addressed several of the organization’s requirements. The Union wanted to get up and running quickly, and using WSO2 middleware, CROC was able to meet the requirement to deploy the platform in three countries within six months. To ensure fast response times for users, the EEU also wanted the platform to be capable of processing up to 100 transactions per second (TPS). The WSO2-powered integration platform clocks up to 110 transactions per second; it also is easy for the EEU to monitor and control.

From a political and economical perspective, the WSO2-based integration platform provides technological support for new countries to integrate with the Union.

"The entry of Armenia and Kyrgyzstan to the EEU was facilitated by the platform, since it allowed the countries to exchange customs and tax data, which was a key requirement for them to become full members of the Union,” Smirnov explained. “Significantly, the flexibility of the platform allowed the Union to launch state-to-state data exchange processes without the need for new development."

Moving forward, CROC is evaluating how to build on the success of the current integration platform.

"We are looking at providing open data services via APIs," Smirnov noted. "We are also planning a new system to handle interactions with external information systems. The system would provide the Union an opportunity to interact with other entities, like the EU and the UN."

Smirnov added, "Using WSO2 middleware, we have the confidence that we can meet the technical challenges of integrating the EEU with other governments and agencies around the world."