Around the globe, enterprises are seeking to optimize their marketing resources to create compelling brand experiences that are critical to driving business growth. At the forefront of empowering these organizations is a global brand services company dedicated to helping clients and their strategic partners implement marketing communications, creatively and efficiently.

"The fact that WSO2 ESB and other WSO2 products are cloud-native and scriptable makes them very attractive."

Today, the organization relies on WSO2 Enterprise Service Bus (WSO2 ESB) and WSO2 Identity Server to integrate and manage authentication across the 20 distinct modules that comprise the MRM application.

For nearly a dozen years, the MRM was a traditional monolithic application. However, as it grew, the product became more difficult to maintain, and was soon outdated in the wake of evolving marketing channels and demands. In early 2012, the company realized it was time to re-architect the MRM system.

“We needed to decide whether to make an evolutionary change to the product or throw out what we had and start again,” recalled a development manager with the business. “We decided on the latter.”

Early on, the company’s development team identified core requirements for the new system. It had to be modular and based on a service-oriented architecture (SOA) that would be highly scalable and have long-term maintainability. It also had to take advantage of open source software. In the SOA tradition, the business first considered SOAP, but based on the developers’ feedback, decided to move to REST APIs.

Additionally, the development manager said, “We wanted to develop our software centered on an agile methodology, since we knew this project would take several years and that it would grow to a large scale.”

The Advantages of an Open Source ESB

Because an enterprise service bus would serve as the backbone of its SOA, the company invested several months in evaluating both commercial and open source ESB offerings. It soon became clear that the high total cost of ownership (TCO) for commercial products made open source software a much more attractive alternative.

“For commercial products, the amount of preplanning and understanding of what we needed to achieve was just too high to justify the cost,” the development manager recalled. “We needed a toolset that we could get up and running at minimal cost, so we could see immediately if we were going in the right direction. We wanted to prove the concept before making a serious commitment, and open source ESBs provided that ability.”

The open source ESBs were not without their own challenges. Many required Java development expertise. By contrast, WSO2 ESB, though newer to the market, was highly configurable and minimized the need for software development.

“At the time, WSO2 was the new kid on the block, but we liked the way the product was built around a service architecture,” the development manager noted. “Then, once we learned more about the company, its products and future roadmap, we realized that it synced up nicely with our needs.”

Another advantage of WSO2 ESB is that, like all WSO2 enterprise middleware products, it is fully cloud-enabled.

"With the WSO2 enterprise middleware platform, you have the building blocks to put together the pieces anyway you want"

“We have a private cloud environment where all virtual machines are built through scripts, and everything is deployed automatically,” explains the development manager. “The fact that WSO2 ESB and other WSO2 products are cloud-native and scriptable makes them very attractive.”

Before moving to the first phase in developing the MRM system’s new modular architecture, the company first needed to conduct a proof of concept using WSO2 ESB. This initial work with WSO2 ESB was completed in about three months.

As it was ramping up on WSO2 ESB, the company also began looking at solutions to authenticate its clients and manage their access to the MRM system’s application modules. Based on the initial success with WSO2 ESB, the business decided to use WSO2 Identity Manager.

“WSO2 ESB and WSO2 Identity Server are part of the WSO2 middeware platform and are built on the same code base,” the development manager observed. “So when Identity Server came along, we knew straight away how the administrator worked and where the configuration tools were. DevOps knew how to setup the virtual machines. We knew how WSO2’s software worked, and that made life generally a lot easier.” 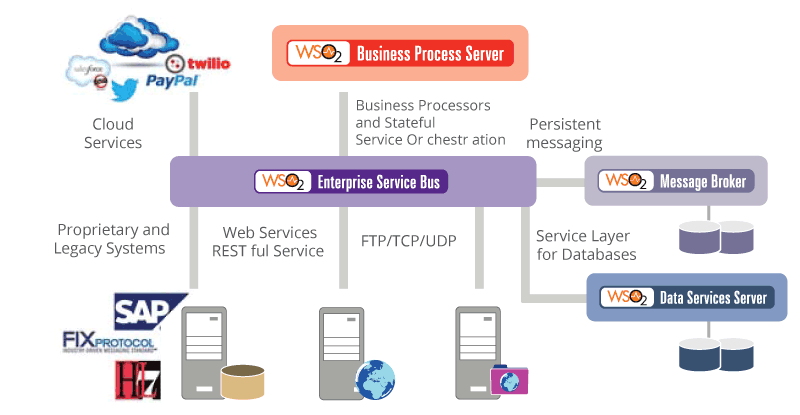 Figure 1: The company relies on WSO2 ESB to manage messages from the business layer of its MRM application and direct them to the service layer. Meanwhile, WSO2 Identity Server manages OAuth tokens and provides the company’s clients with SSO authentication via SAML 2.0.

Today, the cloud-based MRM application has 20 different modules running on 20 distinct systems, which rely on WSO2 ESB for messaging and WSO2 Identity Server for user authentication and access management.

At the front-end of the MRM system is a client-facing layer that connects to the application’s business logic layer, which sends messages for what needs happen.

“WSO2 ESB manages the messages through message queues and directs them to the service layer, which does all the heavy lifting,” the development manager explains.

“Our end-to-end, multi-tenant online tool is used by many large businesses around the world working with sensitive information,” notes the development manager. “It was shocking how quickly we were able to optimize our security features and deliver an improved product with WSO2 Identity Server.”

In addition to WSO2’s technology, WSO2 support services also have contributed to the successful implementation of the re-architected MRM application. Although the company didn’t use WSO2 development support for the initial work with WSO2 ESB, the development team relied on the service when WSO2 Identity Server was added.

The development manager recalled, “Our experience is that after taking advantage of WSO2 development support, it was a lot easier to complete the implementation. That was money well spent.”

Building on its initial success with WSO2 ESB and WSO2 Identity Server, the company is now testing the use of WSO2 API Manager and WSO2 Data Services Server.

“The great thing about WSO2’s software is that it understands and grants its users the structural freedom to build their systems,” the development manager explains. “With the WSO2 enterprise middleware platform, you have the building blocks to put together the pieces anyway you want. We now have the software in place that will allow us to evolve our application and stay at the forefront in addressing marketers’ changing demands.”

"Our experience is that after taking advantage of WSO2 development support, it was a lot easier to complete the implementation. That was money well spent"