The SOAP extension supports the following specifications. If not whole, at least the required subset for basic Web services.

The SOAP extension mainly focuses on RPC style Web services. However, you can also use document literal style WSDL files with the WSDL mode of services and clients.

Classes of the Extension 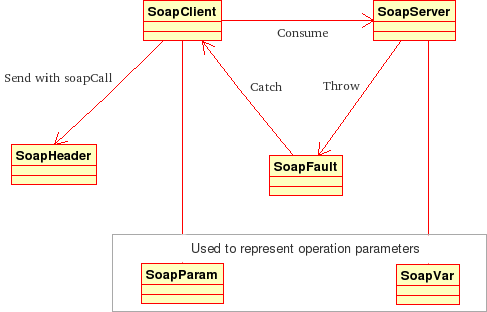 This class can be used to consume Web services. The SoapClient acts as a client for a given Web service.
It has two modes of operation:

In the WSDL mode, the constructor will take in a WSDL file name as a parameter and extract information about the service to be consumed from the WSDL.
In the non-WSDL mode, options can be used to convey the information to be consumed. This class comes with several methods that are useful in consuming services. Out of them, SoapClient::__soapCall() is the most important. This method can be used to call an operation on a service.

The SoapServer::addFunction() method can be used to add one or more functions that can act as the operations of the Web service.

This class is inherited from the Exception class and can be used when dealing with errors. SoapFault instances can be thrown or caught with SOAP fault related information and be dealt with as required by the programmer.

This class can be used to represent SOAP headers. It is just a data container and does not have any methods other than the constructor.

The SoapParam class too is just a data container with only the constructor method. This class can be used to represent the parameters passed to Web service operations. This class is useful in the non-WSDL mode to convey information in the expected format of parameters.

SoapVar is also a low level class with only a constructor, like the SoapHeader and SoapParam classes. This class can be used for encoding parameters passed to an operation of a Web service. This class is useful in the non-WSDL mode to convey type information.

In Web services, there are two models of implementation: Contract First model and Code First model.

In the contract first model, a WSDL file, which is an XML file that defines the service interface, is used. The WSDL file defines the interface that the service has to implement or the client has to consume. The WSDL mode of the SoapServer and SoapClient is based on this concept.

In the code first model, the code implementing the service is written first. Then in most cases a contract, in other words a WSDL, is generated out of the code. Then the client can use that WSDL, at the time of consuming the service, to take note of the interface of the service. However, the PHP 5's SOAP extension does not have provisions for generating a WSDL out of the code. To cater for this situation, the non-WSDL mode of the SoapServer and SoapClient can be used.

Hello World with the SOAP Extension

In the sample Hello World service, there is an operation named greet. This operation takes a name as a string and returns a greeting as a string. This sample uses the following WSDL:

Here is the source for the WSDL mode service using the SOAP extensionAPI.

Source code for the client is shown below.

When you place the above PHP scripts in the document root of your Webserver, and request the client script from a Web browser or invoke the scriptusing the command line PHP interpreter, the client will send a SOAP requestto the service script and the service will respond to the client with a SOAPresponse.

Following is the SOAP request that is sent by the client:

Following is the SOAP response that is sent by the service in response to the above request:

In the non-WSDL mode, as in the case of the WSDL mode, the greet function is implemented first. However, the way the function is implemented is a bit different to how it is done in the WSDL mode. Rather than just returning an array representing the response, in the non-WSDL mode we have to wrap the return value with a SoapParam object. When creating the service, the first parameter is null as no WSDL is provided; instead an options array is passed. The only mandatory option is the URI of the service. The rest of the method calls are similar to those called in the WSDL mode.

In the non-WSDL mode, because a WSDL is not being used, an options array is passed with the mandatory options of the location and the URI. The call to __soapCall() method is similar to that used in the WSDL mode. However, the SoapParam class is used to wrap the parameters in the expected format. The returned result will capture the greeting in the response.