The real implementation of the engine does not contain an object or struct named flow; rather a set of phases put together in a one-dimensional container represents the concept of a flow. The order in which the phases should be put together to form a flow can be configured in axis2.xml configuration.

For the out-flow, the only pre-defined phase is:

The following diagram illustrates how the phases in the above sample are ordered in the respective flows.

In the above example, two user-defined phases are added to both the in-flow and the out-flow, in addition to the pre-defined phases. Defining a new phase does not involve any programming as far as the user is concerned.

A handler is the smallest unit of invocation in the Axis2 engine. When a phase is invoked, each handler in the chain of handlers within the phase will be invoked. Depending on the flow on which the phase containing the handler is placed, the handler could choose to do any form of processing. The most common use case for handlers is to act as a unit of processing for a module that deals with the quality of service aspects of a Web service.

The rule of thumb is to deal with SOAP header processing within a handler. This is because the SOAP body's payload will be dealt with business logic processing. Business logic is the responsibility of either the message receiver on the server side or payload processing logic on the client side. However, there can be situations where a handler needs to deal with the whole SOAP message. An example is a security handler that needs to decrypt an encrypted incoming message before presenting it to the rest of the engine.

A module can have one or more handlers. In addition, a module also has a configuration file that defines how the handlers of the module are to be placed into the phases. When configuring a module, users can place the handlers in a module into pre-defined phases of the Axis2 engine.
Adding a new module involves programming, unlike adding a new phase. For all the handlers of the module, the axis2_handler interface needs to be implemented. Basically, this means that the invoke method with the following signature needs to be implemented by each handler:

Once the handlers are implemented, the module needs to implement two API calls to facilitate dynamic loading. These functions are:

The Axis2 engine looks for these functions and uses them when loading and unloading the module.
Once the source code for handlers and module wrapping code with the above functions are ready, they can be compiled into a shared library. In order to use the module, a configuration file is also required. The following shows a sample configuration file for the WS-Addressing that comes with Axis2/C 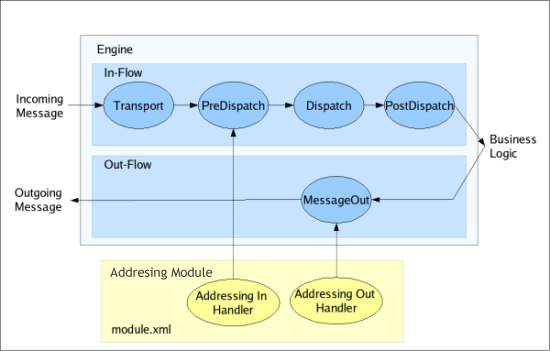 After deploying a module, in order to let the Axis2 engine pick that module and insert the handlers in that module into the respective phases configured by the module.xml file, the module needs to be engaged. Even if a module is deployed, but not engaged, the engine will not include the handlers of that module in the execution chain.

A module can be engaged by adding a 'module ref' entry in the configuration file.

The above would engage the addressing module.

The primary use of modules is to provide WS-* spec support. Web services Addressing, Security, Reliable Messaging, and Eventing are all implemented using modules.

Modules can also be used for purposes other than implementing WS-* support. Axis2/C comes with a logging module example. WSO2 WSAS for Java that is based on Apache Axis2/Java, comes with a throttling module for request policing. Another potential use would be for accounting- a module that accounts for statistics such as total number of requests, faulty requests, successful vs. fault responses, etc.

The Axis2 engine consists of flows, in-flow and out-flow, and based on the message exchange pattern in use, all or some of those flows will be invoked. A flow is a collection of phases arranged in a linear container in some configured order. Each phase in a flow will be invoked when the engine invokes a flow. A phase is in turn a collection of handlers, again arranged in a linear container in a configured order. When a phase is invoked, the phase will invoke all the handlers in it, in the order in which they are stored within the phase. Modules enable Axis2 users to extend the Axis2 engine's behavior by introducing new handlers into the phases of the engine. Users can configure a module, with information such as in which phase to place the handlers along with rules on how to place handlers within named phases.