West Corporation is a spider in a web. Andrew Bird, Senior Vice President at West, speaking at WSO2Con USA 2015, described it as a 2.5-billion dollar giant situated right at the heart of America’s telecommunications. Close to a third of the world’s conference calls run through the West network. To give you some perspective, Google+ and Cisco run calls on West networks - as does the 911 call system.

According to Andrew (who runs product management, development and innovation there) depending on where you are in America, 60% of the time, any call you place would go through the West network.

However, networks aren’t all that West does. West has a division called West Interactive Services which builds IVR systems for customers that need complex customer interaction networks. Here’s what Andrew had to say about how West Interactive used integrated, modular WSO2 middleware to drastically speed the delivery of service and enhance these systems - for both the customers and for themselves.

To represent its work, Andrew played a demo where a customer dials into a call center from an iPhone. The automated system on the other end recognized the customer, recognizes that fact that he is on a mobile device and addresses him by name. It then proceeds to interact with the customer via text and speech - all of this without needing an app.

Context is key here: Andrew Bird - and West - believes that customers should not have to repeatedly tell systems who they are. They should not have to waste time identifying themselves, their devices and the context in which they’re calling. Systems should be able to figure out that Mr Smith is calling from such and such a location and that’s probably because of this reason. West’s systems are designed to understand this kind of context, and they’re very good at it.

The solution: a middleware platform for West

But of course, building is not enough: scaling these kinds of systems is the challenge.

At some point, West apparently realized that while they were the best at scale, running “a couple of complex event processing engines, a couple of business rules managing engines, a couple of databases” - was neither sustainable nor particularly supportable. For one customer, for instance, they were managing 43 APIs, all of which were completely different. They needed everything on common standards, able to work with each other instead of in little silos of their own.

West’s solution was to build cloud-enabled middleware platform that sits between West’s proprietary services and the applications running across different channels. West’s managed services are exposed through the platform via APIs. 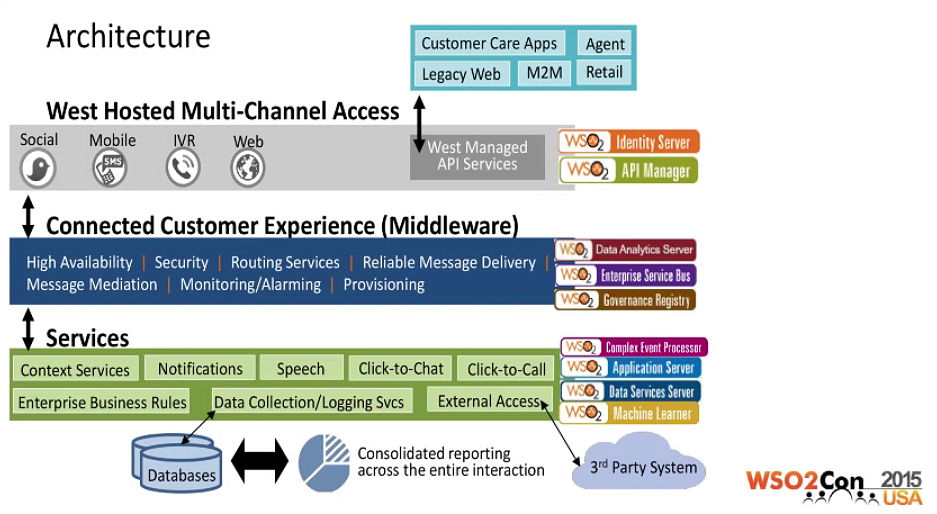 Other, more specific functionality is provided by the likes of WSO2 Complex Event Processor, Application Server, Data Services Server and Machine Learner. The multi-channel access services  - those that face the world - rely on WSO2 Identity Server and WSO2 API Manager, providing a way to expose APIs to internal or external applications that may integrate with the platform.

For West to rely on WSO2 for the backbone of their middleware platform is, for us, an indicator of the amount of faith they have in our products. West, after all, is a company that supports some of the biggest organizations in the world. They cannot afford to fail.

But perhaps the best statement was Andrew’s recollection of how much their customers trust WSO2. “I was once meeting with a customer, talking about our vision,” he says, “and they were like ‘so what are you using for an ESB?’ I said, "WSO2". No more questions. Done. They were using the same thing as well. I needed something like that - something where if I go talk to a customer who I’m trying to take care of, I don’t need to spend my time justifying myself.”

If you’re interested in knowing more, check out Andrew’s complete keynote talk at WSO2Con USA here. For more details on the deployment, read our case study on West Interactive here.