WS-Reliable Messaging is a very useful feature which will need to be available in any Web services framework. With Reliable Messaging users will be able to guarantee the delivery of their Web service invocations which is an inevitable feature when it comes to real business applications. Apache Sandesha2 was born to fill this gap for the latest and most promising open source Web service framework Apache Axis2. Later WSO2 Web Service Application Server (WSO2 WSAS) for Java was born combining Apache Axis2/Java, Apache Sandesha2/Java and several other open source products.

When it comes to real business scenarios it is very important to clearly define the storage media that is used to store data. For example, a particular company may have an Oracle database deployed, and they may want to run all their softwares based on this database. Now if they need to run a Apache Axis2 or WSO2 WSAS they will most probably want the data of all the supporting modules of those servers also to use same database. So they will most probably expect the data of Apache Sandesha2 to also be stored in the same database or the same storage media. Due to the StorageManager based architecture of Sandesha2 you can easily do this as explained later in this article.

This section will give you a introduction to how the Storage Framework is placed inside the overall architecture of Sandesha2. It will also introduce the internal components of the storage framework and show how these components fit together. Following diagram gives a clear view of the Sandesha2 overall architecture and shows how each component of Sandesha2 is working with the Storage Framework. 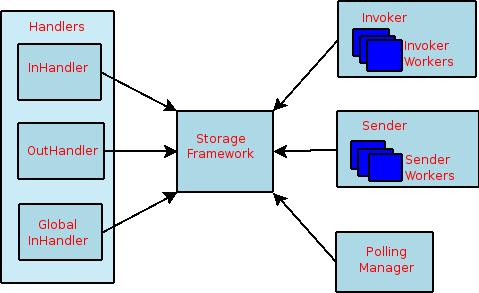 As shown in the diagram, almost all the components in Sandesha2 interacts with the Storage Framework. Storage Framework serves all other components through its interface which could be used to manipulate RM (Reliable Messaging) data or to work with transactions.

For clarity and readability I removed some parts from the class and grouped the abstract methods to show common methods together. When you want sandesha2 to work on a particular storage mechanism you have to either create an implementation of this Storage Manager interface or find an existing implementation that suits your needs. Now I will try to describe the functionality of each of the abstract methods defined in the above interface.

This method should be used to initialize the StorageManager implementation. This gets called only once during the runtime of a Sandesha2 instance basically at the initiation of the module.

Each RMSBean represents a sequence on which the particular Sandesha2 instance works as a RM Source. RMSBean defines several properties that represents various values of that sequence. For example this include the sequenceId of that sequence and the internal sequence Id.

Invoker is also another thread that will get started by a Sandesha2 instance. The invoker is used when message ordering is enabled and helps to do the ordering of messages in the order of message numbers. An InvokerBean entry represents a certain message that has to be invoked and defines several properties that will be used by the Invoker when doing its invocation.

These beans are used to hold properties of incoming or outgoing sequences. These are basically used to hold values that were not covered in RM Source (RMS) or RM Destination (RMD) beans. The SequncePropertyBean basically defines three properties- the property key of the sequence (which may be the sequenceId), the name of the property to be stored and the actual value. There are also several special purpose sequence property beans which are not directly bound to a particular sequence. One such property is used to store the Ids of all the sequences which are currently activated in the system.

Getter method for the Transaction object

Getter methods for the Sender and the Invoker

Sender and Invoker are two threads managed by Sandesha2, each managing its own worker thread pool. Sender is responsible for transmission and retransmission of messages while the Invoker is responsible for the ordered invocation of messages. These two methods return the Sender and Invoker object that should be used with the respective StorageManager.

As mentioned above there could be various StorageManager implementations based on various types of storage mechanisms. This coming sections will introduce two such implementations.

WSO2 provides a hibernate based persistent StorageManager implementation for Sandesha2. The sources code for this can be downloaded from WSO2 Oxygen Tank svn page. An official release is not available by the day I write this article. For more information on using and configuring this StorageManager implementation please refer to the WSO2 Oxygen Tank.

Creating your own StorageManager implementation

Implementing your own StorageManager is a matter of implementing a set of interfaces given by Sandesha2 using your storage mechanism.

Your first focus should be trying to implement the five BeanManager interfaces. All these interfaces are having simple methods such as create, retrieve, update, delete and find. Implement these so that they perform these operations on the respective beans to manipulate them according to your storage mechanism.

After implementing these basic interfaces you can implement the StorageManager interface. This implementation have two simple return instances of the BeanManagers and the Transaction you implemented.

Freely use Sandesha2 module.xml to hold any properties that will be needed by your StorageManager implementation. Or else, it is also possible to use an external configuration file.