I'll be doing a talk at the Open Source Developer Conference (OSDC) - Auckland - tomorrow and thought of putting few notes here related to my talk. 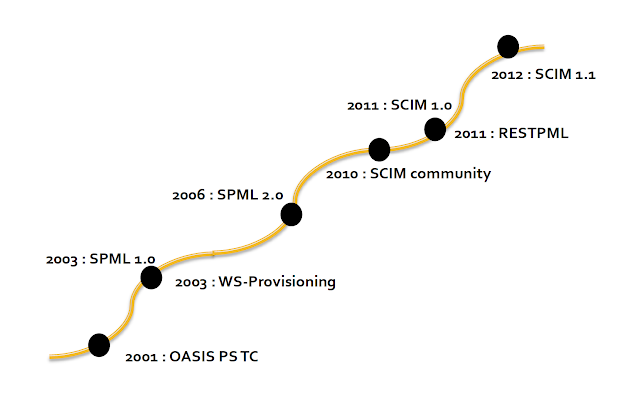 OASIS Technical Committee for Service Provisioning was formed in 2001 to define an XML-based framework for exchanging user, resource, and service provisioning information. As a result, the SPML (Service Provisioning Mark Language) came up in 2003 - which was based on three proprietary provisioning standards by that time. IBM and Microsoft played a major role in building the SPML 1.0.

SPML 1.0 defined a Request/Response protocol as well as couple of bindings. Requests/Responses - all based on XML. Each operation has it own schema.

One of the bindings defined in SPML 1.0 is the SOAP binding. It says how to transfer SPML requests and responses wrapped in a SOAP message. All the SPML operations supported by the provisioning entity should be declared in the WSDL it self.

The other one is file binding. This binding refers to using SPML elements in a file, typically for the purposes of bulk processing provisioning data and provisioning schema documentation.

In the closing stages of SPML 1.0, IBM and MSFT felt strongly that support for complex XML objects needed to be done differently. The OASIS TC voted to postpone this effort until 2.0. As a result, IBM unofficially stated that they wouldn't be implementing 1.0 and would wait on the conclusion of the 2.0 process.

WS-Provisioning is part of the Service Oriented Architecture and has been submitted to the Organization for the Advancement of Structured Information Standards (OASIS) Provisioning Service Technical Committee.

OASIS PSTC took both SMPL 1.0 and WS-Provisioning specification as inputs and developed SPML 2.0 in 2006.

SPML 1.0 has been called a slightly improved Directory Services Markup Language (DSML). SPML 2.0 defines an extensible protocol (through Capabilities) with support for a DSML profile (SPMLv2 DSMLv2), as well as XML Schema profiles. SPML 2.0 differentiates between the protocol and the data it carries.

The SPML 2.0 protocol enables better interoperability between vendors, especially for the Core capabilities (those found in 1.0). You can “extend” SPML 1.0 using ExtendedRequest, but there is no guidance about what those requests can be. SPML 2.0 defines a set of “standard capabilities” that allow you to add support in well-defined ways.

SPML definitely addressed the key objective of forming the OASIS PSTC in 2001. It solved the interoperability issues. But - it was too complex to implement. It was SOAP biased and was addressing too much of concerns in provisioning than what actually was needed.

In parallel to the criticisms against SPML - another standard known as SCIM (Simple Could Identity Management) started to emerge. This was around mid 2010 - and initiated by Salesforce, Ping Identity, Google and others. WSO2 joined the effort sometime in early 2011 - and took part in all the interop events happened so far.

SCIM is purely RESTful. The initial version supported both JSON and XML. SCIM introduced a REST API for provisioning and also a core schema (which also can be extended) for provisioning objects. SCIM 1.1 was finalized in 2012 - and then it was donated to the IETF. Once in IETF, it has to change the definition of SCIM to System for Cross-domain Identity Management and it's no more supporting XML - only JSON.

As a result of the increasing pressure on OASIS PSTC - they started working on a REST binding for SPML - which is known as RESTPML around 2011. This is still based on XML and not yet active so far.