Eclipse BPS BPEL Exporter plugin is to export a bpel project that was created by Eclipse BPEL Designer plugin. Artifact which is created from exporter plugin can be deployed in WSO2 BPS or in ODE.

After successfully installing eclipse BPEL Designer Plugin, you will have the option of selecting BPEL project as you select other types of projects in eclipse environment.

Before you start step 1, please make sure you run the ODE server at least for once. If not, it may not be visible in the Target Runtime window.
Go to new → other → Bpel 2.0 → Bpel Project and then click next. 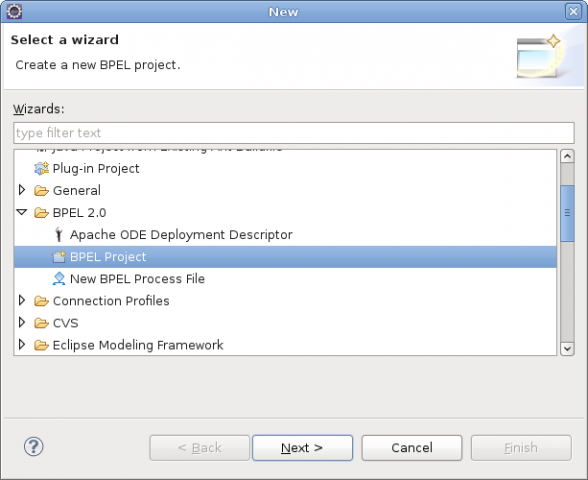 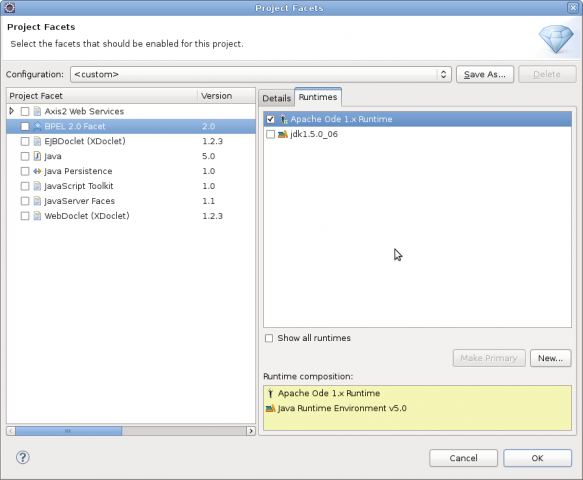 Now the wizard will be as follows. 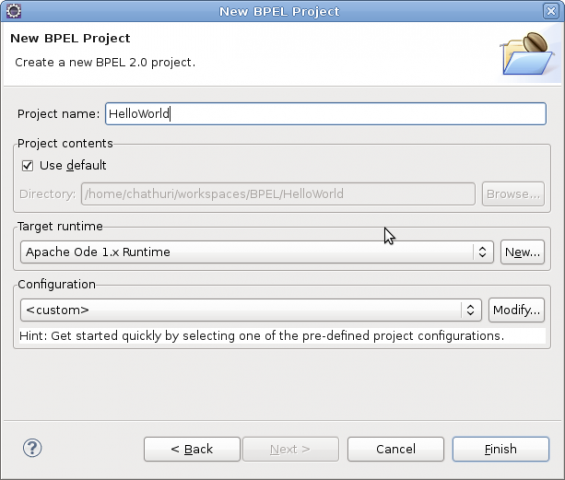 Your helloworld bpel process will be as follows. 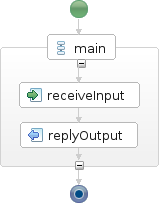 And the workspace will be as follows. 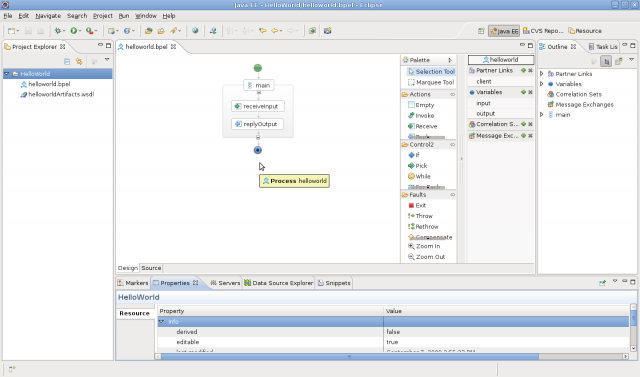 Click on recieveInput and view at the Properties window and leave them as before. 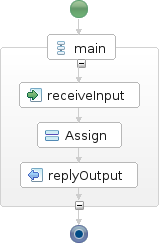 Now open the WSDL file in the Design view and add a New Service and a New Binding by right clicking on the design view. Select the Binding element in the properties window and in the General tab click Generate Binding Contents. Then you will see Binding Wizard will appear. At the Binding Details page  select the Port Type as helloworldport and Protocol as SOAP and SOAP Binding Option as document literal. Give the Binding Name as helloworldbinding. 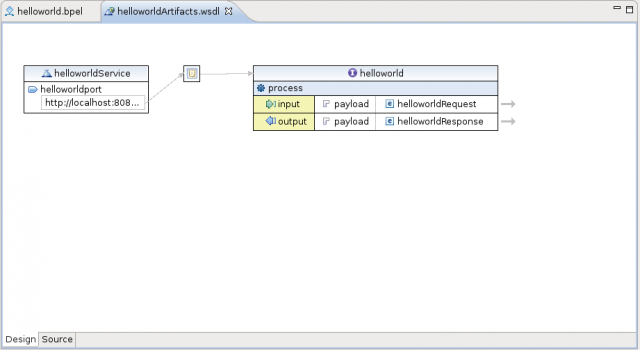 To deploy the process in ODE, you have to create a deployment descriptor file. For that right click on the HelloWorld bpel project and go to new → other → BPEL 2.0 → Apache ODE Deployment Descriptor and click next. In the pop up wizard, check whether the correct BPEL project (i.e. HelloWorld) is selected and then click finish.

Open the deployment descriptor file (deploy.xml) in  the editor and at the Inbound Interfaces section under the Associated Port tab select helloworldport from the drop down list that will appear. Just click on the other tabs and you will see necessary details are filled automatically. Now deploy.xml will be as follows. 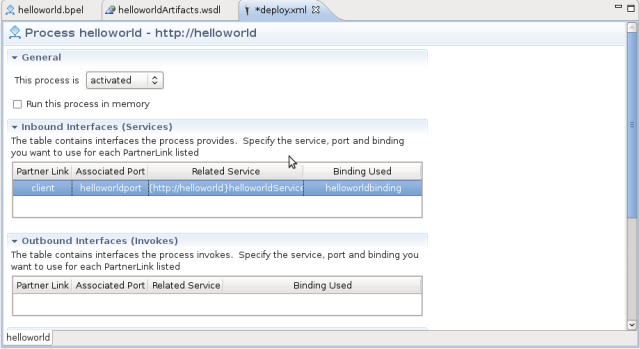 Now your process is ready to be deployed in ODE. To deploy it in WSO2 BPS, you have to make it a zip file. For that Eclipse BPS BPEL plugin will be helpful.

Go to Tomcat webapps directory. There you will find a directory called “ode”. If you cannot find that directory, you have to run tomcat server at least for once, after copying ode.war file into webapps directory of tomcat. Go to tomcat/webapps/ode/WEB-INF/processes directory and create a folder copying .bpel file (i.e. helloworld.bpel), .wsdl file (i.e. helloworldArtifacts.wsdl) and ODE deployment descriptor file (i.e. deploy.xml) then run tomcat server if the server is not already in started state. When you start ODE (http://localhost:8080/ode) you will see extra file with the extension .deployed will be created in tomcat/webapps/ode/WEB-INF/processes directory. In the browser go to processes link of Apache ODE homepage and you will see helloworld process has been deployed (see below image). 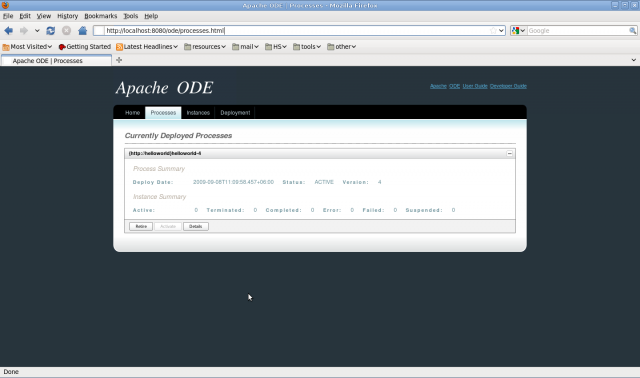 In this tutorial we assume you have already installed Eclipse BPS BPEL Exporter Plugin in your eclipse.

Import the created BPEL project into the workspace if your workspace does not include needed BPEL  project already. This can be done by clicking file → import → General → Existing Projects into Workspace and click next.  Select the directory of BPEL project and click finish.

Right click on the BPEL project and select Export. In the Export window select WSO2 BPS Bpel Artifact under WSO2 Exporter and click next. 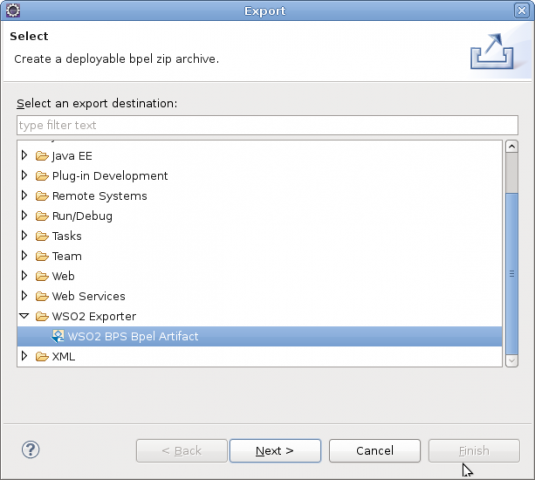 Select the BPEL project and location where you want to save the created artifact and click finish. 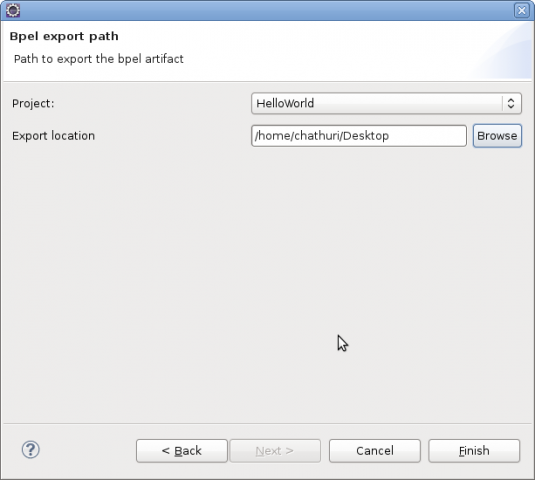 Now you will have the BPEL artifact that can be deployed in WSO2 BPS.

Run WSO2 BPS by going to wso2bps-1.0.1/bin in the command prompt and run wso2server.sh / wso2server.bat. Go to https://localhost:9443/carbon and log as admin.  Click Add BPEL under Business Processes and browse for the path of the BPEL artifact you just created from plugin and click upload. If  there are no errors, you will get a message saying “upload successful”.  From the services list, you can check whether the uploaded artifact is there.

You can try the service by clickng “Try this service” option.