WSO2 WSF/C++ is released under the popular Apache license, Version 2.0, and provides a C++ alternative to most WS-* projects at the Apache Software Foundation. For instance, using WSO2 WSF/C++, you can use Apache Axiom in C++ instead of C. This means that you can now work with objects implemented using classes in C++, instead of in C.  Future versions of WSO2 WSF/C++ will bring the complete WS-* support and most tools found in WSO2 WSF/C, which will provide reliability, security, policy and eventing support  - all as a part of a single package, with a C++ based API. WSO2 WSF/C++ is designed to inter-operate with Microsoft .Net, WSO2 Web Services Application Server, WSO2 Web Services Framework for C, PHP, Ruby, Perl, JavaScript and more (see a complete list at [3]), and also many other J2EE based implementations in the very manner WSO2 WSF/C does.

WSO2 WSF/C++ can be readily integrated with any C++ application and is available for both Windows-based and Unix-based platforms, making cross-platform development easy. The Apache 2.0 license makes it possible to use WSO2 WSF/C++ within most of your projects without having to bother with complex licensing issues. 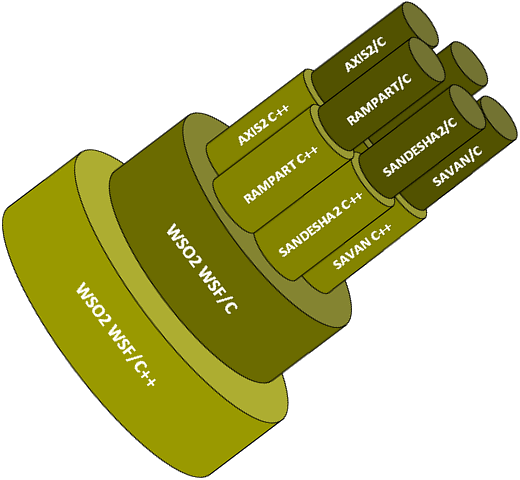 Not implicit in this diagram is the abstraction of the environment-related aspects in WSO2 WSF/C++, which are different from WSO2 WSF/C. The developers do not need to bother with handling the underlying environment and passing references of the Axis2 Environment to each and every object. Also, overloaded methods are provided, giving you a convenient range of new options and a better organized API.

WSO2 WSF/C++ have also added detailed exception-handling mechanisms which have been carefully implemented to suit both Unix- and Windows-based environments in the very same manner. The library also comes with the public vs. private API concept in its Windows-based version, meaning that you are exposed to only the API you require through a well-defined interface of exports. Axis Faults are now not limited to simple messages as in Apache Axis2/C and WSO2 WSF/C, but presented as exception objects making solution development much easier.

The Service Client API is tailored to include most of the common client-side requirements as a part of single object while encapsulating resources into independent objects such as Options. This helps the Web service developer not worry about handling multiple objects in order to get the job done, and also makes complex dependency issues easier to organize.

WSO2 WSF/C++ comes in a range of distributions tailored to suit various requirements and especially various operating systems. Depending on your requirement and your operating system it is recommended that you select the distribution package that best suits you. In order to make the process much easier to understand I have separately explained the process for Windows-based and Unix-based systems.

This section is intended for developers and users who wish to use WSO2 WSF/C++ on a Microsoft Windows-based system. If you are on a Unix-based system, skip to section 3.2. To begin, you need to install a list of dependent libraries. Please note that you may not need to install all libraries mentioned below, depending on your current system configuration. You are advised to contact your system administrator for further information. If you want to use to the binary distribution click here.

To install WSO2 WSF/C++ on your system, follow the procedure below:

This section is intended for developers and users who wish to use WSO2 WSF/C++ on a Unix-based system. If you are on a Microsoft Windows-based system, see section 3.1. To start with, you need to install a list of dependent libraries. Please note that you may not need to install all the libraries mentioned below depending on your current system software configuration. You are advised to contact your system administrator for further information.

To install WSO2 WSF/C++ on your system, follow the procedure below.

For more information refer the latest installation guide at [4].

Like WSO2 WSF/C, there are many samples that are available as a part of the distribution. In the Binary distribution, you can find several samples in the WSFCPP_HOME/samples/bin/ folder. The most basic of these samples, the echo client, is found inside the samples folder. To run the echo client simply run the executable:

You should receive an output on the console indicating the success of the operation. For source distributions, you are required to build the samples (which is an automated step in the build process, unless you explicitly exclude it).

Creating a Web service Client is relatively easy with WSO2 WSF/C++ when compared to WSO2 WSF/C and other similar libraries. Creating a client similar to the echo client is just as easy as running the client.

To start with, we require several includes. You may or may not use the namespaces, but using them makes your life easy. The wso2wsf namespace is used by various classes found in WSO2 WSF/C++. The initial includes and namespace block are shown below:

Next, we create the SOAP client by passing the location of the service as a parameter. There are various other constructors available for this purpose, and you may refer to the complete API documentation for more information. The Environment is initialized as the first step. This step will setup the environment and other related infrastructure components. In this example, we also engage the WS-Addressing module to the Service Client. You may also engage other standard and/or custom modules in the very same manner. More information is found in the complete API documentation. The code shown below demonstrates this:

The payload is constructed in the next four steps, which needs no further explanation. More information on how to use the C++ API to Axiom is found as a part of the WSO2 WSF/C++ documentation. The next step will generate a request using the constructed payload and obtain the response sent. An exception will be thrown, should there be any error in the process.

Some freeing of resources is the final step. As in C, you need to make sure that you free the memory you allocate. However, an exception is that, if you free a parent node in an Axiom Tree, the child nodes, attributes and associated namespaces will automatically be freed. Creating your own custom client involves customizing the steps mentioned above. You may also be interested in using the Service Client Options object to provide more configuration details. The examples bundled with the distributions show how this can be achieved.

WSO2 WSF/C++ also supports several advanced features such as asynchronous operations using callbacks. All what you need to do is write an implementation of the ICallback interface, as shown below:

A few additional samples on how to use SOAP version 1.1, and how to use a security policy can be found as a part of the distributions, as well as several clients written for real-world Web services such as Yahoo, Google and Flickr search services.

WSO2 WSF/C++ provides everything from the WSO2 WSF/C library in a user-friendly 100% C++ API. The library saves you from all the trouble from having to collect various bits and pieces together to build a solution for creating and consuming Web services. This tutorial provides a basic introduction and step-by-step instructions for creating your very first Web service client with WSO2 WSF/C++. This work builds upon the Dummy's Guide to WSO2 WSF/C by Malinda Kaushalye Kapuruge[5]. For more information, you are advised to use the mailing lists, and the User Forum.