Blockchain has been capturing the imagination of businesses and government organizations alike. But it can be difficult to separate the hype from the real potential of this technology. With that in mind, we wanted to take a systematic approach to evaluate it. To do so, we used the Emerging Technology Analysis Framework (ETAC), which takes a broad view of emerging technology by probing impact, feasibility, risks, and future timelines.

Additionally, while during our research, we soon came to understand that blockchain is many things and it is hard to talk about blockchain holistically. Therefore, we identified 10 categories of blockchain use cases to focus on in our evaluation.

These use case classes are identified in the following figure. 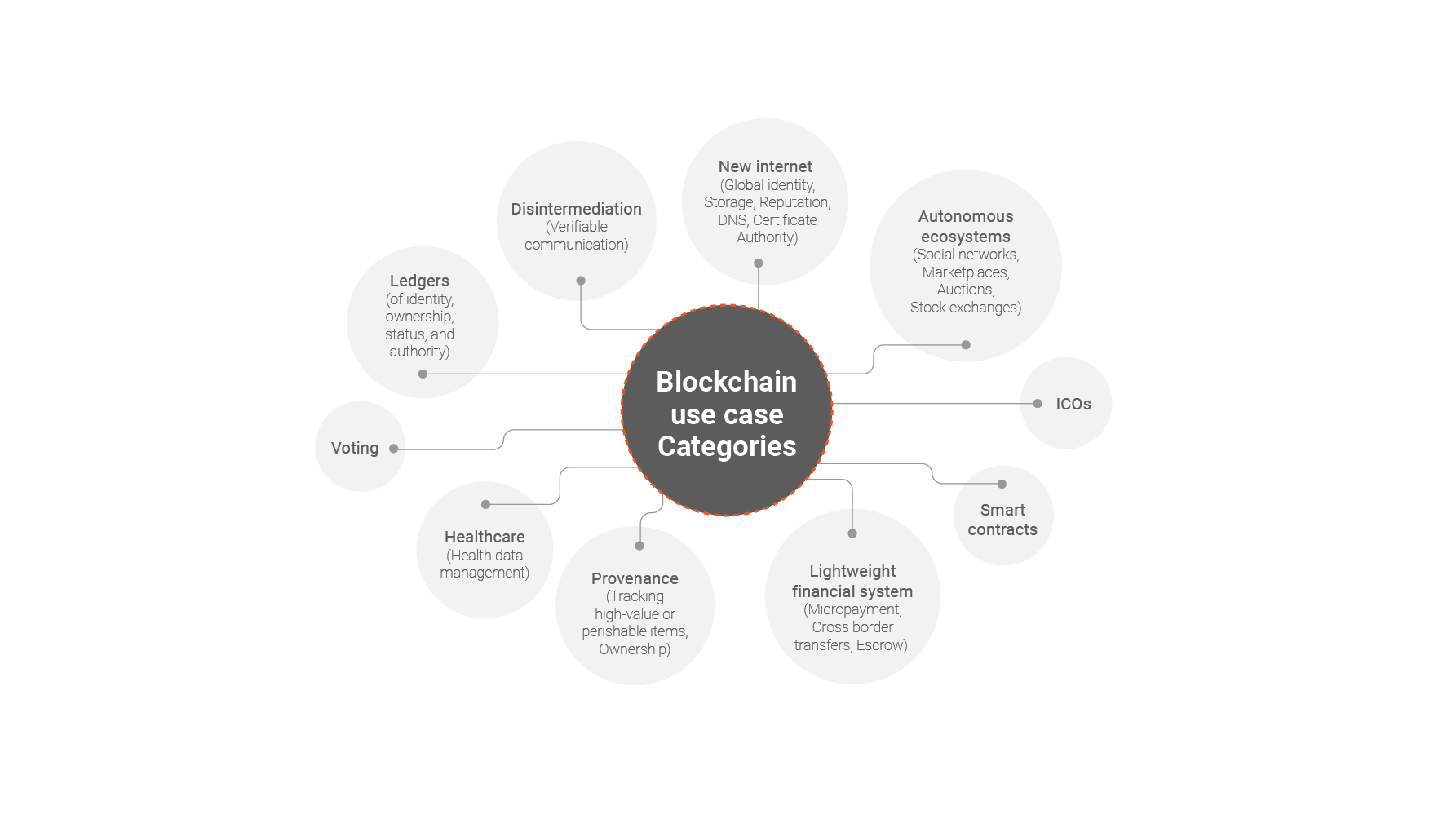 Here is a summary of our observations around the impact, challenges, and risks of adopting blockchain, and how each of the above use cases is affected.

Blockchain provides an immutable decentralized ledger. We can use this ledger to improve trust. This happens in three key ways.

First, blockchain provides each participant with an identifier and a means to manage verifiable claims, such as certificates of his name, education qualification, and birthday, among others. For example, we can use two W3C specifications - decentralized Identifiers (DID) and verifiable claims - to implement the above security scenarios. This enables two parties, who do not know each other, to verify the other and know his or her attributes, thus establishing trust. This has several advantages:

Blockchain provides a way for multiple parties to communicate or work together in an auditable manner. This again removes costly processes (e.g. lawyers or other intermediaries) to establish trust between two parties. This also contributes to the resulting system being more cost-effective and agile.

The blockchain is decentralized. No single user or a small group of users can change the blockchain, giving us a trustable source to manage ultra-critical systems. This elevated level of trust enables use cases that were not possible before, for example, global reputation and voting.

When evaluating blockchain, we distinguished between challenges and risks. What we regard as challenges are technical limitations that are likely to be fixed in the future. In contrast, risks are inherent to the nature of the blockchain and are unlikely to change.

For blockchain, we have identified four technical challenges - limited scalability and latency, limited privacy, storage constraints, and unsustainable consensus. Let us take a closer look at each of these.

Limited scalability and latency: At the time of writing this blog, a bitcoin transaction takes about 8 minutes and can support only about 2 to 3 transactions per second. Most use cases that we evaluated are not feasible under these limits. For example, to handle global-scale systems such as a decentralized internet, blockchain needs to handle tens of thousands of transactions per second. However, it is worth noting that this is decided by the choice of consensus algorithm. Private blockchain implementations have proposed faster algorithms although they provide lesser guarantees.

Limited privacy: Blockchain provides pseudo anonymizations. However, by analyzing the transaction graph and other related information, it is often possible to link users to transactions. Once one transaction is linked to a user, all his transactions become known.

Unsustainable consensus: The current consensus method is cumbersome and consumes a significant amount of energy. For example, if considered as a country, Bitcoin energy consumption would be ranked at 39th in the world, which is higher than the energy consumption of Australia.

Irrevocability: The irrevocability of transactions is a significant risk. For use cases such as bitcoin and land registry, a resource is passed from one owner to another, and only the current owner has the ability to assign it to a new owner. For this and similar use cases, irrevocability can have devastating consequences. However, for most other use cases, this can be addressed via a recovery transaction that undoes the original transaction.

Regulator absence: Another risk is regulator absence. A regulator plays a key role in some use cases. For example, in the case of a stock market or share offering, oversight makes sure that all parties are protected. Without a regulator, it might not be easy to detect and avoid pyramid schemes and other types of fraud. Although not popular, regulators play a crucial role in many systems. In their current form, blockchain-based systems do not support a regulator. Also given irrevocability, it can either be impossible or expensive to fill the missing regulator’s role.

Misunderstood side effects: The impact of blockchain extends beyond computer science. We need to understand the economic, social, and political side effects of the blockchain.

Fluctuations in Bitcoin prices: Another risk is fluctuating bitcoin prices. However, many believe that this is because it is new. Its intrinsic value is hard to judge and will stabilize over time (see Barker [2017]). With high bitcoin values, transaction charges are also high, making them unattractive for many use cases (such as micropayments). It seems that the deflationary nature of Bitcoin and broad transformative use cases are in conflict due to the transaction costs. This problem will escalate with time.

Unclear regulatory responses: As we discussed under impact, blockchain changes many interactions and transactions that are currently governed by regulations and laws. Therefore, we are likely to see future regulations and laws governing blockchains and their use. Responses of these institutions are not clear and the associated uncertainty creates risks for anyone adopting bitcoin.

Analysis of Use Cases

For each of the ten use cases we focused on, we identified the challenges and risks associated with both public and private implementations. Additionally, in our conclusions, we include the European Union Technology Readiness Level (EU-TRL) for each use case. The following table summarizes our analysis. 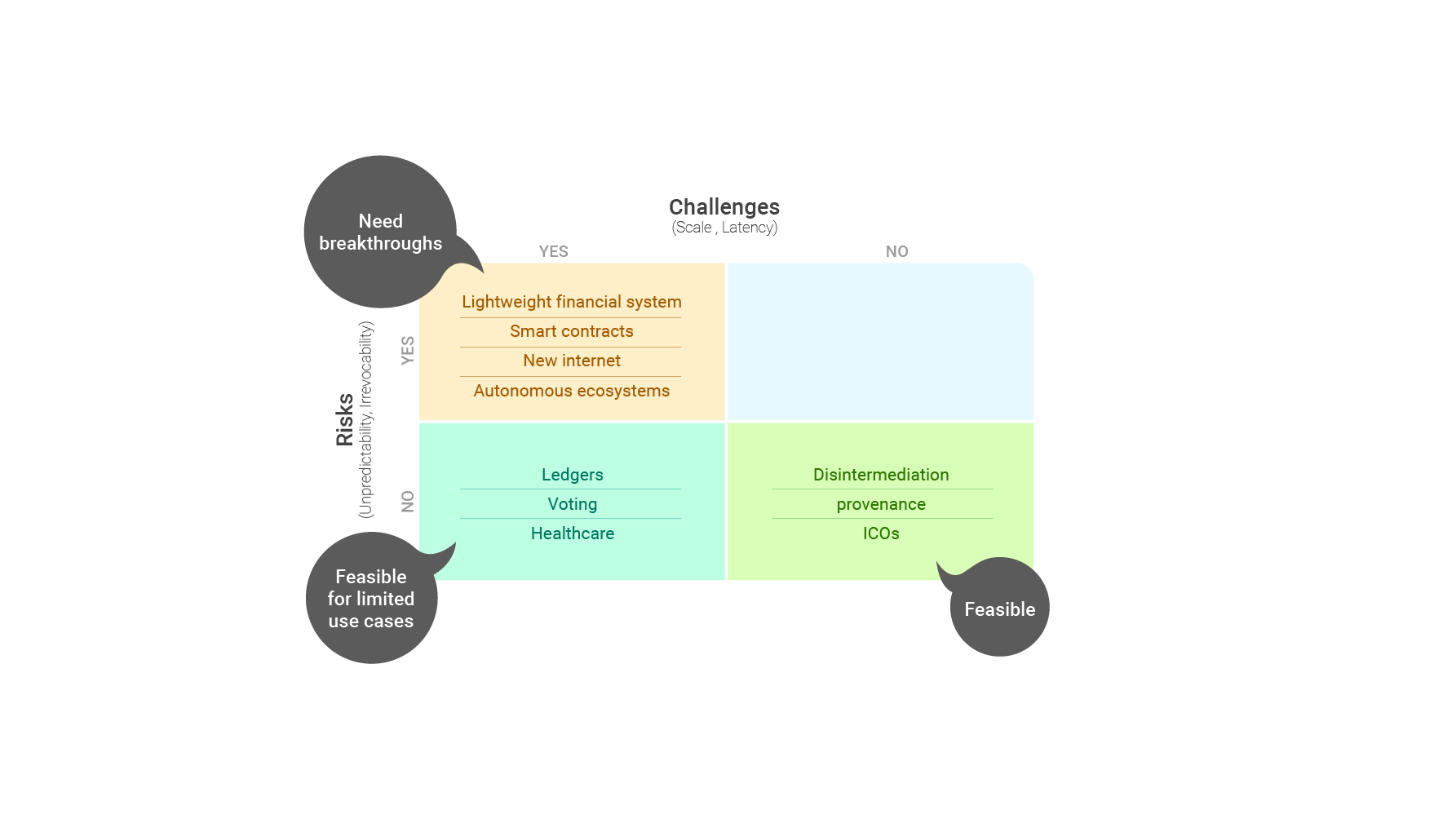 From the analysis above, we have made 6 assertions:

A detailed review of our blockchain analysis using ETAC can be found in our recently published paper, “A Use Case Centric Survey of Blockchain: Status Quo and Future Directions."