Figure 1: On the Internet, nobody knows you are a dog! (Source: Twitter)

Centralized Identity - What’s Wrong With It?

On the Internet, anyone can represent any identity, and it's difficult to verify those identities. Think of an organization that needs to track the activities of thousands of employees who work from all around the world. This can be a headache for the management. That’s how identity management became a fundamental requirement for any computer system. You can find the key terms related to identity management in the Additional Info section at the end of this blog.

Currently, most systems use centralized identity.

In centralized identity management, identity data is handled by a trusted central party on behalf of the identity owners. This produces the following problems:

Lack of Transparency and Control to Identity Owners

Another downside is the lack of controllability of your own data. Have you ever tried to delete your Facebook profile? You can’t entirely delete it. The information belongs to you, but you have no control over it, even to delete it.

Identity honeypots are computer systems which consist of massive personal identifiable data. In centralized identity management, the identities are usually stored in one place, which creates an identity honey pot.

You might think that if you’ve stored your identities in a secure place, this won’t be a problem. But there isn’t a 100% secure system in this world. Every system is vulnerable. It’s a matter of time until an attacker finds the vulnerability. For example, Google is considered a tech giant in the computing world. But in 2014, 5 million email addresses and passwords were stolen including my email address and password. It was terrifying to see my password on a public database.

The History of Identity

If we know the problems, why didn’t we use the decentralized identity management approach earlier?

Therefore, most identity management systems gave up on decentralization. For example, our email addresses are secure (hypothetically) and mnemonic, but not decentralized.

But the trials to decentralize identity management did not stop.

Self-sovereign identity was born to give full control to the identity owners. For more details read The Path to Self-Sovereign Identity.

Figure 4: The evolution of identity

The concept of self-sovereign identity was well defined with decades of experience. Let’s discuss what it really is.

According to the Sovrin foundation, the following are the principal goals of sovereign identities and its management:

The above principal goals are achieved by maintaining the following properties:

For an identity to become truly self-sovereign, the infrastructure of the identities should reside in a

Indy shares three important virtues with the Internet: No one owns it. Everyone can use it. Anyone can improve it. (Phillip Windley, Sovrin Foundation)

First, the users can choose a human-memorable name for their identity. Then the platform converts the name to a unique identity called DID (decentralized identifiers). For example:

For more details go to https://w3c-ccg.github.io/did-spec/#the-generic-did-scheme.

Each DID record is assigned with a public-private key pair where the signatures of the documents can be created using the private key and the signature can be verified using the public key. A corresponding public key is published in the DDO under ‘piblicKey’. Each DID is associated with a separate DID method specification which is specific to a ledger or network. A DID method specifies the set of rules related to registration, resolution, modification, and revocation.

Since the ledger is public, it should not expose any Personally Identifiable Information (PII) directly on the ledger. To achieve the privacy of the public ledger, only the following items are stored in the ledger:

The above four basic pieces of data represent the identity owner through the off-ledger agents. 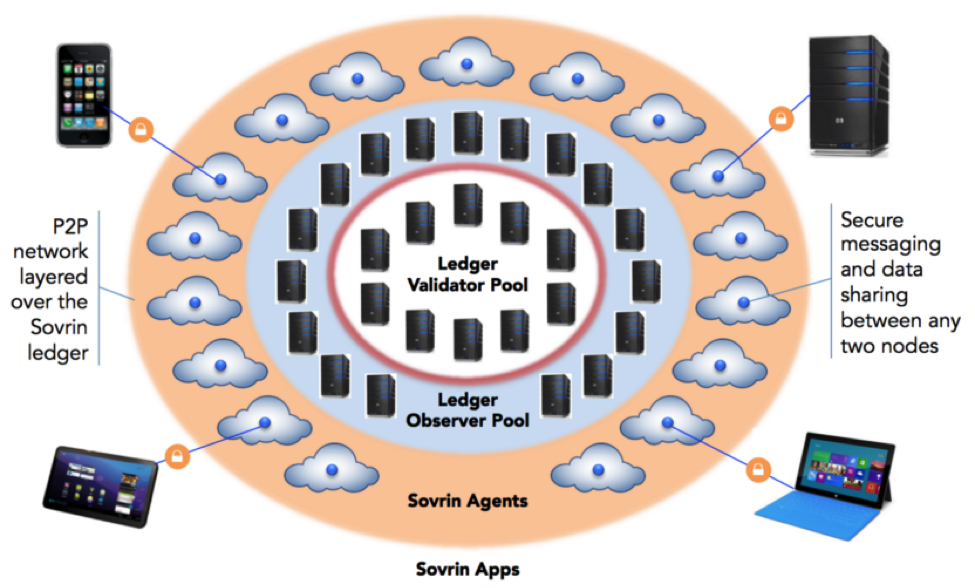 A claim becomes a verified claim if there is proof of the claim. Indy supports cryptographically secure verifiable claims as follows. Let’s think Alice wants to prove her medical license to the hospital where she works at. 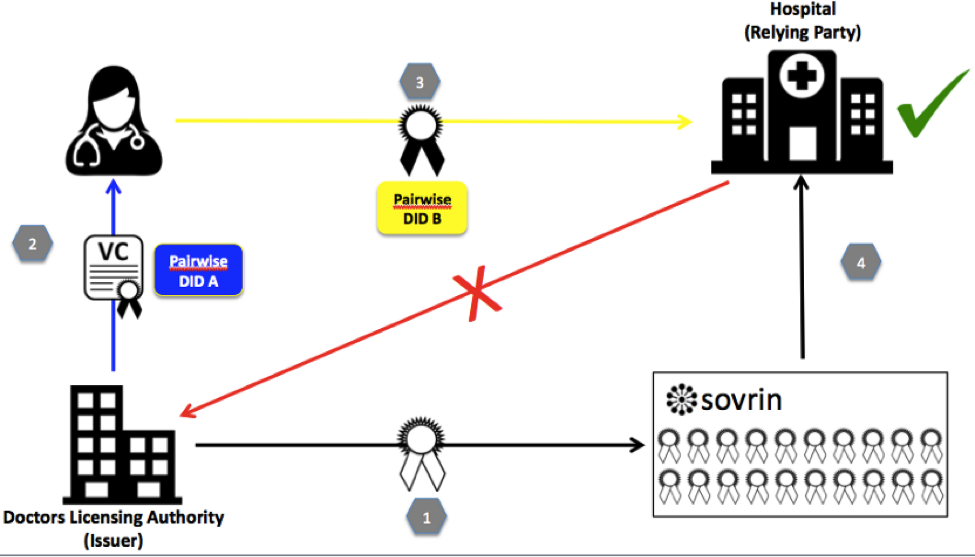 Interoperability of Decentralized Identity Across DLTs

In self-sovereign identities, the hierarchical Public Key Infrastructure (PKI) model is replaced by the DID/DDO model. The peers in the network use their own DDOs as the root of trust. But DID and DDO key material and metadata can be used to generate an X.509 certificate which is the most widely established format. X.509 certificates can be used as verifiable claims with the DID/DDO model. In this way, hierarchical/federated identity systems can be coupled with decentralized identity systems.

A consensus is a process by which a network of nodes provides a guaranteed ordering of transactions and validates the block of transactions. (Hyperledger Architecture-Volume 1). Consensus must provide the following functionality:

In Indy, both ordering and validation are done by RBFT (see the Appendix). Because of that, both ordered and validated transactions are in a single Blockchain ledger. The state is the projection of the Indy Blockchain ledger. The state is kept in a data structure called a Merkle Patricia tree and stored in a database as a collection of variables and their values. Hyperledger Indy stores Decentralized Identifiers (DIDs) as state variables with current verification key.

Here, you can search for the terms that have been used in the article.

The Key Players in Identity Management

There are four key players in identity management:

In figure 11, the ID department (identity provider) issues an ID card to a person “P” who is the identity owner. “P” uses his ID card to create an account in a bank (identity user). 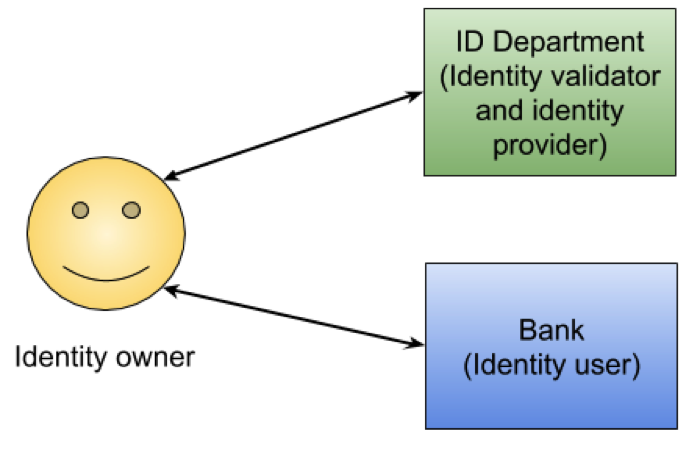 The Key Components of Identity Management

he followings are the general components of an identity management system:

RBFT is an advanced Plenum Byzantine Fault Tolerance (PBFT) mechanism. In RBFT, a single node called primary node proposes new blocks and others update their ledgers using the proposed blocks. But that primary node can be smartly malicious and degrade the performance of the system without being detected by correct replicas. As a solution for that, the primary node’s performance is periodically compared with the other nodes’ average performance.

Figure 8 shows the flow of updating the Blockchain ledger.

The primary node updates the ledger while sending the proposal and other nodes update their ledger after receiving the COMMIT messages. These updates are called optimistic updates because they are done by assuming the proposal will be accepted. If the proposal gets rejected after some time, then the ledger will be reverted. To accept a transaction which is followed by another transaction, the previous transaction must be visible to the state.