A Reference Architecture for Deploying WSO2 Middleware on Kubernetes

1. An Introduction to Kubernetes

Kubernetes is a result of over a decade and a half experience on managing production workloads on containers at Google [1].Google has been contributing to Linux container technologies, such as cgroups, lmctfy, libcontainer for many years and has been running almost all Google applications on them. As a result, Google started the Kubernetes project with the intention of implementing an open source container cluster management system similar to the one they use inhouse called Borg [1]. 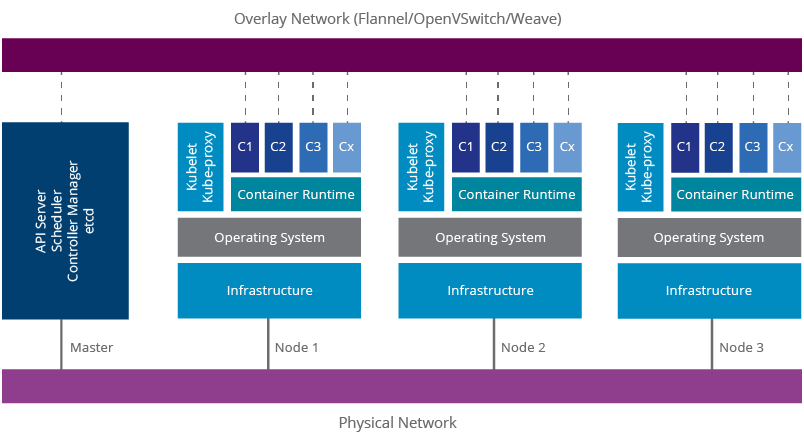 A Kubernetes cluster is comprised of a master node and a set of slave nodes. The master includes the Kubernetes

The nodes include Kubernetes

A Kubernetes production deployment may need multiple master nodes and a separate etcd cluster for high availability. Kubernetes make use of an overlay network for providing networking capabilities similar to a virtual machine-based environment. It allows container-to-container communication throughout the cluster and will provide unique IP addresses for each container. If such a software defined network (SDN) is not used, the container runtimes in each node will have an isolated network and subsequently the above networking features will not be available. This is one of the key advantages of Kubernetes over other container cluster management solutions, such as Apache Mesos. 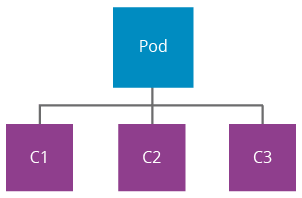 A pod [2] is a group of containers that share the storage, users, network interfaces, etc. using Linux namespaces (ipc, uts, mount, pid, network and user), cgroups, and other kernel features. This facilitates creating composite applications while preserving the one application per container model. Containers in a pod share an IP address and the port space. They can find each other using localhost and communicate using IPC technologies like SystemV semaphores or POSIX shared memory. A sample composition of a pod would be an application server container running in parallel with a Logstash container monitoring the server logs using the same filesystem. 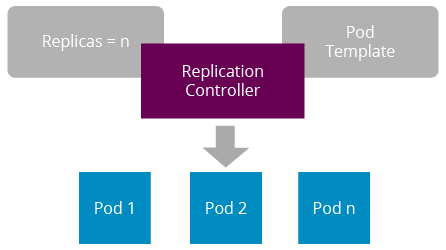 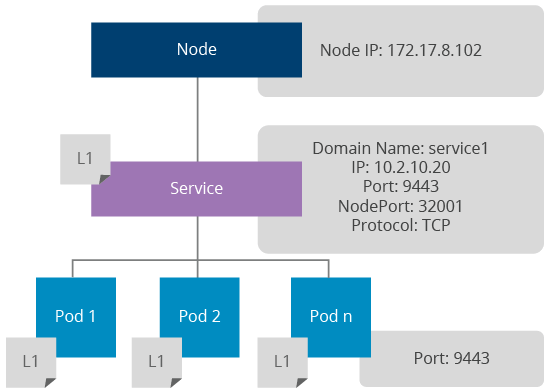 A Kubernetes service provides a mechanism for load balancing pods. It is implemented using kube-proxy and it internally uses iptable rules for load balancing at the network layer. Each service exposes a DNS entry via Sky DNS for accessing the service within the Kubernetes internal network. There are three service types:

The below sample kubectl command shows how an existing WSO2 ESB deployment can be updated using a rolling update:

Similarly, an application update done via a rolling update can be rolled back if needed. 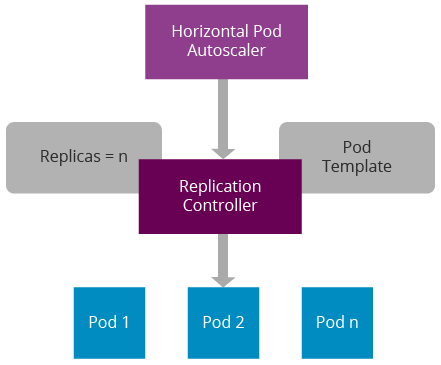 Horizontal Pod Autoscalers provide autoscaling capabilities for pods. It does this by monitoring health statistics sent by the cAdvisor. A cAdvisor instance runs in each node and provides information on CPU, memory, and disk usage of containers. These statistics get aggregated by Heapster and get accessible via the Kubernetes API server. Currently, horizontal autoscaling is only available based on CPU usage, and an initiative is in progress to support custom metrics.

Kubernetes uses the same method for sending the token needed for accessing the Kubernetes API server to the pods. Similarly, Kubernetes supports sending configuration parameters to the pods via ConfigMap API. Both secrets and config key/value pairs can be accessed inside the container either using a virtual volume mount or using environment variables. 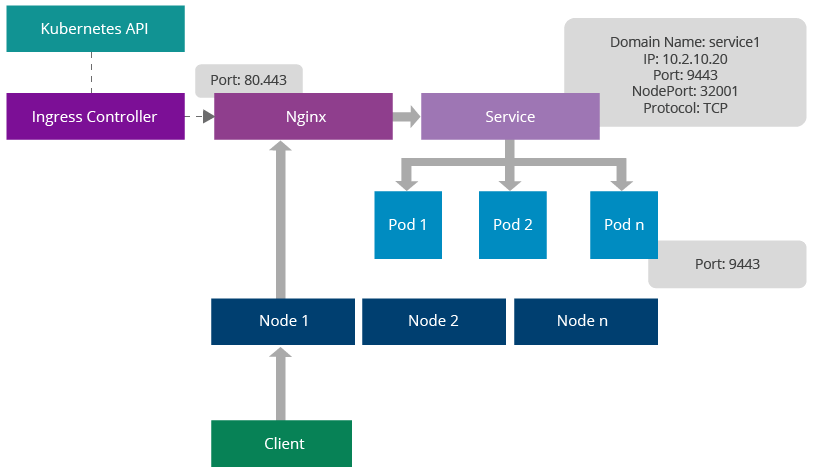 Kubernetes provides a mechanism for adding a proxy server for Kubernetes services. This feature is known as Ingress [3]. The main advantage of this is the ability to expose Kubernetes services via well-known ports, such as 80, 443. An ingress controller listens to Kubernetes API, generates a proxy configuration in runtime whenever a service is changed, and reloads the Nginx configuration. It can expose any given port via a Docker host port. Clients can send requests to one of the Kubernetes node IPs, Nginx port and those will get redirected to the relevant service. The service will do round robin load balancing in the network layer.

The service can be identified using an URL context or hostname;
https://node-ip/foo/, https://foo.bar.com/ 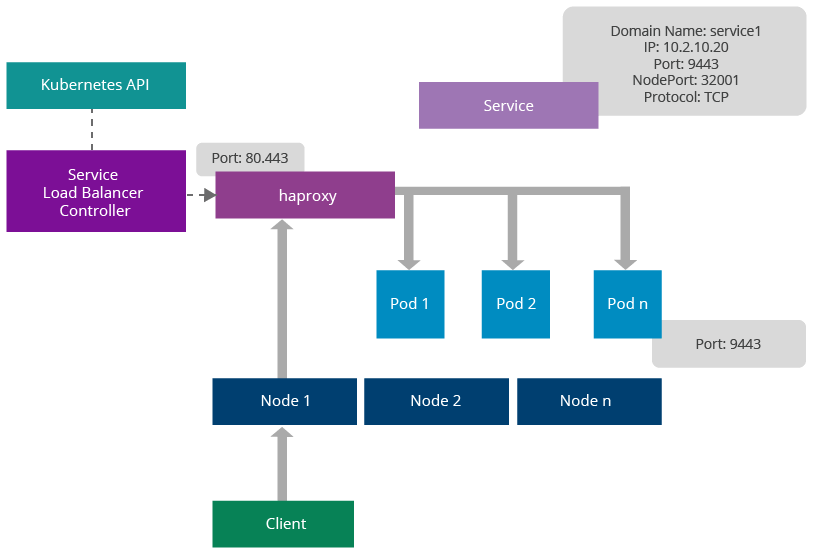 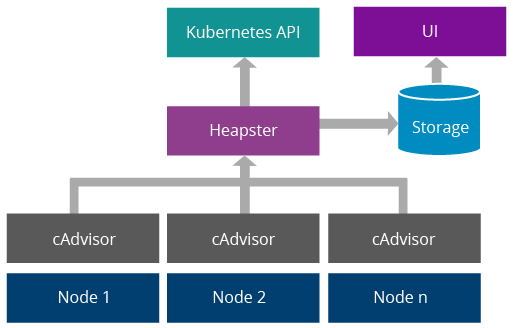 Kubernetes uses cAdvisor [5] for monitoring containers in each node. It provides information on CPU usage, memory consumption, disk usage, network statistics, etc. A component called Heapster [6] aggregates above data and makes them available via Kubernetes API. Optionally, data can be written to a data store and visualized via a UI. InfluxDB, Grafana and Kube-UI can be used for this purpose [7]. 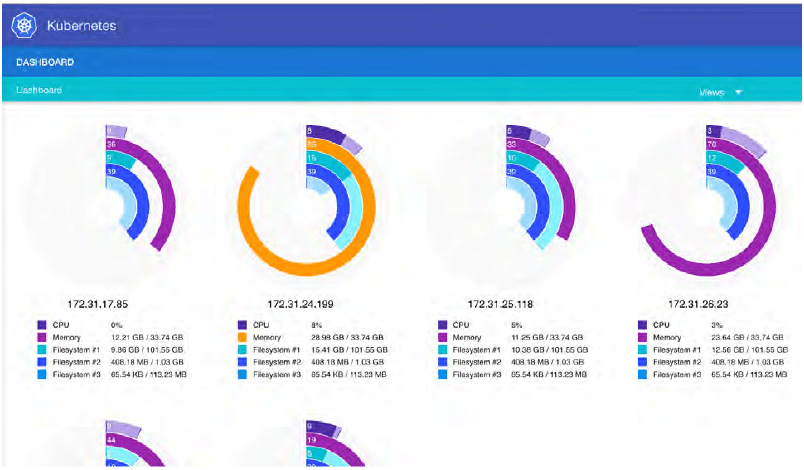 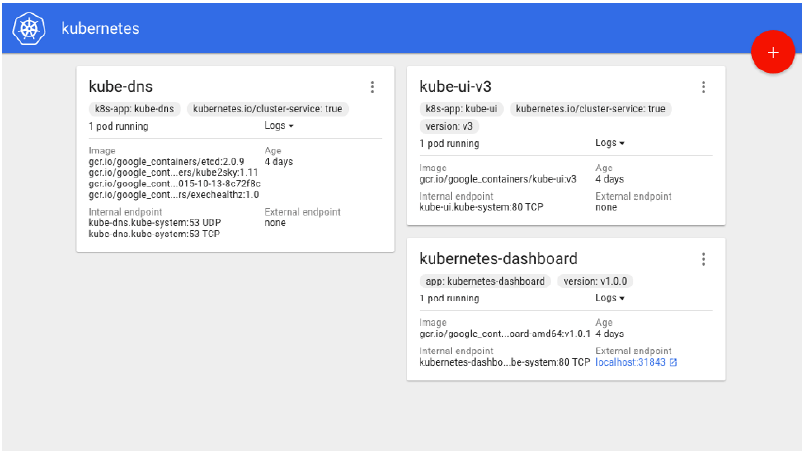 Kubernetes dashboard provides features for deploying and monitoring applications. Any server cluster can be deployed by specifying a Docker image ID and required service ports. Once deployed, server logs can be viewed via the same UI.

The above Git repository provides a set of bash scripts for completely automating the Docker image build process. These scripts have been designed to optimize the container image size. More importantly, it provides an interface for plugging in configuration management systems, such as Puppet, Chef, and Ansible for automating the configuration process. This interface is called the provisioning scheme. WSO2 provides support for two provisioning schemes as described below: 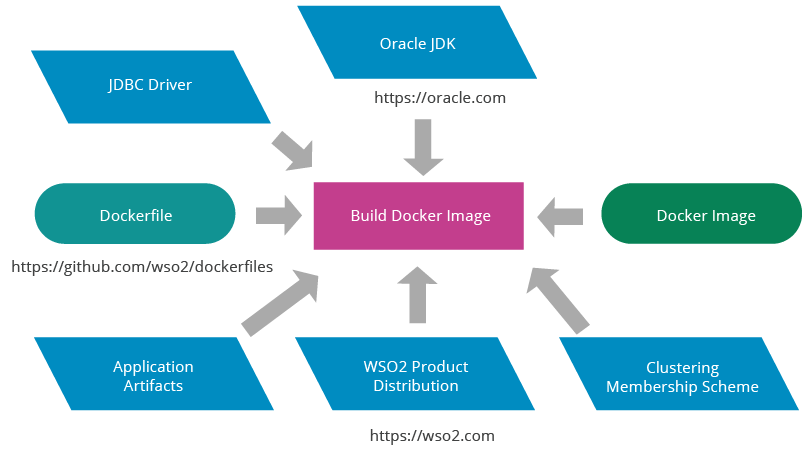 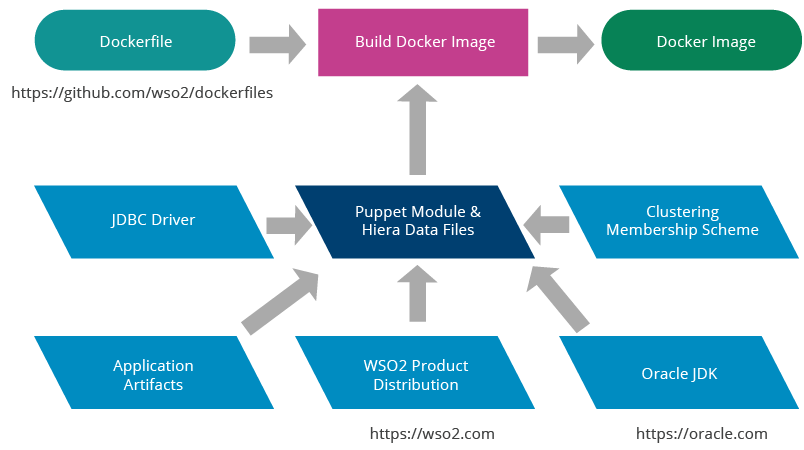 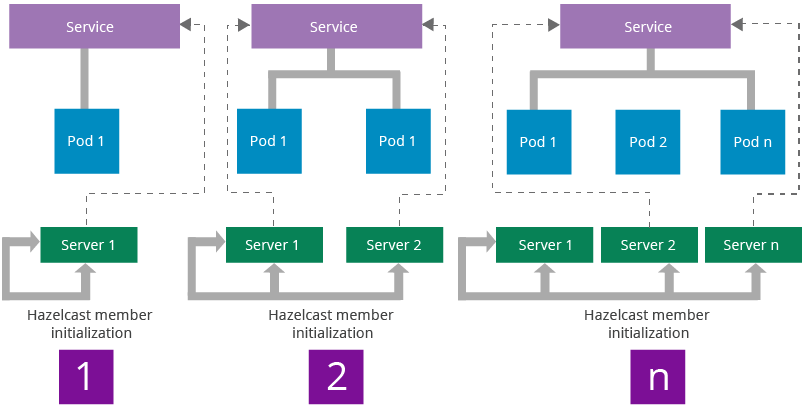 The WSO2 Carbon framework uses Hazelcast for providing clustering capabilities to WSO2 middleware. WSO2 middleware uses clustering for implementing distributed caches, coordinator election, and sending cluster messages. Hazelcast can be configured to let all the members in a cluster be connected to each other. This model lets the cluster to be scaled in any manner without losing cluster connectivity. The Carbon framework handles the cluster initialization using a membership scheme. WSO2 ships a clustering membership scheme Kubernetes to be able to discover the cluster automatically while allowing horizontal scaling.

Multi-tenancy in WSO2 middleware can be handled on Kubernetes using two different methods:

Unlike virtual machines, containers package all artifacts required for hosting an application in its container image. If a new artifact needs to be added to an existing deployment or an existing artifact needs to be changed, a new container image is used instead of updating the existing containers. This concept is known as Immutable Servers [9]. WSO2 uses the same concept for distributing artifacts of WSO2 middleware on Kubernetes using the Rolling Update feature. 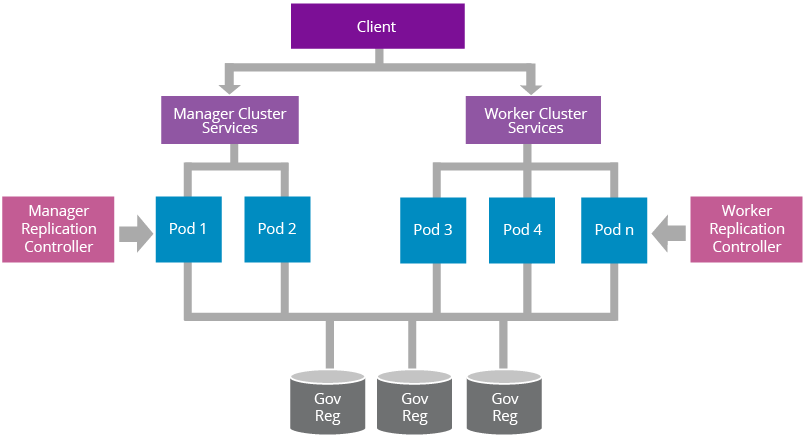 9. A Reference Architecture for Deploying WSO2 API Manager on Kubernetes

WSO2 ships artifacts required for deploying WSO2 middleware on Kubernetes. These include the following:

These artifacts can be found in the following Git repositories:

The Kubernetes project was started by Google with over a decade and half of experience on running containers at scale. It provides a rich set of features for container grouping, container orchestration, health checking, service discovery, load balancing, horizontal autoscaling, secrets & configuration management, storage orchestration, resource usage monitoring, CLI, and dashboard. None of the other container cluster management systems available today provide all of those features. Therefore, Kubernetes is considered the most advanced, feature-rich container cluster management system available today.

WSO2 middleware can be deployed on Kubernetes by utilizing native container cluster management features. WSO2 ships Dockerfiles for building WSO2 Docker images, a Carbon membership scheme for Carbon cluster discovery and Kubernetes artifacts for automating the complete deployment. WSO2 Puppet modules can be used for simplifying the configuration management process of building Docker images. If required, any other configuration management system like Chef, Ansible, or Salt can be plugged into the Docker image build process.