WSO2 API Manager, the leading open-source hybrid API management platform, released the latest version recently; the new iteration comes with a number of powerful new features and product improvements. This article does not examine these new additions, but instead focuses on the architectural enhancements.

We will start by looking at what was there in the pre 3.2 era and then move on to observations on usage, which led to the new architecture. We will then dig deeper into the newer architecture and wrap up by looking at a few deployment pointers, specifically for existing deployments.

WSO2 API Manager was event driven in the first place

WSO2’s API Manager is modular in its architecture with different components addressing the main key capabilities in the product. The following diagram provides an overview. 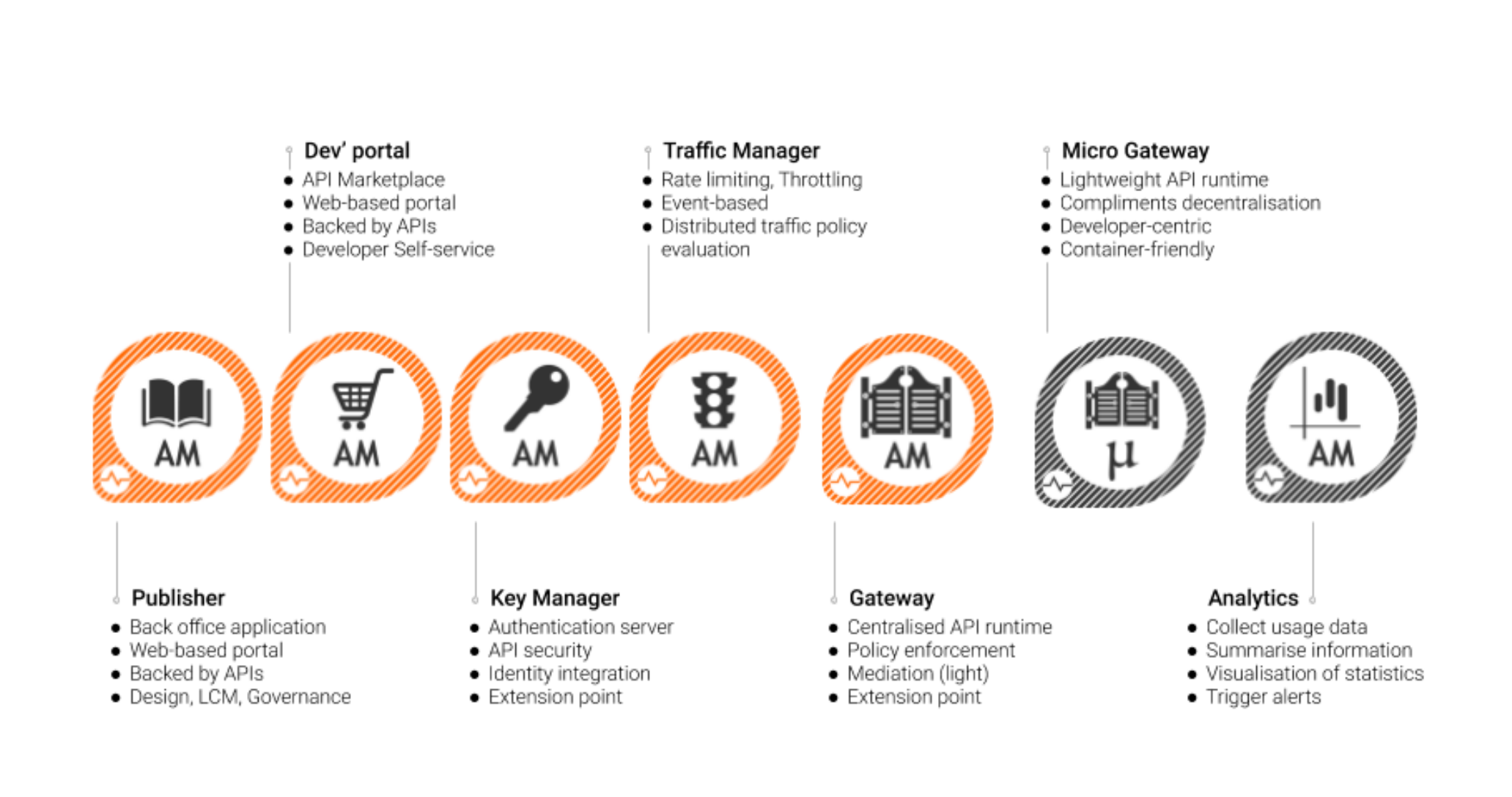 In order to address these issues, Traffic Manager came into the picture. I’ve written in detail about (the then new) Traffic Manager in my blog. To summarize, this is a node that has a real-time event processing engine and a message broker—both necessary components that were needed to fill the missing functions. With the real-time processing engine, it became possible to efficiently process traffic-related events in real-time and also to do much more complex event processing, thus enabling support for complex throttling policies. With events being processed in real-time, there arose a need to convey event results in an efficient manner. This is where a message broker comes in. Events needed to be sent asynchronously without having any impact on gateway latency and the results were needed to be subscribed to many gateway nodes in a deployment. So, the introduction of the Traffic Manager component to the product’s architecture was the first step in making some parts of the underlying architecture event-driven to provide better capabilities.

Traffic Manager was introduced with version 2.0 in June, 2016. Since then, WSO2’s API Manager has been deployed at many customer sites as the main interaction interface for digital transformation in an enterprise. In some cases, the deployment remains small, i.e., limited to two nodes in HA serving traffic. However, in most cases, we see the product deployed across multiple data centres, on various deployment modes (plain HW, VMs, and containers), on-premises, and on the cloud. Over the years, we have observed the following.

A subscription to an API happens at the developer portal, and, once this is done, the details are stored in the database. Similarly, when a token is requested from the token endpoint via the gateway, a record of this token is stored in the database. If the token is an opaque token, the entire token is stored; if the token is a JWT token, then the jti value is stored. In order to perform these validations, the usual way was for the gateway to connect to the key manager and then the key manager would look at the database and decide whether the subscription and token were valid. This caused the gateway to wait for this validation to happen and also rely on another component to do this. A cache was introduced to mitigate this, and the call to the Key Manager was made if there was no cached decision or when the cache invalidated. However, the dependency of the gateway on the key manager still remained. By introducing self contained JWT tokens, the need for validating all tokens were removed, and, with this capability, which came in with API-M 3.0, gateways became more self-sufficient. However, there was still a DB lookup needed to check on the subscription validation and scope validation and this needed to be improved.

Taking the above factors into consideration, new capabilities were added into WSO2 API Manager 3.2. These include:

When bringing in these features to the product, we evaluated the existing architecture and saw that an event driven mechanism was needed to incorporate these changes (e.g., while some components relied on publishing data, others needed to listen in to these events and then adjust accordingly). So, the existing eventing architecture was expanded and Traffic Manager was made the central eventing hub, since it already had the required components.

Let’s take a look at the various activities that became event publishers with these changes and what components came into the picture.

The publisher and the developer portal become the main two components that publish events in this expanded eventing architecture, with traffic manager becoming the intermediary broker and the gateway becoming the recipient of almost all of these events. 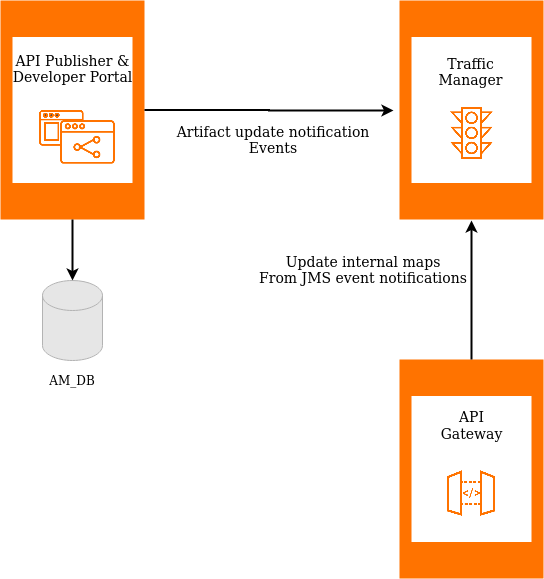 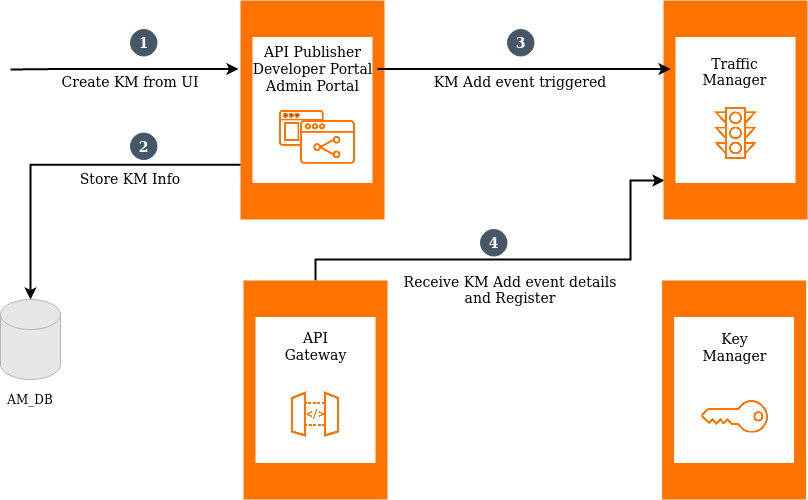 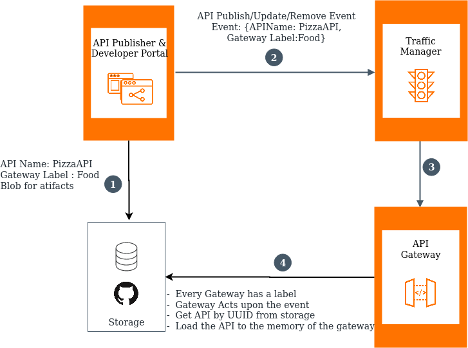 The embedded message broker within the traffic manager receives these events and routes these to the various topics defined.

The multiple gateways deployed subscribe to these topics and whenever a new event comes in, they will receive a notification on that subscription channel. At the gateway, a series of maps, as shown in Figure 5, are maintained in memory to store all this information, so that at runtime, the details in these maps can be used for subscription validation, key manager determination, etc. 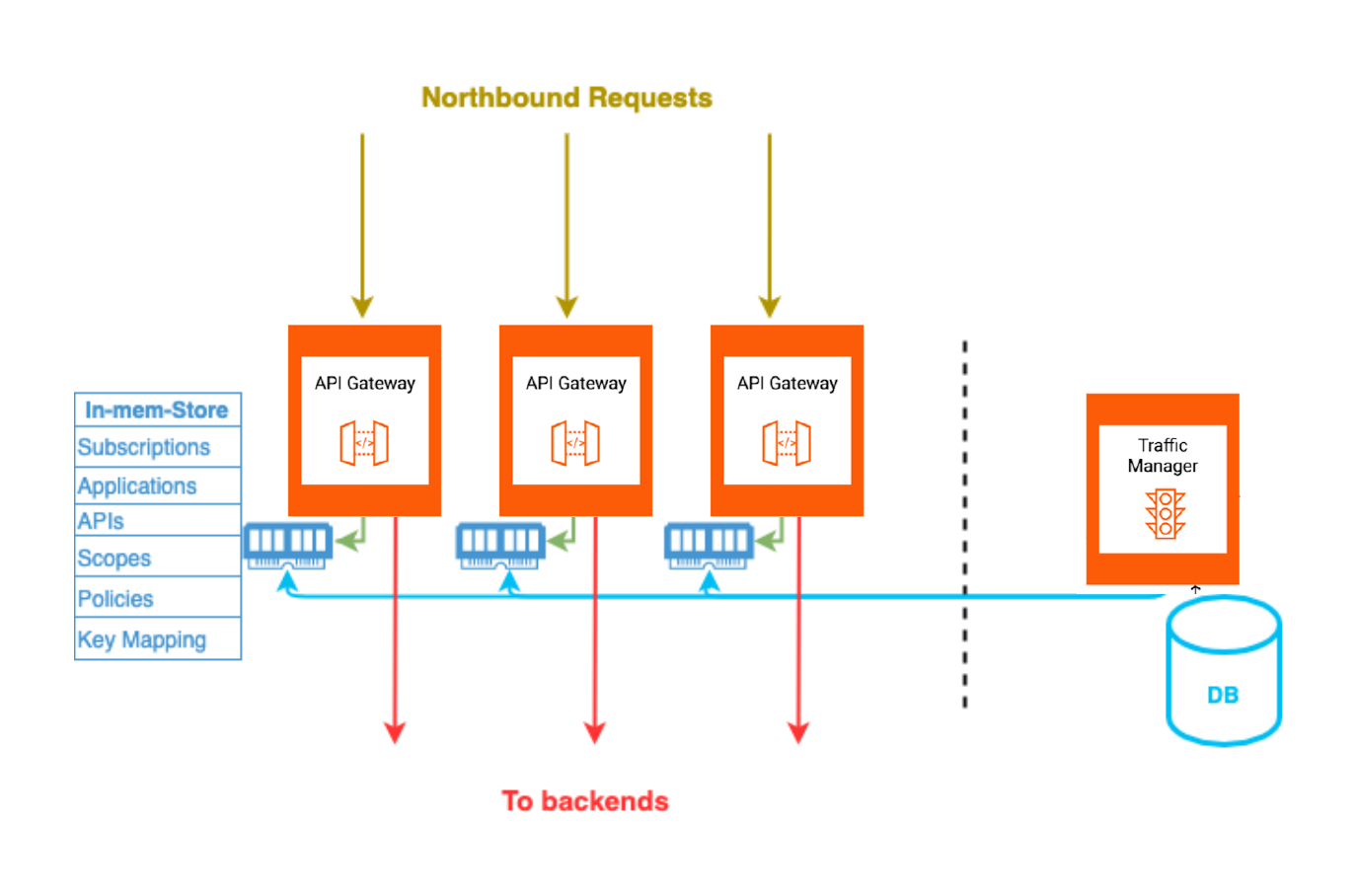 If for some reason a gateway is not up and running at the time an event is published, it will access a REST API at the traffic manager to update itself with all relevant information on startup. This action also happens if the gateway finds a particular map being empty; it will contact the traffic manager via the REST API and update itself. This avoids any errors that may have occurred due to network failures between the traffic manager and the gateway. This mechanism enables new gateways in the deployment to become aware of the current configurations in an efficient and secure manner. This behaviour of the gateway is shown in figure 6 below. 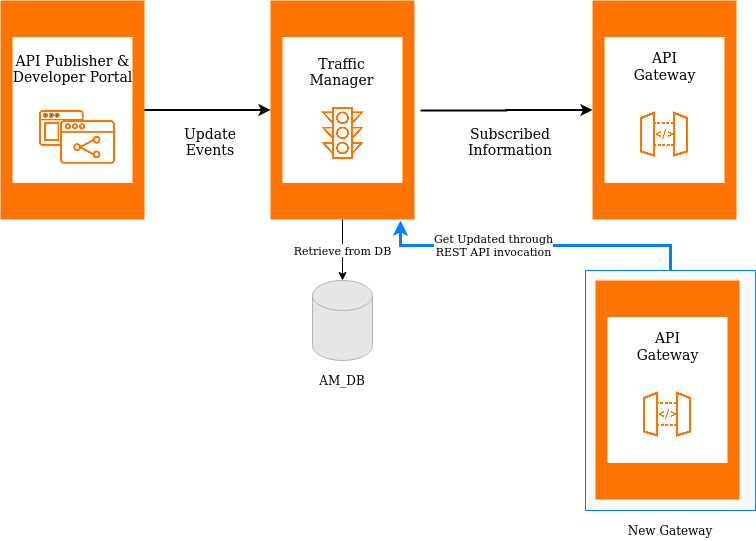 Figure 6: New or offline gateways getting updated when active

If inbuild artifact synchronization is configured, then, as soon as a notification event is received, the gateways will filter out those events that are relevant to them through the labels associated with the events and load the artifacts from the common storage into the gateway’s file system. Steps numbered 3 and 4 in Figure 7 depicts this point. 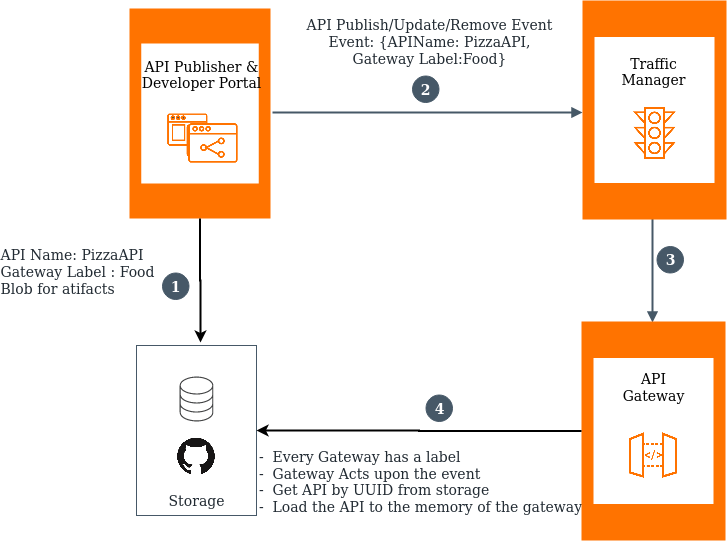 Figure 7: Gateway getting updated when inbuilt artifact synchronization is active

With these changes, the interactions between different components of WSO2 API Manager can be summarized into a single diagram as shown in Figure 8.

Figure 8: Overall interactions between all components

With these changes in the product, there are a few implications that need to be noted.

Try it out today!

To explore all these powerful features, download the latest version of WSO2 API Manager and follow the official product documentation to get started. Moreover, you can find more resources on YouTube and Medium. If you want help from the community, head over to the Slack channel.