Delivering mission-critical messages plays an important role in any device management framework. These messages can carry vital configuration changes and operation instructions. Many of these messages only need to be delivered once. Getting feedback once the message is delivered also plays a significant role as it’s the only way a device management framework knows that the message has reached the device.

This article discusses some of the important concepts in reliable messaging for device management and specific implementation patterns of WSO2 IoT Server with the above-mentioned message delivery services.

What is Device Management?

Devices come in many forms. They vary from computers we use in our day-to-day work, mobile phones, tablets, machinery in factories, appliances used in homes to relatively smaller pieces of hardware that allow bigger machines to be developed. Regardless of the physical appearance or size, device management is a common need for any type of these devices.

Device management is the process of managing the device and its operation/functions. It includes maintenance of a physical and/or virtual device and includes various administrative task and processes to keep devices up to date and adhering to protocols.

Some typical examples of device management include:

In order for devices to comply with rules and regulations, it must receive this information in a reliable manner. This is where reliable and smart messaging (or operation management) comes into play to address this requirement.

What is an Operation?

Device management involves adhering to enterprise policies, security protocols, and upgrading/updating applications/firmware. In order to achieve this, the device must receive the relevant information in a readable format or in its machine language. This relevant information can be sent as a payload to the device in many different ways. Moreover, this information may contain some type of command that instructs the device on how to behave or some type of configuration that makes the device adhere to enterprise policies and security protocols. This could even contain locations of files or system/applications upgrade commands with the required details.

A notable operation management functionality should support the following properties:

Anatomy of the Operation

The Operation consists of two parts:

Conceptually, the operations can be classified into 3 types. The classification is assessed on the syntax of the operations. These are not absolute rules, but can referenced for ease of understanding and implementation. Any type of content must be facilitated as the payload of the operation.

The policy operation is pressed into the service to send a policy to a device. This type of operation is used when the device has to conform with the enterprise’s guidelines and protocols. Its operation identifier will always be “POLICY_BUNDLE” and the payload will include some sort of instructions that need to be enforced on the device. 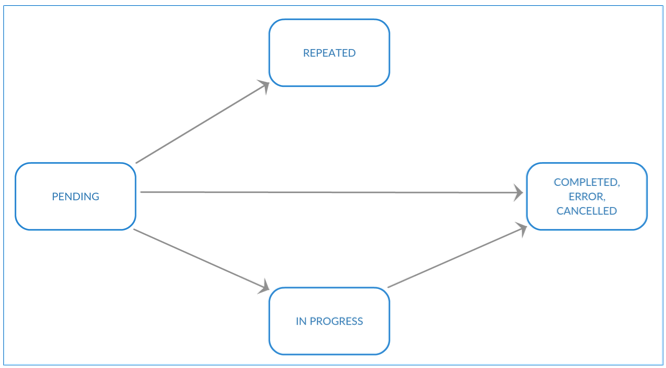 As shown in Figure 1, the operation originates at the “PENDING” state. When the operation is received by the device and executed successfully, it will be “COMPLETED.” After obtaining the operation by the device, If the execution is unsuccessful, it will be marked as “ERROR”. The “CANCELLED” status is not yet available in the WSO2 IoT Server but will be added soon. This state is beneficial because when the device is removed forcefully from the system or becomes inactive due to a some type of failure (network failure, device broke down, etc.), all “PENDING” operations for that device will be pronounced “CANCELLED”.

How Operations are Added

Basically, the operations are added through the APIs exposed. As each device types has different types of operations, the most common device types must be given concrete implementations, e.g. Android has its own APIs and iOS has the same.

When an operation is added either from a UI or a respective API, it will create an entry in the database. This entry is platform independent, therefore generally stored as a JSON string.

How Does a Device Receive an Operation?

As explained above, when the operation is added, it is saved in the database of the server for reliability, and this operation should be transported to the devices using a reliable and smart technique.

The following are three mechanisms on how a device could receive operations in a reliable manner as explained above: 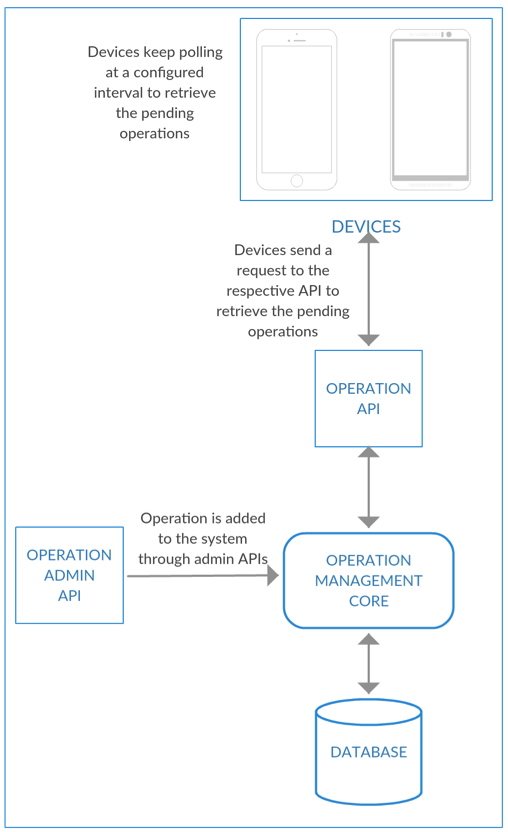 As shown in Figure 2, the device is polling the server at a configured interval. When an operation is added to the system, it will be on the pending state. And when the device polls, it sends a request to retrieve the pending operations from the system. This request is a reverse HTTP call. This means that the request consists of a payload related to the previous operation’s executions. In other words, responses of the previously retrieved operations are taken with the next request to obtain the pending operations. 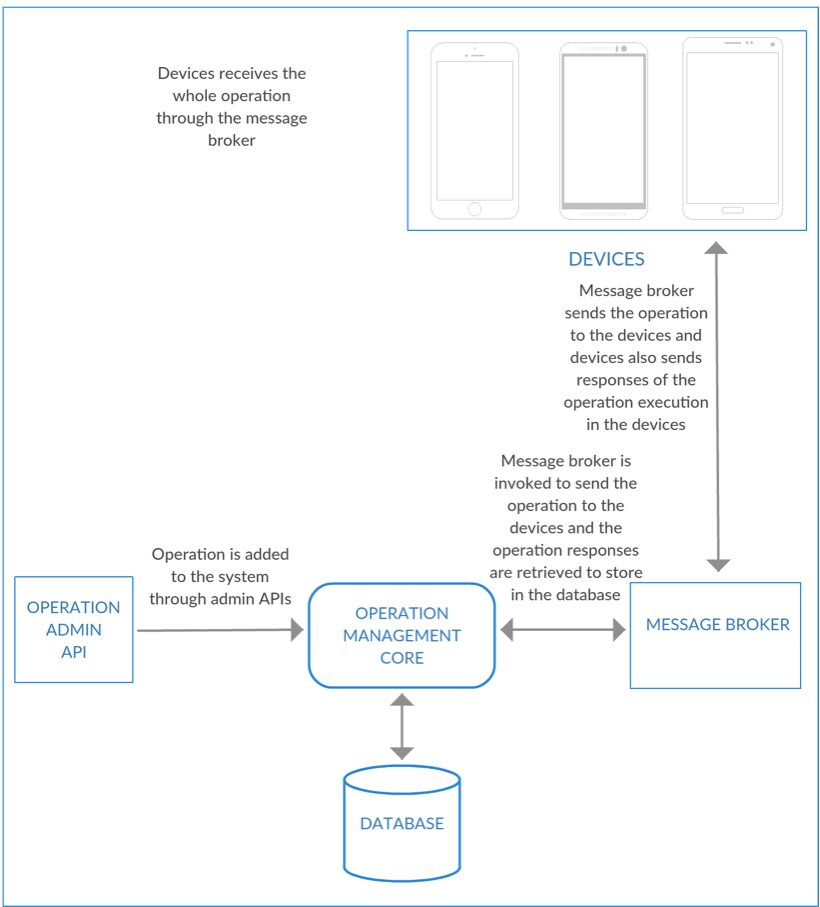 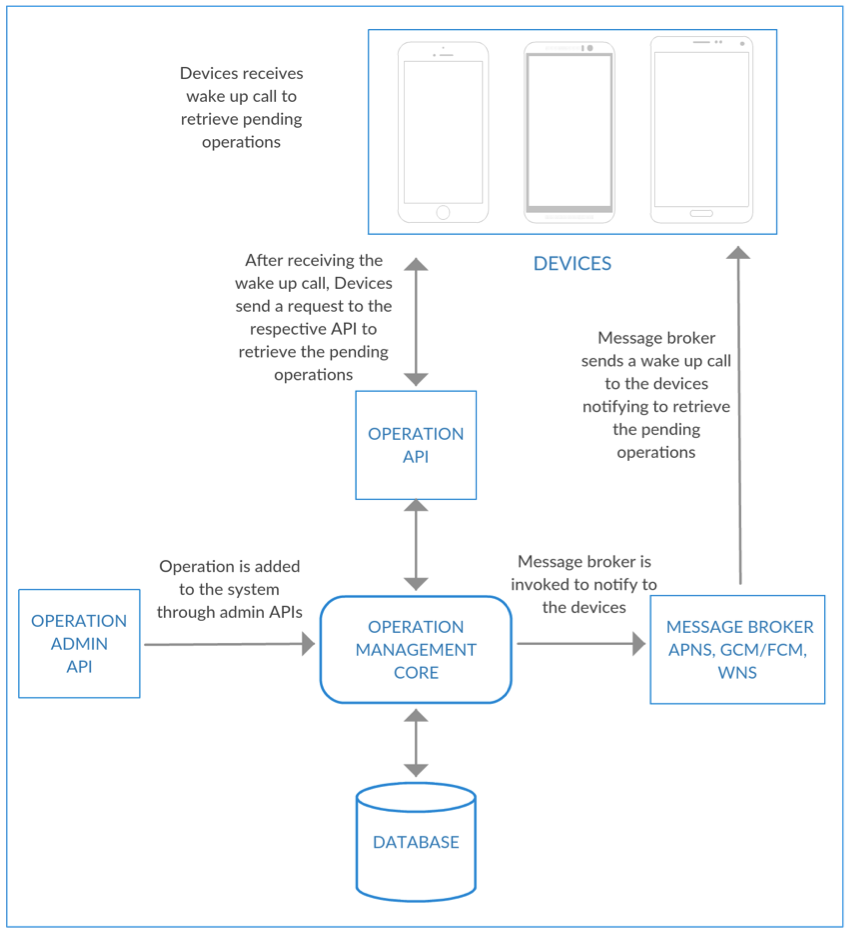 Therefore, When an operation is added to the IoT server, the message broker is invoked to notify the device about a pending operation. This is a wake-up call to the device, and as soon as it received, the device starts sending a request to receive the pending operations. This request from the device is also a reverse HTTP call as it sends the responses of the previous operations in the same call.

As the device complete the operation it may generate a response. Therefore, when the device requests the next pending operation, it sends the response of the previous operation with the payload. For instance, if the executed operation is the DEVICE_INFO, which device is obligated to send the information of the device, both real-time and static with the response.

Responses for the operations are the most prominent part of realizing the system state as they provide vital information about the device’s location, status, firmware/application status, among others. WSO2 IoT Server provides these capabilities to analyze the information in both real time and batch mode. This helps to summarize data to produce conclusions on the information they contain. Moreover, it reacts in milliseconds to compromising situations via real-time analytics.

In Android, we have implemented a custom agent that handles device enrollment and communications. This agent is responsible for executing operations in the devices, monitoring, updating firmware, and applications.

The polling mechanism is mostly used with Android mobile devices with WSO2 IoT Server. The Android agent is configured by default to approach WSO2 IoT Server every minute. The server URL and other related configurations are provided at the time of enrollment of the device.

The Android device keeps polling at a secured REST endpoint to obtain the pending operations. At every request, the device sends the results of the last operation executions. Therefore, this request is a reverse HTTP call.

As the default setting in the Android agent is configured for polling, it can be changed to the wake-up mechanism at the enrollment time. With this configuration, the server to device communication happens through a broker. 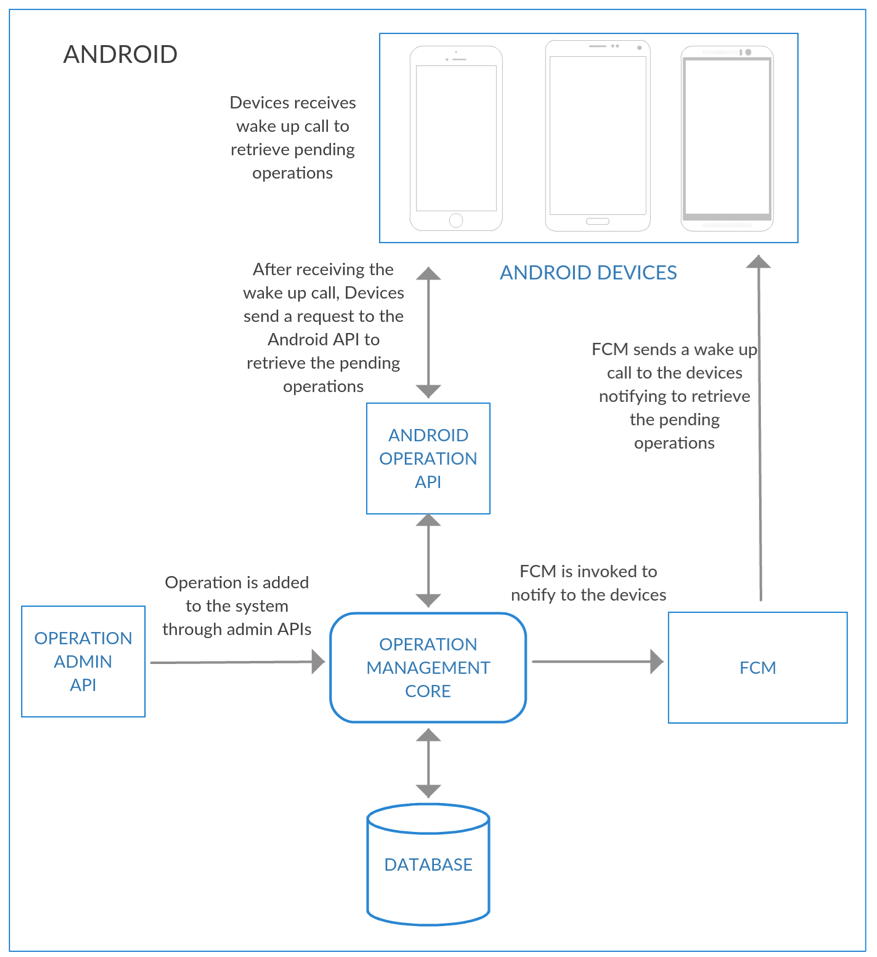 When an operation is added against the Android device, it’s recorded in the database. Simultaneously, a notification is sent to the fire-based cloud messaging (FCM) server to alert the devices, and then the devices will call a predefined, secured REST endpoint to retrieve the pending operations. This is also a reverse HTTP call that takes the payload related to the previous operation’s execution results. 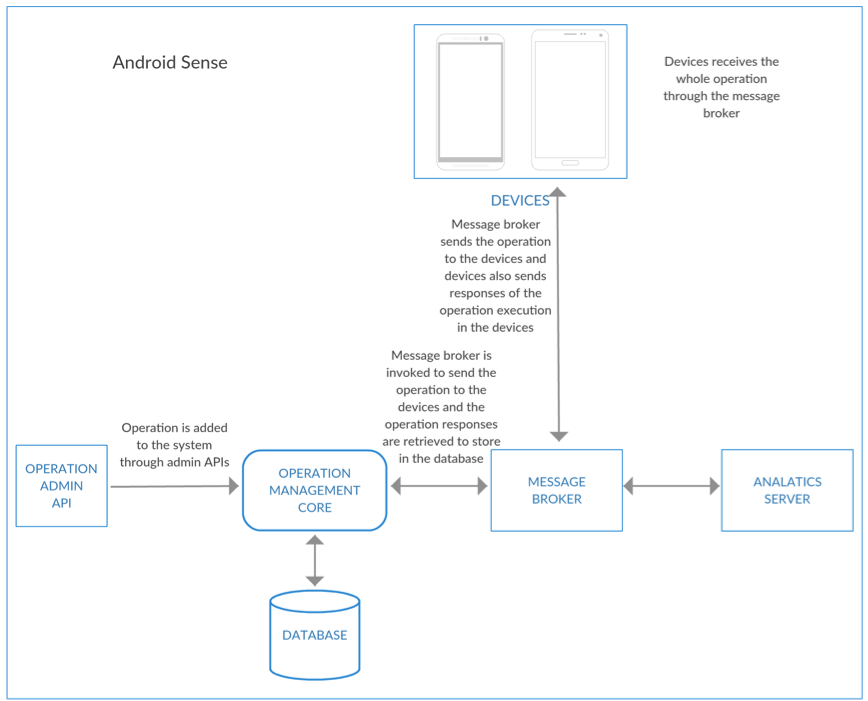 However, because this device is empowered to sense and assemble data from its sensors, all the events generated will also be sent to an analytics server through the message broker. The analytics server can process, summarize, and analyze data in real time and batch mode; therefore, all of these events are sent through the smart analytics process to make the patterns for decision making, fraud detection, and anomaly detection as well as report generation.

WSO2 IoT Server supports iOS device management with a wake-up mechanism. As shown in Figure 7, when an operation was added through the admin APIs, it is stashed in the database. Simultaneously, it sends a wake-up message to the Apple Push Notification Server, which in turn delivers to the iOS devices. As soon as the device receives the wake-up notification, it establishes a connection to the IoT server to retrieve the pending operations. 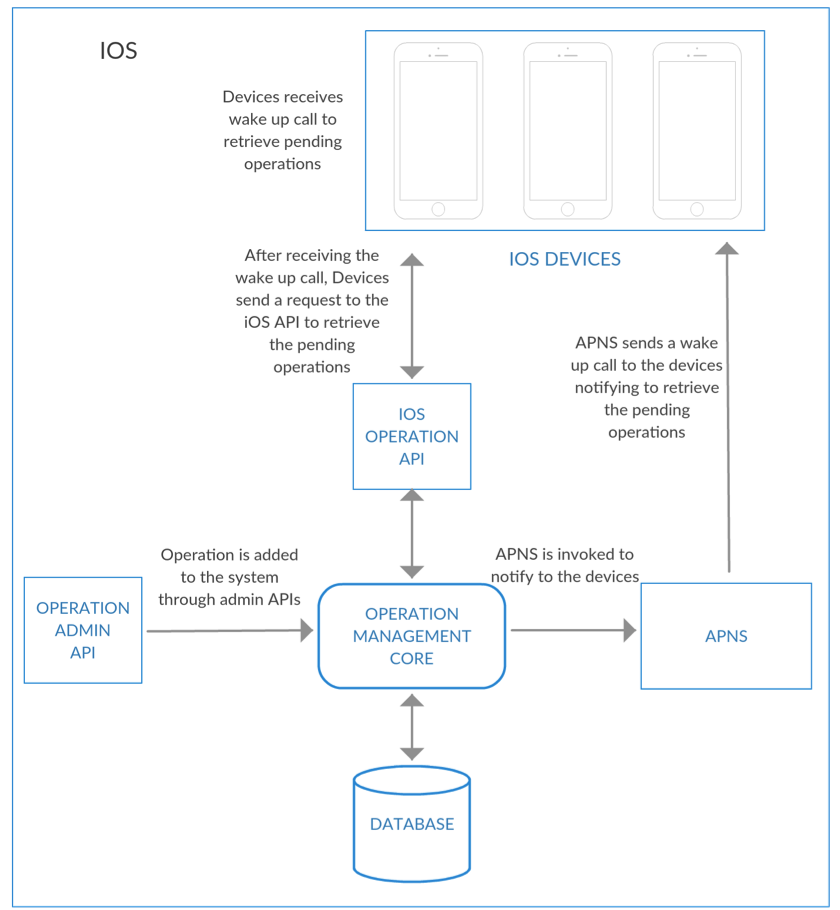 The iOS devices have a built-in agent for most of the operations that are integrated in the operation system with its design. This built-in agent works differently than the Android agent, which we have built on top of the Android system. As the Android agent can retrieve all the operations in a single call, the iOS agent behaves differently. It takes a single call for every pending operation stack against the device. If there are 10 pending operations, it takes about 11 requests to complete the entire process. Here, the first 10 requests are for retrieving all operations one by one. When there are no operations available, it requires a 400 response code to stop the request flow from the device. That is how iOS agent is designed by Apple, hence the 11th request will receive a 400 response code from WSO2 IoT Server. 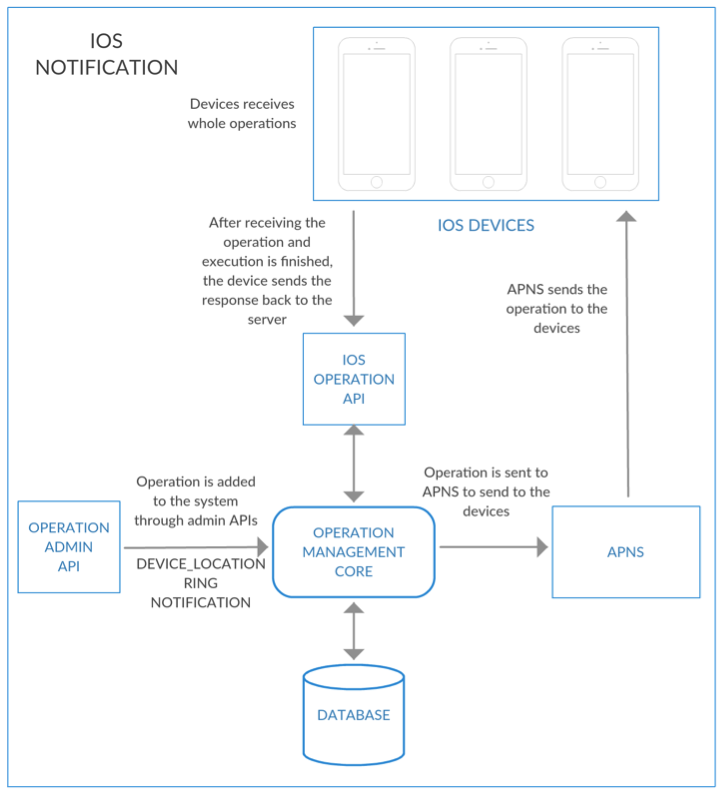 WSO2 IoT Server supports windows device management as its core functionality and is somewhat similar to how iOS devices are managed. The Windows devices come with a built-in software agent that governs the complete management capabilities. This agent is a OMA DM (Open Mobile Alliance) (Device Management) client that supports the SyncML (Synchronization Markup Language) as the communication protocol between devices and the server. Unlike the iOS, Windows devices do not have a custom-built WSO2 agent at the moment.

The Windows devices are supported with both polling and a wake-up mechanism.

Polling of Windows is the same as the Android polling mechanism. When an operation is added, a record of that goes to the database. At the enrollment of the device, it receives a configuration that governs the polling interval. Therefore, the device starts polling at the configured time interval and receives the above operation. The next polling request will include the execution results of this operation regardless of it being successful or throwing an error.

Windows also supports a wake-up notification mechanism that sends a message to the device to retrieve the pending operations. 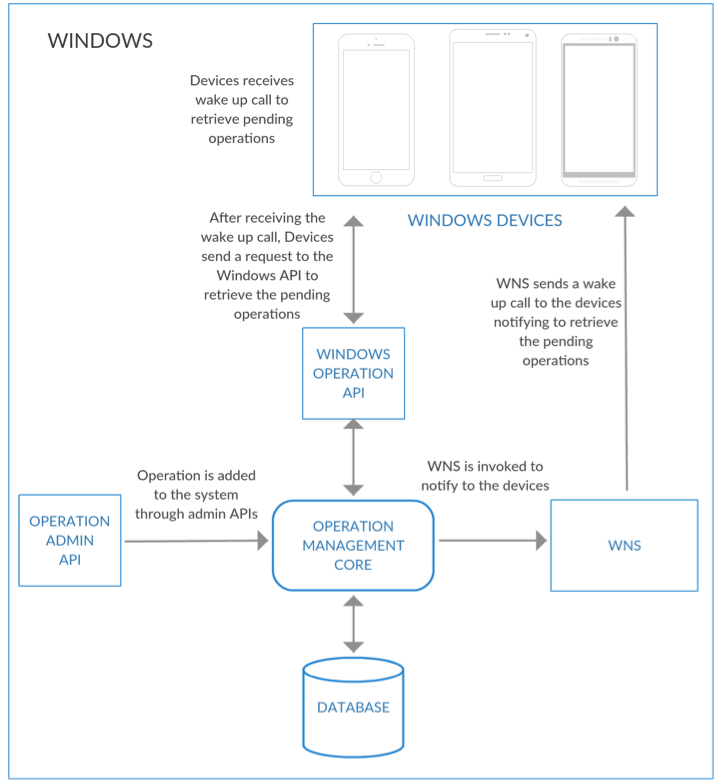 As shown in Figure 9, a user adds an operation through the admin APIs and it is recorded in the database against the device. Simultaneously, the WNS notification adaptor is initiated to send a wake-up call to the device. When WNS (Windows Notification Service) receives the messages, it relays to the device. As soon as the device receives the wake-up call, it starts calling the pre-configured endpoint to retrieve pending operations and every request takes the results of the previously executed operations in its payload.

WSO2 IoT platform is a comprehensive open source offering that covers device management with a smart and reliable messaging implementation; it enables the managing of devices and applications with enterprise grade capabilities. WSO2 IoT Server has integrated with well-known message delivery frameworks, such as APNS, FCM, WNS and MQTT, with fail-safe mechanisms in place and in a highly secure manner. It also has many extension points to plugin any new delivery protocols and implementation without any hassle.