WSO2 IoT Server is a comprehensive open source IoT solution that enables enterprises to manage their mobile and Internet of Things (IoT) devices. All its capabilities are exposed through industry standard Swagger annotated REST APIs. It allows device manufacturers to create their own device types and enroll and manage them securely. It is designed in a way to protect both devices as well as its data. It also provides analytics capabilities to gather sensor data, visualize them real time, identify patterns and convert these to responsive action. You can also extend its capabilities to securely manage mobile devices. Figure 1 below illustrates WSO2’s IoT architecture. 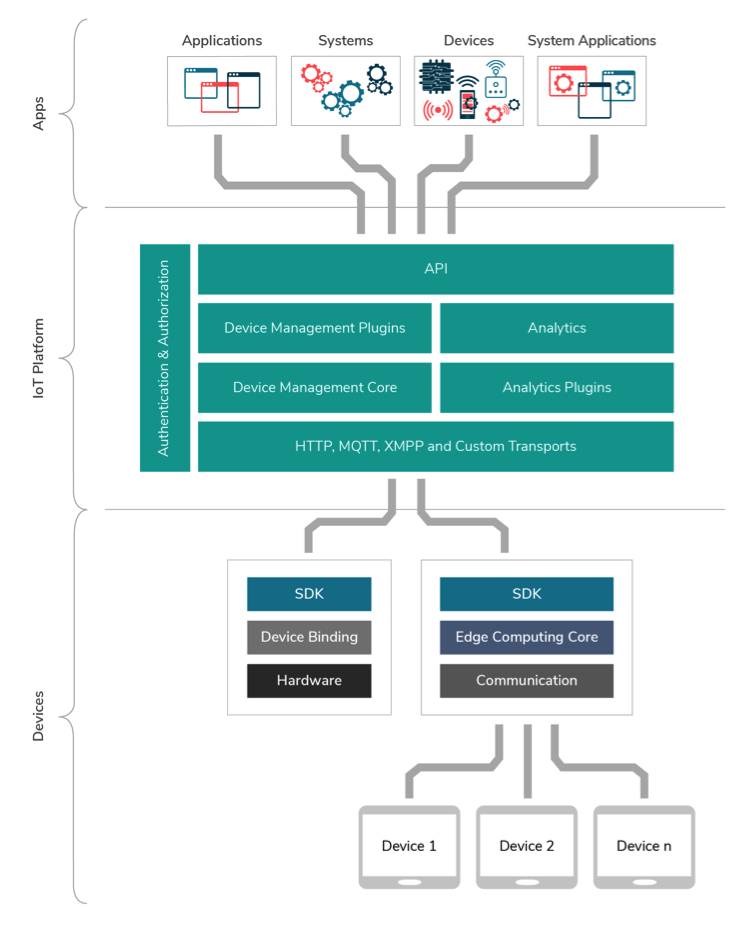 Figure 2 below shows an in-depth architecture of WSO2’s IoT offerings. The key difference between the two architecture diagrams is that both Apps and Devices are represented in the ‘Interaction’ layer. 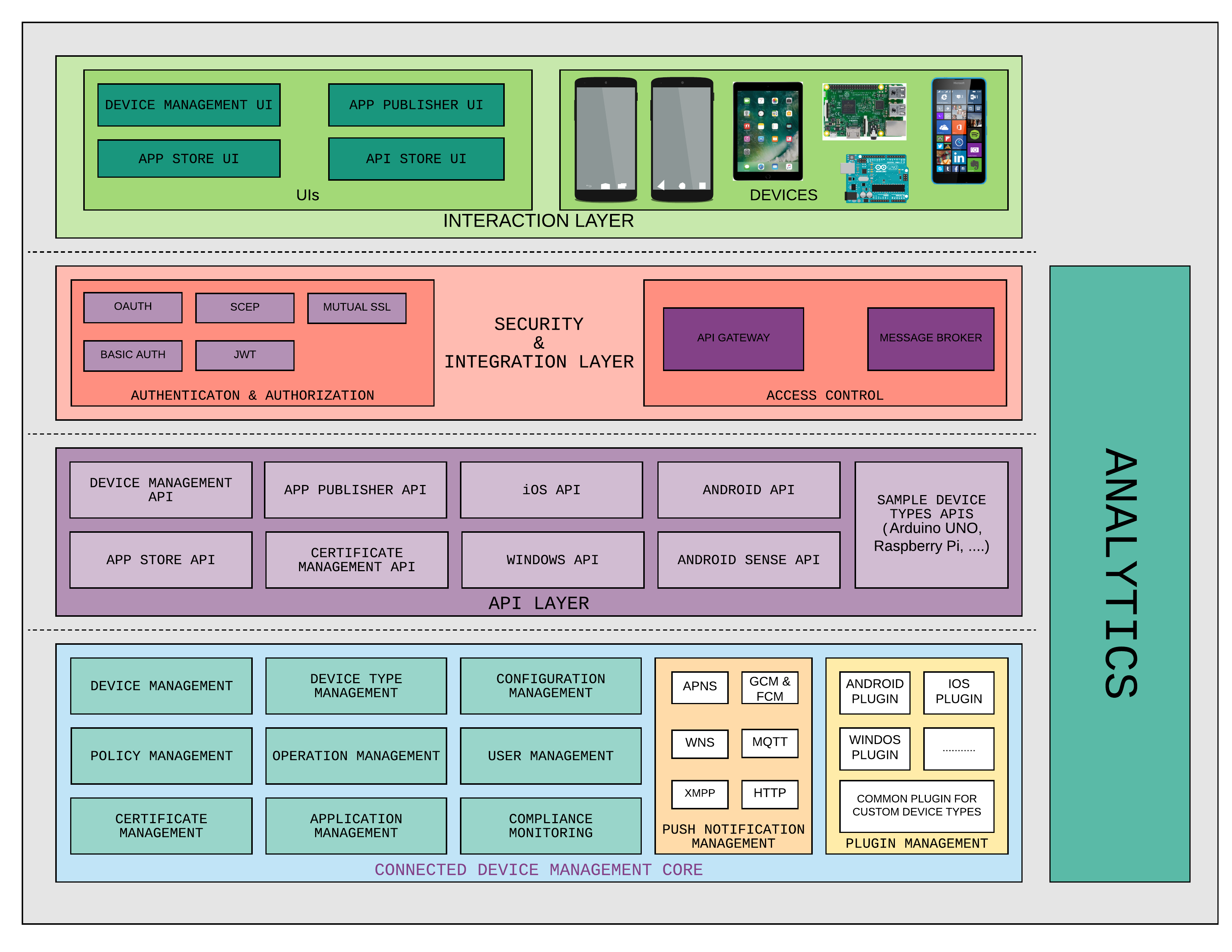 As indicated in Figure 2, the overall architecture can be broken into the following 4 layers. We take a closer look at each of these layers below.

This is the core of the IoT server. It manages and controls all the functionality WSO2 IoT offers. This acts as the brain of the WSO2 IoT platform. It is designed with many extensions points, hence most of its functionalities can be extended and customized. However, the CDM core has evolved into a much more capable and mature platform and any device type can be easily integrated.

As shown in Figure 3 the CDM core consists of the following components:

The device type management component has the capability to add/remove new device types and was added in the WSO2 IoT Server 3.1.0 release. This enables you to describe device features, and generate device operations and device details.

Policies ensure the devices that belong to a user comply with the corporate rules and regulations. A policy will maximize control of the devices and reduce the risk on corporate data. If a device does not comply with a given policy, the server will be notified of any corrective action, such as re-enforcing the same policy. The policy may include restrictions, such as camera disablement, and configurations, such as VPN or Wi-Fi.

WSO2 IoT Server controls devices via operations. Any message, configuration, restriction, policy or command is sent to a device as an operation. These operations are either pushed to devices through notification mechanisms or the devices are polled at a configured time. Once the device executes the respective operation the result is also sent to the server and is stored in the database.

Application management is a major part of mobile device management (MDM). WSO2 IoT provides ways and means to add applications and upload apk/ipa files through the app publisher console. Moreover, users who have enrolled their devices with WSO2 IoT Server can install applications from the app store. The app publisher and store have capabilities to add public apps from the Google Store or the Apple App Store. You can Install the web clips on the devices connected to WSO2 IoT Server. In addition, enterprise enrollment where an administrator installs an application on multiple devices can also be done via the app store.

Configuration management is used to add pre-requisites and licensing agreements that are required to start enrolling a device. Before enrolling iOS devices, you need to configure the prerequisites, such as plist file and APNS certificates. You need to add the licence agreement that the users need to accept before completing the iOS device enrollment process.

The certificate managementcomponent has the implementation of the Simple Certificate Enrollment Protocol (SCEP) protocol, which supports device enrollments via mutual SSL configurations. With SCEP, you need to provide an SSL certificate for device authentication and authorization to happen. During the enrollment process, the device generates a certificate and shares it with the server as a Certificate Signing Request (CSR).

User management comes bundled with WSO2 IoT and facilitates the management and control of user accounts and roles at different levels.

WSO2 IoT’s user store is configured to operate in any of the following modes:

The use of WSO2 IoT has the following features:

Push Notification with the Message (Operation)

Push Notification with the Wake-up Call

WSO2 IoT Server is designed as a pluggable architecture. When introducing new device types this pluggable architecture is useful. It’s not mandatory to add a plugin though when the user needs to add a custom device type if the device is simple. Most IoT devices are supported without any external plugins being introduced to the IoT server. But if you have a device that requires more complex operations, writing a JAVA plugin might be the most suitable approach.

There are 3 ways new device types can be introduced to WSO2 IoT Server:

This is the core level at which device management functions and where most of the device communications protocols are exposed as REST APIs in WSO2 IoT Server. All these APIs are equipped with industry standard Swagger annotations, hence stub or client generation can be done easily. Device type related APIs are used because each device type communicates and controls in different ways. For example, Android uses a different message format to control the device compared with what iOS uses. iOS has its own protocol to communicate with the device and its own message formats that can be understood by the iOS device. The WSO2 IoT Server operation core is implemented in a way that it does not need to know what type of message is being sent to the device, the format of the message, and the delivery mechanism. This explains the device type related APIs that can translate and interpret the operation in a way that devices can understand. WSO2 IoT Server provides simple device message protocols, such as JSON, XML, DM SyncML (also known as Open Mobile Alliance Device Management or OMA DM XML) and profile protocol for iOS device management.

IoT Security and integration play a very critical role in any IoT solution. WSO2 IoT Server is designed to give security the highest priority. When WSO2 IoT Server is used in an enterprise it stores user data, device data. Devices store very confidential information about the business, hence protecting and securing IoT server access controls and associated devices is a key requirement. Furthermore, integrating the IoT server with other applications and user interfaces, and exposing its capabilities to the outside world securely is crucial. Therefore, integration also plays a key role when implementing the IoT server.

Integration happens via two components. The first one is the API gateway and the second is the message broker. The API gateway handles HTTP requests and responses the same way the message broker handles MQTT messages between the devices and server. Given that the IoT server supports plug-ins, you can plug an XMPP server or a COAP server to communicate with the devices via new access controls if required.

As all of the admin services are implemented as REST APIs, they are securely exposed for integration through the API gateway. WSO2 IoT Server also exposes the API store functionality as REST APIs. A user can find all the available APIs by just calling the API store endpoints.

This layer can be broken into two segments depending on their interaction with the server. As depicted in Figure 6, both of these segments are represented in the same layer. However, as they interact with the server differently, it is better to identify them individually.

As WSO2 IoT Server exposes all its functionalities, integration with external systems and applications are pretty straightforward. Securely exposed APIs can be accessed from any device, hence system applications can be extended as well. Not only are the APIs secured, it also provides different authentication mechanisms, such as SSO, SAML, and XACML when connected with WSO2 Identity Server. WSO2 IoT Server consists of four main UI consoles:

Analytics is a crucial part of device management. WSO2’s IoT platform goes over and beyond to provide both real-time and batch analytics. Machine learning is also a prominent capability in WSO2 IoT Server. The WSO2 IoT platform offers smart analytics that can detect anomalies and trigger immediate actions. It offers streaming analytics capabilities, complex event processing, and machine learning to help you understand events, map their impacts, identify patterns, and react within milliseconds in real-time.

WSO2 IoT Server supports batch analysis of the collected data to show an aggregated and summarized view. The summarized data is also stored in the RDBMS database, hence it can be consumed by other applications to support the company’s ecosystem.

You can run the event processing capability on the device itself, communicate with WSO2 IoT Server and manage the edge computing functionality required for your IoT applications. The complex event processing library “Siddhi” can be packed with any device agent to greatly enhance the capabilities of your solution and give you the ability to run your real-time or batch queries on the edge device.

The device to server message flow is shown in Figure 7. WSO2 IoT Server sends messages to the broker and APNS, FCM, GCM, and WNS work as virtual brokers. MQTT and XMPP are actual brokers that exchange messages between the IoT server and devices. APNS, FCM, GCM, and WNS are used to notify and wake-up the devices due to constraints of message sizes. Actual payloads are not sent to the devices through them. Once the wake-up call is received by the devices, it calls the IoT server to retrieve the actual payload. The API gateway is a part of the WSO2 IoT platform.

External/System applications connect to the IoT server via the API gateway. Note that the API Gateway is a part of the WSO2 IoT platform. 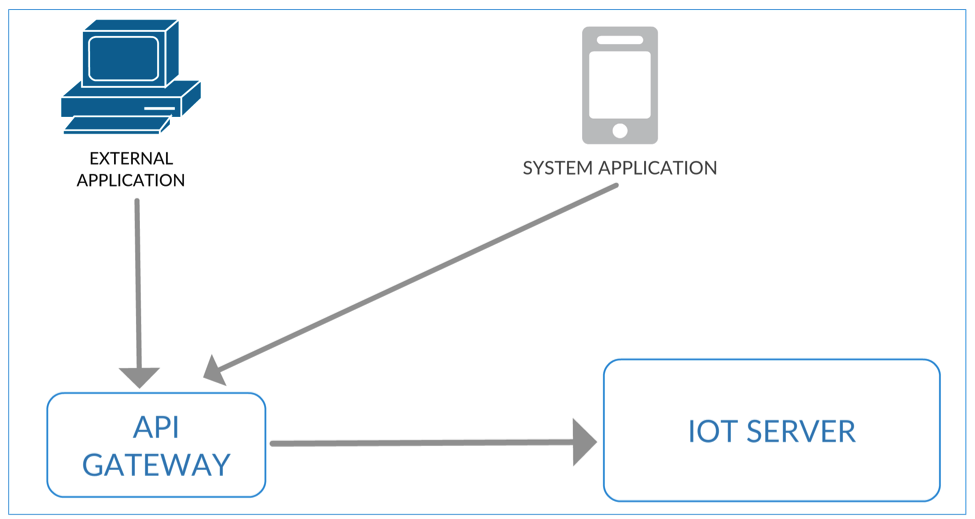 WSO2 IoT offers benefits to both users who need better mobile device management capabilities as well as OEM vendors who develop new devices. As it’s free and open source, the complete set of capabilities can be downloaded instantly and deployed on a server with just a few clicks. Among its key advantages are its fully integrated IoT security, industry standard Swagger annotated REST APIs, and real-time, batch, and edge analytics that differentiate the platform from any other IoT offering. In essence, WSO2 IoT Server is a complete platform that covers everything in the IoT landscape.