In my previous blog, Simplicity isn’t Weakness, I highlighted the fact that we can even use a static diagram in order to play some sort of a virtual animation in someone else’s mind to communicate a message effectively. This obviously requires a greater level of understanding of the idea that you are supposed to communicate with a similar level of understanding about your audience. With all that however, you may not have all the time in the world for the transfer of information from your head to another. But it is wonderful how a little sense of understanding typical cognitive behaviors of people can help us in overcoming this hurdle. This blog is mostly a review of something that many people are already familiar with. But after reading this, the moment you come across that, you will start to notice many new things from a whole different perspective.

London obviously is one of the most beautiful and fun cities in the world. But when you happen to become a part of the London while rushing by on a tight schedule, London has its own miraculous ways of changing its form into a busy and crowded city within milliseconds! Even on a sunny day, a stranger could lose his way in a crowded and complicated city like London. Now, think about the scenario in which the strangers happen to travel in the underground railway as known as the “tube” which literally is a mesh of interconnected railway stations and lines. Once someone gets in the tube, the process of getting out at the intended destination would have been similar to running in a maze for that person, being a complete stranger each and every turn.

The “Eddie Morra” in Them

I have taken the London Underground as my example. But I am sure that you would observe the same or similar concepts if you take the underground (or light rail) railway network in your own city for that matter. Now think about the last time you traveled via an underground railway, dealing with the stress of crowds, time, and the abuses of queues that would put on you having a very little time to have a glimpse of the railway map which is the only guide that is useful.

Have you ever given a thought of why an average passenger doesn’t always have to run towards a railway employee asking for help or further explanation of what is depicted in the underground railway map? Even if no one has offered you a pill of Eddie Morra’s NZT, someone has done a pretty good job of understanding how to implant some important details in your mind utilizing those few seconds you spend on having a glimpse at that railway map.

The Perception that Matters

First of all, the underground railway map isn’t anything like those maps we see in general. Rather, it bears more resemblance to an electronic circuit diagram. This is evidence from the fact that the designers have given priority to the purpose that these diagrams were supposed to serve over any other factors such as the accuracy of locations of the railway stations and actual distances between and among them. They also have thought about the typical user’s behavioral and thinking patterns in order to align the experience accordingly by prompting a carefully chosen scope of essential information with appropriate weights. Therefore, it is fair to consider these as diagrams even if we call them maps in day-to-day life.

Once someone gets into a carriage of the tube, two types of diagrams can be seen on conveniently observable locations. The above-given example is a part of one of those diagrams that belong to a railway line called the Northern Line. Out of these two diagrams, this one looks a little prominent based on two things. The first is where it has been placed, which is in the eye level of standing passengers. Even for the sitting passengers, this is conveniently observable as it has been pasted on a tilted surface that is perpendicular to the direction that they look at the diagram. The second reason is the simplicity of this diagram which is a result of carefully choosing the essential information.

Think about a scenario you choose any form of public transport to reach some destination. What is the very first thing related to that journey that puts at least a little amount of stress on your mind? In 90% of the cases, that would be the stop that you must get off at. Sometimes, you would prefer to know what is the stop before your get-off destination so you could prepare yourself in advance. Your thinking process typically starts with the route that you are currently on and then you will look for the name of the place that you intend to get off. The moment you look at this diagram, that is exactly what you see. Of course, there are many secondary details depicted using different notations and colors - but they don’t matter at first. Most importantly, these secondary details do not disturb you by being in the middle taking lots of attention or overcomplicating things.

If you don’t see your intended destination at once on this map, you will have another careful look along the lines - in which case you come to the realization that there are two types of nodes on the lines of the map that have been used to demarcate each station. The first type consists of just a segment of a perpendicular line (i.e. Angel and Old Street stations above). The second type has been clearly demarcated with a circle, similar to those welding points of a printed circuit board (i.e. Moorgate and Bank stations above). When you compare these two in your mind with the details you gather from the obvious observations, you notice that the names of other railway lines listed under those circular nodes with their respective color codes. This information is processed in your subconsciousness making you ignore the rest of railway stations (demarcated with a segment of a line) if you are someone who is looking for a transfer.

Where is My Cutlery?

There is another important thing that I have noticed and that is the designers of this diagram have been careful enough not to make a common mistake that many others make. They could have numbered these stations (or used abbreviations, initials, or letters to mark the station) to reduce clutter and provide a map-key to match the name of each station with the relevant number (or acronyms, initials, and letters). Just imagine what would have happened to our experience as users if they had done that to make the diagram look more clear, simple, and clutter-free? That would not easily align with the sequence that I grasp things in my mind. In other words, it may look simple and pretty by the outer appearance - but it isn’t actually the simplicity that the map-reader’s mind would wish to experience. That would be no different from having a delicious meal on the table in front of you while your waiter has forgotten to bring cutlery.

Using acronyms, initials, or numbers with a map-key can disturb the reader’s flow of realization by creating information gaps time-to-time, forcing them to jump out of the track for a while and come back as a stranger to the context that he/she was familiar with a while ago. Suppose you have to tell a bedtime story to a child. They wouldn’t even care for imaginary things in the story as long as you don’t leave gaps in the story that break the story at the middle and make them question back.

Offload Some Weight When it Makes Sense

However, there are some details for which they have used a map-key area such as the definition of dotted lines that indicate the railway tracks which are only being operated during the peak hours. The significance or importance of such details is less compared to the previously mentioned one because the passengers who reach that point are anyway instructed to leave the train and take an alternative route as the current train terminates at some point before that. But having this sort of information also is helpful to a person who wishes to understand things in advance and be prepared for it. Therefore, such information is have been included in the diagram without disturbing the alpha elements in their design.

For the people who wonder which railway line they should take next to reach their end destination, there is a full underground map displayed below the above-mentioned diagram in trains. This secondary diagram depicts all the railway lines and the stations that they connect to. 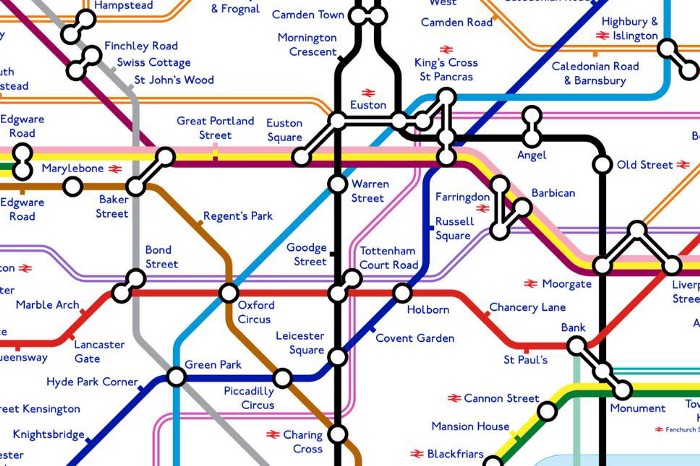 This map is there to help a typical tube-passenger when he/she reaches the next stage of their thinking process which is what they are supposed to do once they get off. With this approach, the passengers are being entertained to read the information related to the next stage only if or when they need to. Even if they take their eyes away from the first diagram by this time, the color codes of the respective railway lines help to maintain a virtual connection between these two diagrams. This constructs the story in the passenger’s mind with a notion of movement, even if the media used in this isn’t an animation on an electronic screen.

Something that we could learn from this last part is how to break the story down into a few related diagrams for the purpose of keeping them clutter-free and to avoid information overload. If you use that technique, it is also important to maintain a similar theme and design element on all diagrams. That is not as a convention or a policy-based restriction but as something to generate a notion of connectivity between or among them without breaking the flow of the story. In a way, it is a work of literature which allows each person to build their own version of the story. As the director of that work, it is your responsibility to make sure that the pieces of the story have been properly orchestrated.