WSO2 integrates Azure Virtual Network Gateway with point-to-site connection and the Azure certificate method to connect to essential resources that are deployed in the Azure platform. However, this approach comes with a price of having to manage site reliability engineering (SRE) toil. Therefore, maintaining the certificates of developers and updating the Virtual Network Gateway (also known as VPN Gateway) should be attained.

This blog discusses how WSO2 creates the point-to-site connection with Azure resources, and how the repetitive task of adding, removing, and updating certificates on the VPN Gateway is addressed by automation.

To lessen the burden of toil and overhead, and to keep track of the updates made, developers were advised to generate and commit their certificates to a dedicated private Git repository. We developed an Automation Runbook using Azure Automation resources to fetch the certificates from the mentioned repositories, and to update them in the VPN Gateway.

We also developed a set of GitHub actions to execute the Automation Runbook when a pull request is merged to the relevant Git repositories. Once the certificates are synchronized with the VPN Gateway, developers can configure their local machines to connect to the point-to-site VPN.

Here is a high-level diagram that outlines the solution workflow. 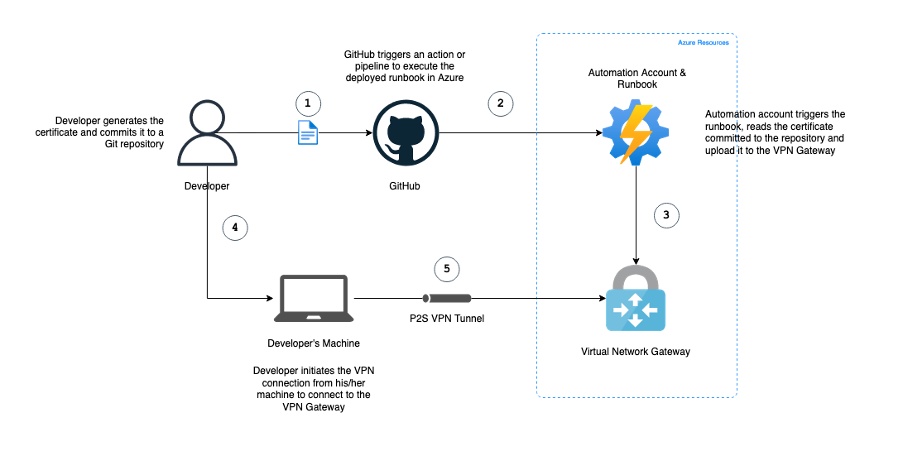 A private Git repository is used to manage the certificates of our developers. This enables us to keep track of the changes that are made to the artifacts. These certificates are only public certificates, and no private keys are stored or maintained in this repository.

Azure Automation and Runbooks provides a platform to develop PowerShell scripts to automate any monotonous tasks. Here is a sample Automation Runbook script written in PowerShell to read or fetch the certificates from the mentioned Git repository, and to update the VPN Gateway.

Refer the PowerShell Script in the following link.

All mentioned variables and secrets need to be created under the same Automation account in order to be available for retrieval during the execution of Runbook.

The Runbook requires access to the VPN Gateway resource. We have enabled the managed identity for the Automation account, and have been using it to assign roles. The steps are as follows:

The PowerShell script first retrieves all configured variables and secrets for the execution. It uses the provided GitHub PAT token to access the specified GitHub repository and fetch all approved certificates. Then, sign in to Azure and get all certificates that are already applied to the VPN Gateway. This performs a comparison operation and filters which certificates are to be added, updated, or removed. Finally, add, update, or remove the certificates sequentially from the VPN Gateway.

Developers at WSO2 have the need to access essential Azure VM resources with security in mind. The WSO2 SRE team provided an approach to access all the required Azure VM resources through a dedicated point-to-site VPN Tunnel. In this blog, we have provided an example of how the WSO2 SRE team approached the requirement by looking at an overall picture, and how it is achieved by lessening the toil and overheads using Azure tools such as Azure Automation account and Azure Automation Runbook.

The WSO2 SRE team is responsible for implementing processes and best practices that enable  Asgardeo, our IDaaS solution; Choreo, our next generation iPaaS for cloud native engineering; and other cloud-based offerings to run in a reliable, scalable, and secure manner. For more information, visit the WSO2  homepage,  events page or  blog.