What is the Streaming XPath Parser?

To select and obtain content from an XML document, we use the XPath (XML Path Language) query language. XPath plays a major role in SOA, since most of the messages going through the SOA environment are SOAP messages, which are a form of XML. To manipulate these SOAP messages, we use XPath expressions. We use XPath engines like Jaxen or AXIOM XPath to parse the expressions and select content from the XML file that matches the conditions specified by the expression.

For example, assume you use the expression "/data//book" to select content from the following XML:

The given XPath expression "/data//book" specifies that all the “book” elements that are children of the “data” element should be returned. Therefore, the engine must open each child element of the “data” element, determine whether it is a “book”, and then return all the found book elements as a list. Navigation through each and every node consumes time and memory, so the larger the XML file, the more parsing performance is reduced, regardless of the number of actual matches found. Because performance is especially important for an ESB, we need an optimized approach to parsing XPath.

Fortunately, in an SOA environment the message format is usually fixed, so we can use an optimized parsing approach instead of searching every element in the XML document. In WSO2 ESB 4.6.0, we introduced the Streaming XPath parser, which uses a special optimization designed to handle the common use cases in an ESB environment. This feature is build on top of the Pass Through Transport of the WSO2 ESB.

Following are the key characteristics of the Streaming XPath parser.

The advantage of this approach is that AXIOM will not consume the unwanted part of the steam, thereby reducing the memory and time taken to open an XML document as a Java object model.

For example, assume we use an expression like "/data/book/author/name” against the following XML:

The result of the given XPath will be the first book element. The book element inside the book-rack element will be not in the result.

This approach saves the time it would take to search all over the XML tree to get a result, and it reduces the memory needed to do the parsing, since we don’t traverse the rest of the document after we have found the first result.

The implementation of Streaming XPath uses a component-based architecture. The first thing the parser does is create an AXIOM data model of the XML document using the given input stream to the XML. Using the data model, the parser finds the result for a given XPath expression.

There is a set of components (Java classes) that are responsible for performing simple operations on the AXIOM data model. These components are like a component of a processing chain in a manufacturing plant. Each component will take an input (here it is an OMElement) and will output a String as a result. For example: 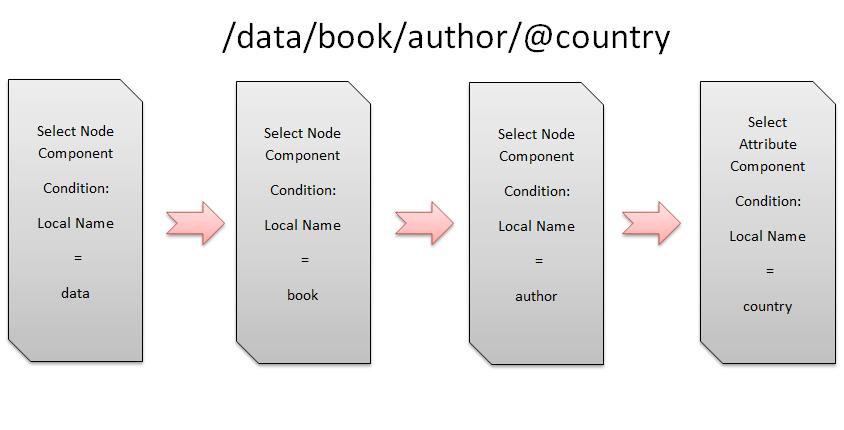 Here the AXIOM data model for the XML document will be passed to the first component, which will choose the first element that has the local name “data”. It will then send that element to the next component to select the book child of that element. Likewise the last component will output the result of the XPath expression.

In summary, here's what happens inside the Streaming XPath parser:

How is the XML processing component chain created?

For that matching and component chain creating process, we use a language-analyzing tool called Antlr. Using Antlr, we check whether a given string matches a particular syntax, or set of rules, which is provided in a grammar file. We have created a grammar file called XPath1.g, which contains all the rules of XPath that we support. Using that grammar file we analyze XPath expressions. So we can choose the XPath expressions that can be parsed via Streaming XPath. 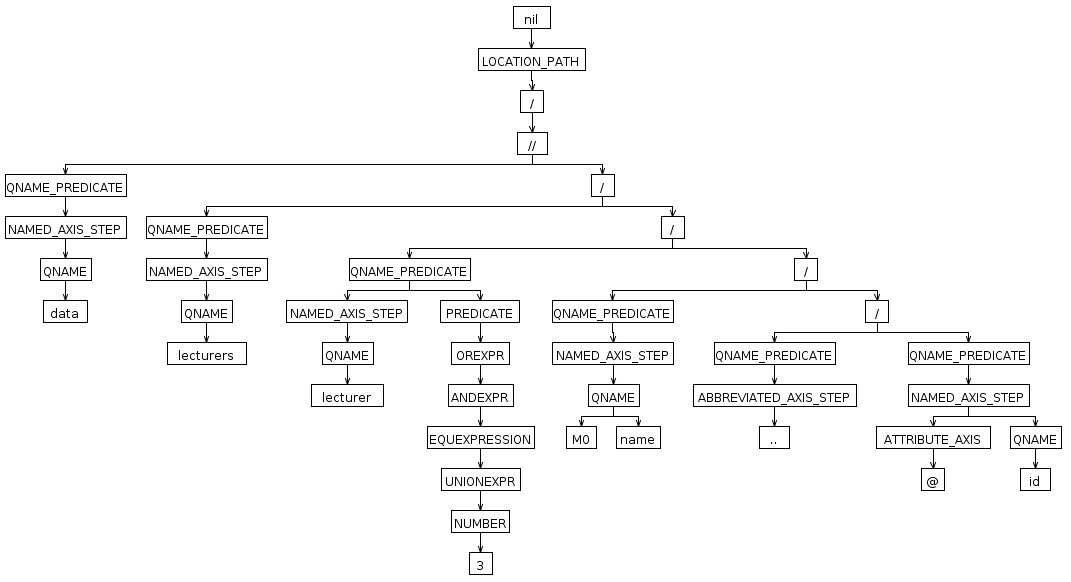 Antlr provides the functionality to generate Java code according to the structure of the syntax tree. The code parts to be included are specified in the XPathWalker.g file. Antlr will merge all the code parts into a Java class. We create the component chain using the tree generated for the XPath expression, so we have added code segments to the rule set to create the competent chain at the end of analyzing the XPath expression.

Following are the Java components in the Streaming Parser:

In summary, we analyze an XPath expression as follows:

The constructor of the Synapse XPath class checks whether Streaming XPath is enabled through this property. If yes, it will analyze the given XPath expression using Antlr. If the expression matches the conditions, the Streaming XPath Parser is initialized. If the expression doesn’t match the conditions, the default Synapse XPath Parser is initialized. The following code shows how this is done in the constructor:

When a message comes in while the Streaming XPath parser is enabled, an input stream to the incoming message is sent to the parser, and the result will be obtained. Otherwise, default Synapse XPath is executed. The following code shows how this is done:

You can further look at the code of the Streaming XPath implementation here.

The ESB-specific customization and optimization of XPath parsing through the Streaming XPath parser provides a huge impact on performance. It has doubled the performance of the XPath evaluation process compared to the previous implementation.