More and more organizations identify the need to expose their business capabilities as APIs to a developer community. This provides the ability for the developers to develop applications that can reap the benefits of the organization’s IT services capabilities and to add value to the organization as well as its customers. Exposing APIs to a developer community would require the organization to focus on aspects of API Management (API lifecycle management, developer management and access control) as well as to ensure that APIs are exposed in formats that are acceptable by the developer community. This would require the organization to follow a layered architecture whereby the API management functionality is performed by a Façade layer and the message transformation required for APIs to be developer friendly, to be done by a Mediation Layer. Similarly, it is important for an organization to separate these two layers; however, the separation of these layers would de-couple the Mediation Layer from API management data that might be required for specific mediation logic. The JSON web tokens (JWT) can be used to provide the flexibility for the Mediation Layer to use API Management data in the mediation logic. This would allow seamless integration of the Façade layer and the Mediation layer in a de-coupled architecture.

A Façade layer would be used in a scenario where multiple APIs are required to be exposed to a developer community. However, due to the heterogeneous nature and the complexity of the backend services, they cannot be exposed directly as APIs to application developers. These backend services would require a certain level of mediation before they would be ready to be exposed to the developers. Hence, it highlights the need to have a separate Mediation layer behind the Façade layer. Due to the dependency between the Façade layer and the Mediation layer, organizations are bound to couple these layers into a single layer (Fig 1.0). Coupling these two layers would increase the complexity in the Façade layer, create architectural limitations, limitations in scalability and would require a significant level of mediation logic to be outside the firewall if the APIs are to be exposed to external developers. The solution to this problem is the use of the API Façade pattern. 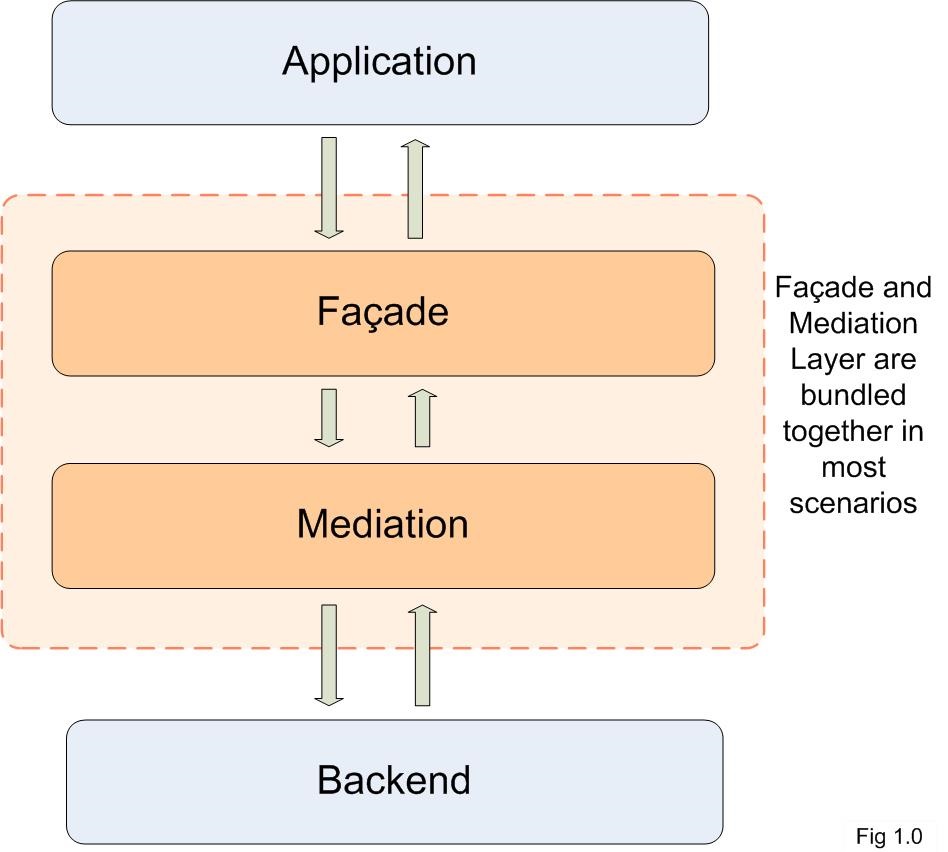 What is an API Façade? 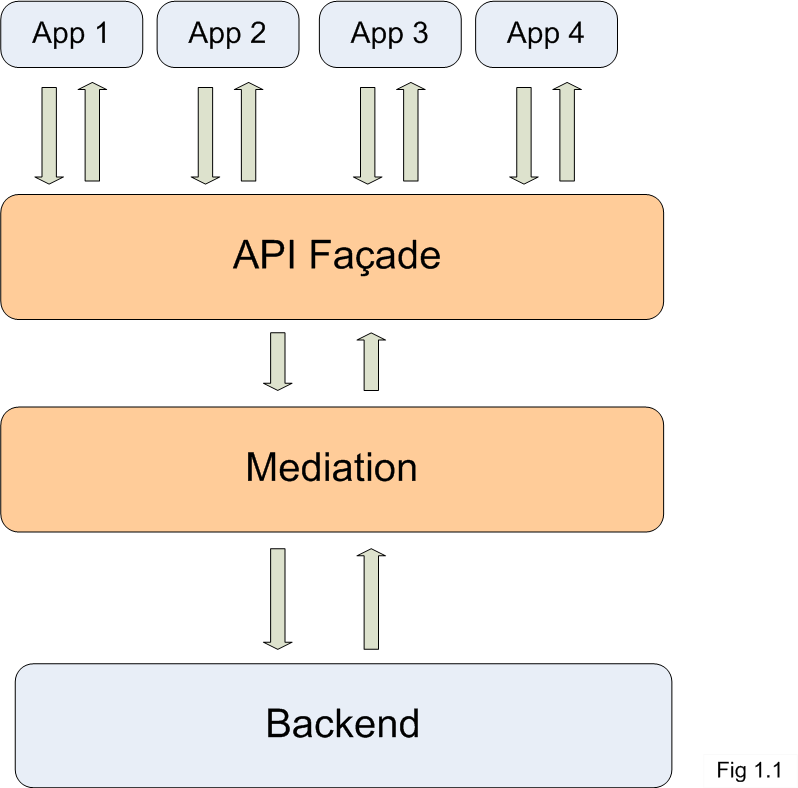 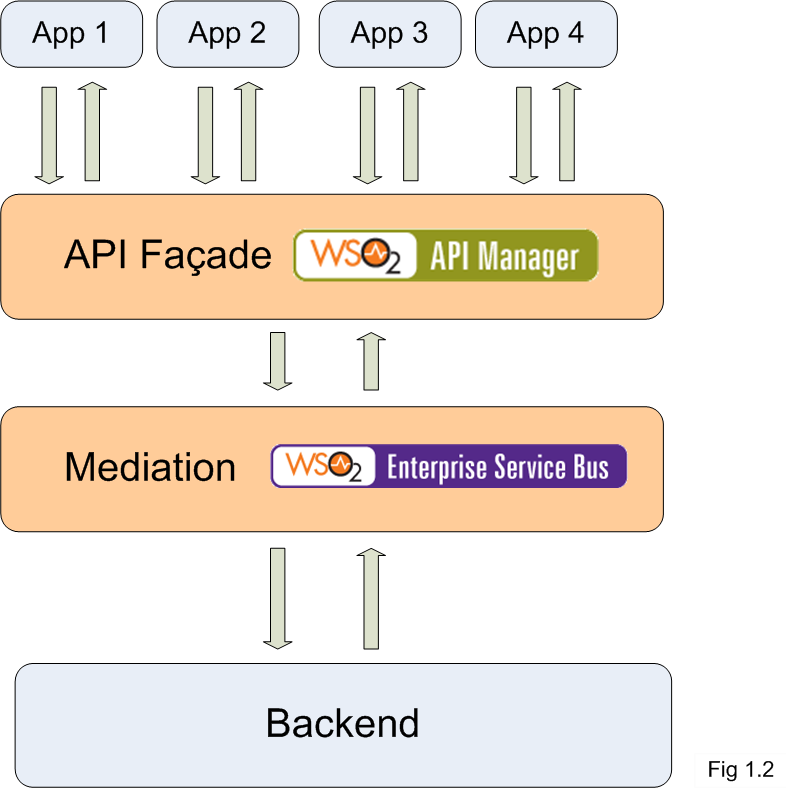 A JWT provides a compact URL safe mode of transferring data among two parties. Data transferred are represented as JavaScript Objects Notations (JSON). Hence, it provides a lightweight data transmission medium compared to XML. In the case of the WSO2 API Manager, JWT would allow vital API access-related information such as information on the API subscriber, subscribed application, API version and many other information to be communicated to the Mediation layer. Given below is the API Manager configuration to enable JWT in the WSO2 API Manager.

A brief description of each property is given below.

The process involved can be listed down as follows

1. The API Façade layer would expose the web service as a REST API to the application. The application would make REST invocation to the endpoint exposed by the API Manager.

2. The Façade layer would pass the request to the Mediation Layer along with a JWT, which contains the API access details.

3. The Mediation layer would perform a protocol transformation to create an SOAP message payload from the REST request.

4. JWT is passed from the WSO2 API Manager as an encoded value. This encoded value is required to be decoded at the Mediation layer by the WSO2 ESB to extract the application name required.

5. The Mediation layer would add the application name in the SOAP message payload.

6. The request would be sent to the backend system

The scenario can be illustrated as shown in the diagram below.

WSO2 ESB would be used to build the Mediation layer for this scenario. Let’s begin by starting the WSO2 ESB. The ESB should be started with the port offset of 1 (since we plan to run both the API Manager and ESB together). Port offset can be set in the

file where <ESB_HOME> is the ESB binary distribution folder. Set the offset value as below.

2. Create the mediations required for the backend service.

With the use of the WSO2 ESB, we create the required mediation that would allow an SOAP service to be exposed as a REST API. Once the configuration is completed, the mediation can be accessed as a REST API from the ESB. The ESB would provide the endpoint of the newly created REST API, which would be invoked by the WSO2 API Manager at a later stage in the process flow.

Given below is the synapse configuration of the ESB.

Start the WSO2 API Manager. Ensure that the JWT is enabled based on the configuration given above.

4. Publish the API in the API Manager

An API needs to be published in the API Manager that would be made available in the API Store. The API’s production endpoint should point to the API endpoint of the REST API within the WSO2 ESB.

The developer needs to subscribe the API that was published. The API should be subscribed to an application group that can be created within the API Manager. This application name would be used by the Mediation layer to identify the application from which the service call is made.

A service call can be made to the API Manager’s exposed end-point using the in-built REST client of the WSO2 API Manager or using CURL. Service call should be formed in the following format.

The items inside the curl bracket ({}) should be replaced by the actual API Manager endpoint. The value 100000 represents the amount that is sent to the backend service to calculate the applicable interest rate based on the application. Based on the configuration included in publishing the API, the Authorization token may also be required to be passed in the header. Given below is the format for the Authorization token.

The values inside the curl bracket ({}) should be replaced with the Authorization token of the application.

· Endpoints are specified inside synapse.xml but it is a 'best practice' to store the endpoints in the Governance Registry of the WSO2 ESB.