Natural Language Processing (NLP) relates to systems’ ability to process and understand natural language input. With NLP, we can write computer programs to extract information and relationships, and derive meaning from natural languages, such as English. WSO2 CEP enables users to do such NLP operations that analyze and derive meaning from some English language input with a set of Siddhi extensions based on the Stanford Natural Language Processing Library. In this article, we will discuss the Stanford NLP library and the six Siddhi NLP query operations with examples.

Stanford Natural Language Processing Library includes a set of statistical NLP toolkits for various computational linguistic problems. The full set of stanford library distributions can be found at [1]. Among these, the WSO2 CEP Siddhi extension set of NLP operations use the following toolkits from the Stanford NLP Library distribution.

This distribution contains an integrated suite of natural language processing tools, such as tokenization, parts-of-speech tagging, named entity recognition, parsing, etc. Hence, we can identify base forms of words, their parts of speech, whether those words are names of companies, people, and markup the structure of sentences, etc.

This distribution helps to define a pipeline that enables the above tools with a simple configuration as shown below.

Each NLP Siddhi query operation will instantiate a Stanford Pipeline that enables tokenization, sentence splitting, POS tagging, lemmanization, named entity recognizing and parsing, when each query is initialized. That pipeline is then used to process each raw language input received with events. For more information on the Stanford coreNLP library you can refer to [2].

This framework enables defining patterns over text. Rather than working at character level as with standard regular expression packages, this framework can describe text as a sequence of tokens, such as words, punctuation marks, etc., which may have additional attributes, such as POS tags. Therefore, it supports writing patterns over those tokens. The syntax used here is very similar to the syntax of java regular expressions; the main difference is the syntax defined to match tokens.

In TokensRegex syntax, each token is represented by [

Below you can see some basic examples of expressions that we can use with TokensRegex.

As shown above, we can write simple expressions as well as compound expressions using !, & and |. Further, we can combine tokens using similar syntax as Java regular expressions, such as quantifiers, grouping, capturing, etc.

The table below shows a summary of syntax that can be used.

So with these capabilities, we can write more advanced regular expressions with TokensRegex to extract patterns from NLP processed text.

Below is an example of such regular expression that we have used in our samples to extract some phrases from a Twitter feed.

This expression checks for one or more tokens tagged with the named entity relationship as PERSON, ORGANIZATION or LOCATION followed by zero or more tokens, which is also followed by a token with lemmatization for donate. Then there should be one or more tokens with the named entity tag as MONEY. You can see that there are three groups here. But the middle group is marked as a non-capturing group. Therefore, with this expression, we can extract any phrase matching the full expression and also we can get the phrases matching the two groups within that matched phrase.

NLP Siddhi extension at CEP exposes this capability via findTokensRegexPattern function, thus a user can use TokensRegex pattern language to extract phrases matching a given regular expression. We will discuss about this query function later. For more information on TokensRegex you can refer to [3].

This framework enables defining patterns over Stanford NLP Semantic Graph structure. This framework can be used to identify graph nodes, their attributes and grammatical relations identified by Stanford dependencies utility via regular expressions. The parsed semantic graph is a directed graph with nodes and edges, where nodes represent the words and each edge represents the grammatical relationship between two nodes.
For example, let’s consider the sentence below.

My brother and I went to the market.

The Stanford parser will parse this sentence and will build the following semantic graph. 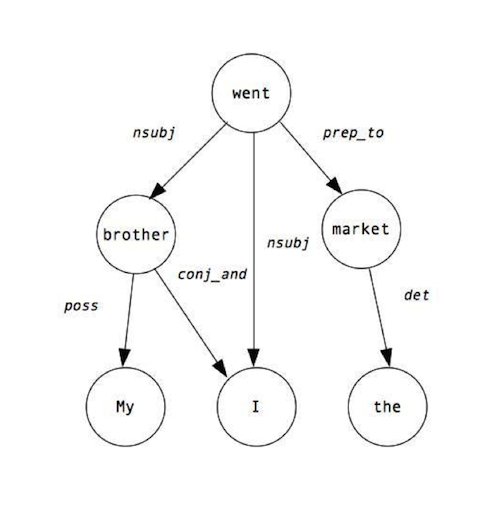 Each grammatical relation is held above a governor and a dependent. For an example if we consider prep_to relationship in above graph, we can see that this edge is directed from node went to node market. Thus, went becomes the governor whereas market becomes the dependent on prep_to. There are about 50 grammatical relationships defined in Stanford dependencies. For more information on Stanford dependencies you can refer their mannual at [4].

With Semgrex utility we can identify patterns in the Semantic graph structure described above. Semgrex patterns are composed of nodes and relations between them. Here a node is represented as {<expression> }, where <expression> specifies the attributes. We can define several attributes as {<attr1>; <attr2> ... }

Syntax for defining attributes is same as TokensRegex described before.
Similarly as in TokensRegex, regular expressions are marked within /<regex>/
Below you can see some examples on defining nodes in Semgrex.


In Semgrex, we can specify the relationships between nodes as below.


So with nodes and relations that described above we can build complex expressions.

Here each relation is matched relative to the first node specified in the expression. Therefore this expression means a node that is the governor of both nsubj relation and a dobj relation. It is similar to
{} >nsubj {} & >dobj {}

This means a node that is either a dependent on agent relation or nsubj relation in the graph.

This means a node that is a noun which is a dependent on prep_in relation or prep_on relation.

Here the pattern means a node that is a dependent on relation nsubj, i.e a subject of some node. Since we have named the governor node as “verb”, this pattern stores the governor node as well and we can get it via the defined name “verb”. Similarly we can name relations too.

This pattern returns a node that is a governor on either a subject or agent relation. But since we have named the relation as “reln” we can get the relation with that defined name.

This expression looks for nodes with lemmatization for die such as dies, died etc, which governs some other node named as diedsubject on relations like nsubj, csubj, xsubj, num or number. So this diedsubject simply represents the subject that has died it may be a number or some noun acting as the subject in the sentence.

So now we are going to discuss about the NLP query functions supported in Siddhi and we will look at some samples on how to use them. There are six NLP operations supported.

Each query function above wraps the core Stanford library capabilities that we discussed above. So lets look at each function in detail.

First check whether you have installed the WSO2 Carbon GPL - Siddhi NLP Extension Feature feature . You can check that by login to the management console and checking Installed features at Home > Configure > Features. If its not available you can build the extension from the source. For that, first build the orbit at [5] with maven. Copy the artifact stanford-nlp-3.4.0-wso2v1.jar to

In case you faced any problem building the targets, use the attached CEP server, stanford-nlp-3.4.0-wso2v1.jar and nlp-2.2.0-SNAPSHOT.jar.

Download the attached zip that bundles the six samples. Extract the zip and copy sample folders ‘1101’ to ‘1106’, to

In order to run each sample copied, go to

Each sample artifact will load the corresponding execution plan and a sample csv file that contains a set of tweets obtained from a twitter stream on Ebola. Each entry in the sample csv file is in below format, where the separator “~” is used to separate the event attributes.

So playing this file will generate an event stream for each entry in the file. Each generated event will have two attributes; Twitter username and the tweet of that user.

So here you can clearly see the events generated. The attribute match gives the NLP operation result along with the input stream attributes username and text. The function checks for words of entity type “PERSON” and for each found word generates an output event. Since we have passed true for the parameter group successive matches, the function has combined successive words for the given entity type. So it has generated only a single event for names like “Bill Gates”, “Kent Brantly” and “Paul Allen”.

There is a defined format for the dictionary file as below, and you can specify your own as required.

Element <entry> can contain any text that you want to match or identify as a particular entity.

You can try this operation with the sample 1102. First make sure that you have copied the dictionary.xml in resource folder of the attached zip to

Start the server with the sample artifact.

This execution plan will contain the below query.

Just play the sample file uploaded via EventSimulator to generate events. You would see the output in the console.

In the query we have defined the entity type as ‘PERSON’. So this will match the entries that we have defined in the dictionary under ‘PERSON’ with the input event texts. So in this case it should match Obama, Kent Brantly, Bill Gates and Paul Allen. Check the output. You can see that events are generated for above matches.

You can try this with sample 1103. The execution plan will contain the below query.

This query will looks for subject, verb, object relationships for any form of the word ‘say’ acting as a verb. Play the sample file uploaded via EventSimulator to generate events. You would see the output in the console.

You can try this operation with the sample 1104. The execution plan will contain the below query.

Look at the regular expression passed to the query. There are three named nodes as verb, subject and object. This expression will mark the words with lemmatization donate as the verb, and the nouns that depend on this word with nsubj relation as the subject. Then mark nouns or numbers that depends on this group as the object.

Play the uploaded csv file from the EventSimulator to generate events and check the output.

Try this operation with sample 1105. The execution plan will contain the below query.

Look at the Semgrex pattern given. This will look for words with lemmatization die which are governors on any subject or numeric relation. The dependent is marked as the diedsubject and the relationship is marked as reln. Thus, the query will return an output stream that will out the full match of this expression, i.e the governing word with lemmatization for die. In addition it will out the named node diedsubject and the named relation reln for each match it find.

Play the sample csv from Event Simulator and check the output in console.

Try this with sample 1106. The execution plan will contain the below query.

Look at the TokensRegex patterns passed to the query. It defines three groups and the middle group is defined as a non capturing group. The first group looks for words that are entities of either PERSON, ORGANIZATON or LOCATION with one or more successive words matching same. Second group represents any number of words followed by a word with lemmatization for donate such as donates, donated, donating etc. Third looks for one or more successive entities of type MONEY.

Play the sample csv file from the Event Simulator and check the output in console.