Many organizations embarking on the journey of APIs would eventually need to use an API management solution to manage these APIs. In most cases this API journey starts as a pilot project and strict organizational processes and practices adopted in areas of software development is not included in such pilot projects. More often than not these API initiatives become successful and creates the need to ensure the API management practice also falls in line with the organization’s processes and practices. One such example would be the use of isolated environments for development, QA, and production with strict controls on artifact access and modification. This article will focus on how WSO2 API Manager can be deployed in a multi-environment setup and how API artifacts can be managed and migrated between environments while adhering to standard processes and practices that are practiced in the software development space.

In many organizations this responsibility of artifact migration lies with the devops team, who inevitably have access to and control of source and destination environments. To support this process, the product should allow a mechanism where its artifacts can be bundled and migrated with minimum intervention. Ideally, the devops engineer doesn’t need to be familiar with any user-interfaces or operations of the product, but should be able to do the migration via a command line interface that can either be scripted or manually executed.

Most WSO2 products provide a Carbon Archive (.car) based artifact bundling mechanism, which when used with WSO2 Governance Registry, can provide a standardized way to migrate artifacts between autonomous environments. Carbon Archive based artifact bundling mechanism only works for artifacts that reside in the file system, hence this mechanism doesn’t work for WSO2 API Manager artifacts as API information is stored both in the file system as well as in the database. To facilitate bundling of APIs in WSO2 API Manager, a separate API Import/Export capability has been introduced to the WSO2 API Manager. This API Import/Export feature is not bundled with the product distribution, but needs to be deployed as a separate web application to the WSO2 API manager.

The API Import/export web application allows APIs to be exported and imported via a RESTful API. This would allow a user who doesn’t require any knowledge on the API manager to export and import APIs as required. The API Import/Export capability is secured via basic authentication and would require admin or equivalent credentials to import/export the APIs.

The API migration process can be depicted by figure 2 below. 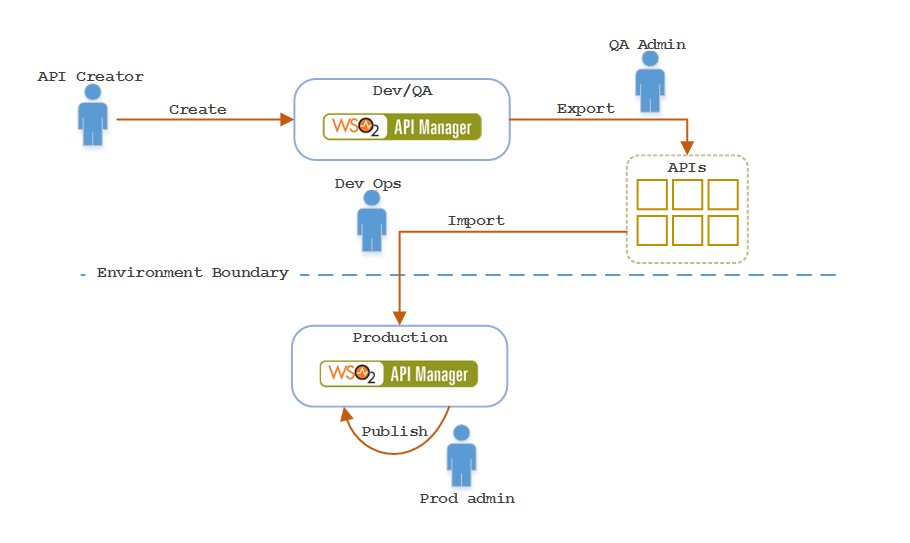 Given below are the steps required to configure the environments to support multi-environment artifact migration.

Adhering to standard software lifecycle process is important to move an API strategy from a mere pilot project to a full blown deployment. This article looked at how WSO2 API Manager can be configured to support a proper artifact migration process between different environments within the organization.