WSO2 API Manager is an open-source solution to design, develop, publish, document, and consume APIs in a secure manner. The solution is highly extensible and customizable and can be deployed in highly scalable configurations.

Architecture of the API Manager tile

The PCF tile for WSO2 API Manager is built using native PCF components. Refer below for details on the tile’s building blocks.

What is a PCF tile?

A tile in the PCF world is a self-contained archive that contains a set of software that is intended to be installed in a PCF environment, which, in turn, makes a set of software services available for application developers. The archive itself should have the “.pivotal” extension and is typically installed via the Ops Manager. User inputs required to run the software can be passed to the tile via the Ops Manager during the installation process.

What is a BOSH Release?

Cloud Foundry BOSH is a tool for release engineering, which is capable of managing deployments and the lifecycle of distributed systems. Through its Cloud Provider Interface (CPI) abstraction, BOSH is capable of supporting multiple infrastructure as a service (IaaS) providers, such as AWS, GCP, Azure, and more. BOSH allows software developers and distributors to package their software in an infrastructure-agnostic manner, thereby unifying the software release process.

A BOSH Release is a versioned archive produced by BOSH. It contains a set of software packages and instructions/scripts on how to install/execute it. In other words, a BOSH release is a comprehensive software package that includes all the required binaries (e.g., database drivers), configuration files, startup scripts, and anything else required to deploy and run software in a reproducible manner.

Key components of a BOSH Release

At a higher level, there are three main components used to create a BOSH release.

Internals of the WSO2 API Manager tile for PCF

The WSO2 API Manager for PCF tile simply wraps a BOSH release of WSO2 API Manager. The tile provides a convenient mechanism for configuration via forms. Operators configuring the tile should configure it with appropriate values prior to installation.

WSO2 API Manager requires external databases that store various information, such as API metadata, user data, and security tokens. The underlying database server can be a managed service such as Relational Database Services on AWS or an on-premises database server. The API Manager tile abstracts out the underlying database infrastructure by prompting the operators to enter the database connection information via forms. 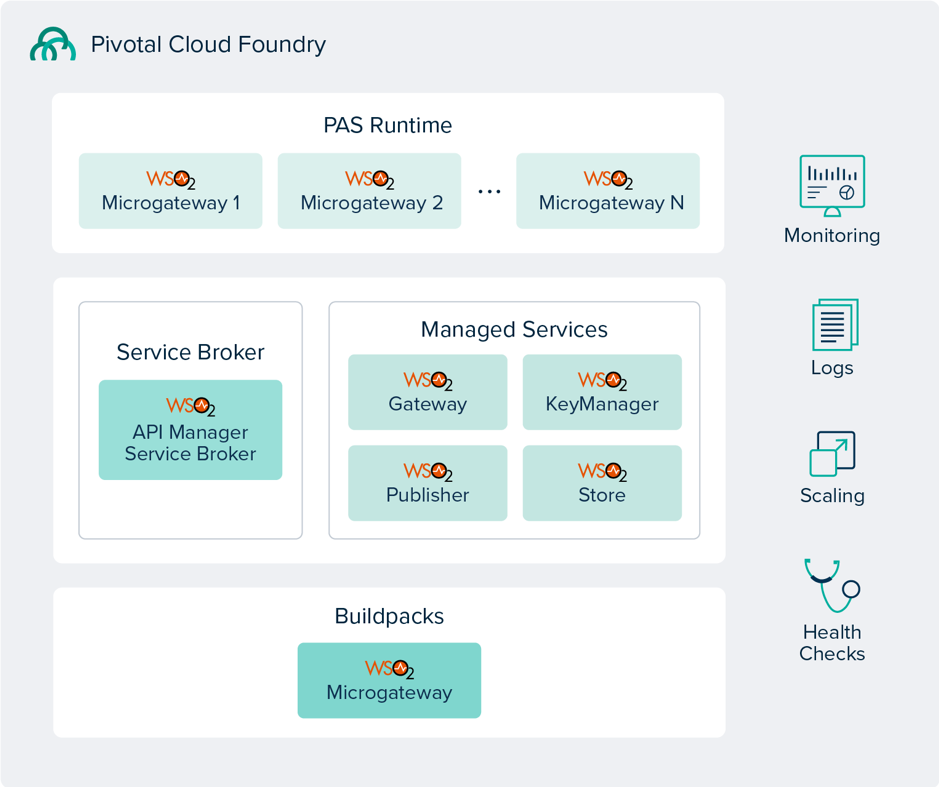 The above diagram shows the high-level component architecture of WSO2 API Manager for PCF. The tile provisions a distributed API Manager deployment that allows the API gateway and key manager to be scaled independently.

Note that the previous section provides a brief overview of BOSH components used to implement the WSO2 API Manager bosh release. For more information on how to implement BOSH releases using these components, please follow the embedded documentation links.

The key benefits of running WSO2 API Manager on PCF

What’s around the corner?

The WSO2 API Manager tile for PCF simplifies the installation of WSO2 API Manager on PCF. The next step is to provide functionalities necessary for an application running on Pivotal Application Service to integrate with API Manager in an effective manner. Some proposed solutions to achieve this are discussed in the next section.

Service broker is a tool that allows vendors to offer their services independent of the underlying IaaS. Service broker adheres to the Open Service Broker API, which specifies how the lifecycle of a service should be managed. The platforms interact with the service broker provision service and manage those service effectively.

Once the WSO2 API Manager service broker is installed in the PCF environment, users/developers would be able to interact with the broker via the Cloud Foundry CLI. The service broker would provide the following capabilities:

Once the OAuth2 applications are created, developers will be able to bind it to their applications running on Pivotal Application Services, which would allow the applications to integrate with APIs deployed in WSO2 API Manager in a seamless manner.

WSO2 Microgateway is a lightweight, developer-centric decentralized API gateway designed to facilitate microservices architecture. With the proposed Microgateway Buildpack, developers would be able to deploy a microservice as a Cloud Foundry Application by running the cf push command.

Shariq is a Technical Lead and part of the Cloud team at WSO2. His areas of interest include Java Enterprise application design and development, distributed business applications, distributed artificial intelligence, and agent technology.