It is obvious that you cannot achieve all 3 of the above objectives in the same deployment. For example, if you need to partition user information by region in order to comply with regulations, you have to forgo on response time to some extent. Likewise, you need to settle for trade offs depending on your priorities.

This article is going to focus on multi-region deployments for WSO2 Identity Server (IS) and as such, we assume that the resources protected by WSO2 IS, such as web applications, APIs, etc. are as close as possible to the user, to WSO2 IS, and to each other, so that they they don’t significantly impact on the overall response time.

Data replication is a crucial discussion topic when considering multi-region deployments. WSO2 IS data can be broadly categorized into three significant types as related to the subject of this article:

In multi-master replication across regions, all regions can accept write requests and sync modifications to the rest of the regions, maintaining read and write availability through region failures. In primary-secondary replication, a single region is designated as the master which is responsible for write operations. Multiple secondary regions can read the data, and data is always synced from primary to secondary.

The multi-master replication technique has its limitations. Most multi-master systems are only loosely consistent, i.e. lazy and asynchronous, violating ACID properties. Eager replication is complex and increases communication latency. When the number of nodes increases and latency also increases, issues such as conflict resolution become intractable. In contrast, the primary-secondary technique doesn’t suffer from these problems.

LDAP directories on the hand are not widely known to support multi-master replication across regions.

Considering all of the above discussed facts, a data replication technique independent of the underlying database technology could be your first preference.

Based on the 3 types of data, we can identify 3 types of multi-region deployment use cases for WSO2 IS:

You can see that we’ve left out replication of operational data from all the scenarios. This is because replicating operational data can be very costly due to very frequent updates and WSO2 IS doesn’t have an in-built mechanism to sync operational data across regions, relying solely on the database replication technology to handle this. If the use case requires us to replicate operational data and the relevant database technology can support the requirement with consistency and low latency, then we can use it. One of the drawbacks of not being able to replicate operational data across regions is that in the event of failover, the user may be required to re-authenticate or the application may be required to re-start the operations currently in progress. Another drawback is that if the routing policy is setup to route to the nearest region, that could change if a user travels across regions during an active session, which again would result in re-authenticating the user or restarting the operation in progress.

We are going to look at multi-region deployment patterns for use case 1, which is replicating identities, entitlements and configuration across all regions. Specifically we are going to look at an alternative approach to multi-master replication technique for an organization which has IT operations globally. This use case will ensure high availability across regions, better response times for users, and it doesn’t partition data by region.

Multi-region Deployment for Use Case 1 - Sync Identities, Entitlements, and Configuration Across Regions

In order to understand this section better, a definition of what is meant by regional identity provider is needed. This phrase refers to the closest identity provider in the region, and has to be specified relative either to the physical user or application instance. 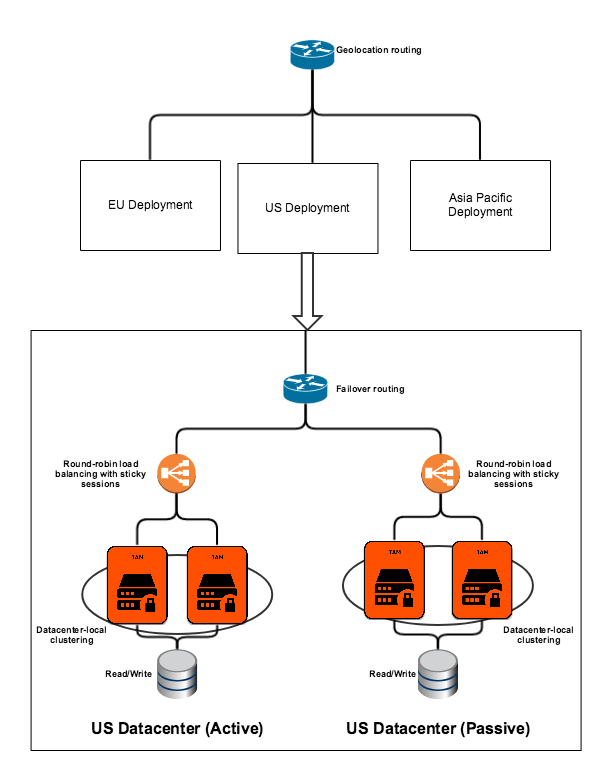 In this deployment, since identities, entitlements, and configurations are replicated across all the regions, users and applications could potentially interact with any of the regional identity providers.

Clustering will only be done within a data center, with no clustering in-between data centers.

Now we will look at two possible network topologies for application-level replication of identities and entitlements across regions. 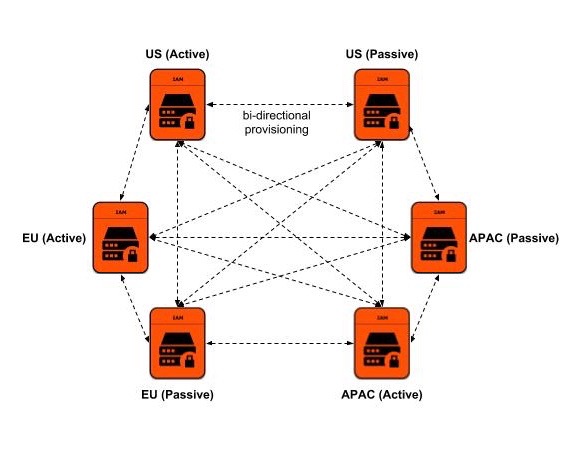 The configuration data of the PSPs will not be synced because, they will be slightly different to one another in the mesh topology. Moreover WSO2 IS doesn’t have an in-built mechanism to sync configuration data across regions. Therefore configurations will be manually done for each region as the number is manageable.

The fully connected mesh topology is good as long as the number of PSPs are manageable. One of the drawbacks of the above topology is that if the number of PSPs increase, the number of connections between these data centers PSPs grows quadratically, becoming difficult to manage. The PSPs become tightly coupled to one another which means adding/removing/updating a PSP becomes difficult. Furthermore, there is no single place to govern the syncing process. Monitoring failed requests and manual retrying has to be done in each PSP. To overcome this we could redesign this solution to follow a hub-and-spoke topology, which we will discuss next.

In this topology, there is one central provisioning service hub (PSH) and all the PSPs connect to that PSH. 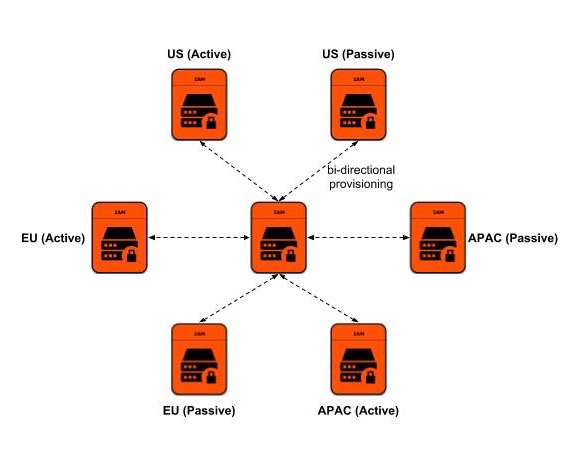 The PSH can operate in two modes:

By introducing a central PSH, we are introducing a single point of failure. The logical next step is to have a highly available deployment of the PSH by having a mirrored deployment across in another region. However by doing this we are once again faced with the same challenge of syncing data between the regions of the PSH.

In the stateful mode however, the failed outbound change requests are stored at runtime. To ensure fault tolerance of the PSH across regions, configuration as well as operational data replication is needed. Configuration data can be manually done in each region. For operational data on the other hand, we can either apply the application-level replication technique, or continue with no replication with the limitation that the failed outbound change request queue in the passive region would always have to be manually emptied. Given that multi-master technique across regions is supported by the database, it isn’t a bad solution either to sync configuration and operational data because the number of regions of the PSH will be typically limited to 2. 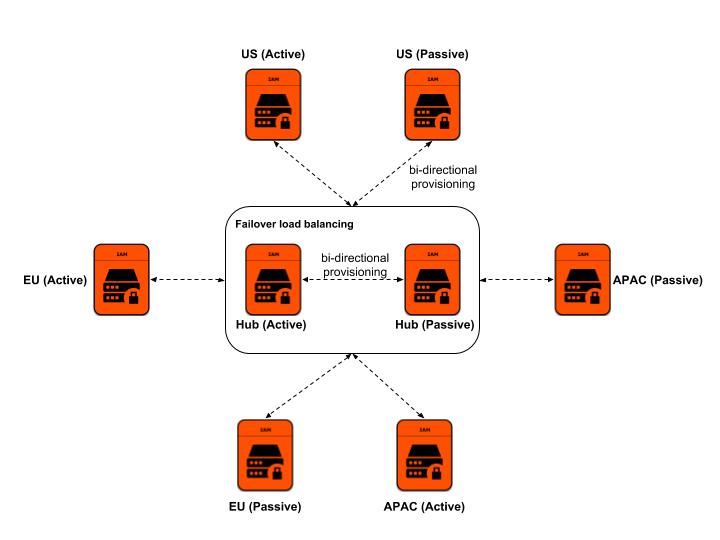 The deployment architecture for the hub-and-spoke model will be very similar to figure 1, but in addition there will be the PSH deployment similar to US, EU, and APAC deployments as shown in the diagram.

A Special Look at OAuth2

To overcome this problem, the applications have to make the token calls using the region specific DNS URL. The following solutions can be considered and they’re listed in increasing order of implementation complexity. 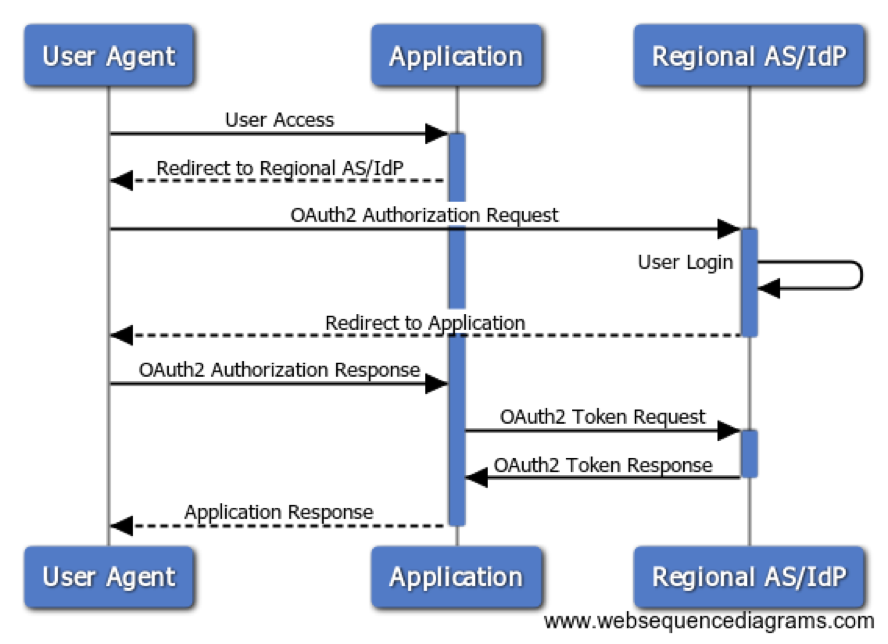 Figure 5: Sequence diagram for OAuth2 flow after applying solution 1 or 2

The sequence diagram after applying solution 3 will be as follows: 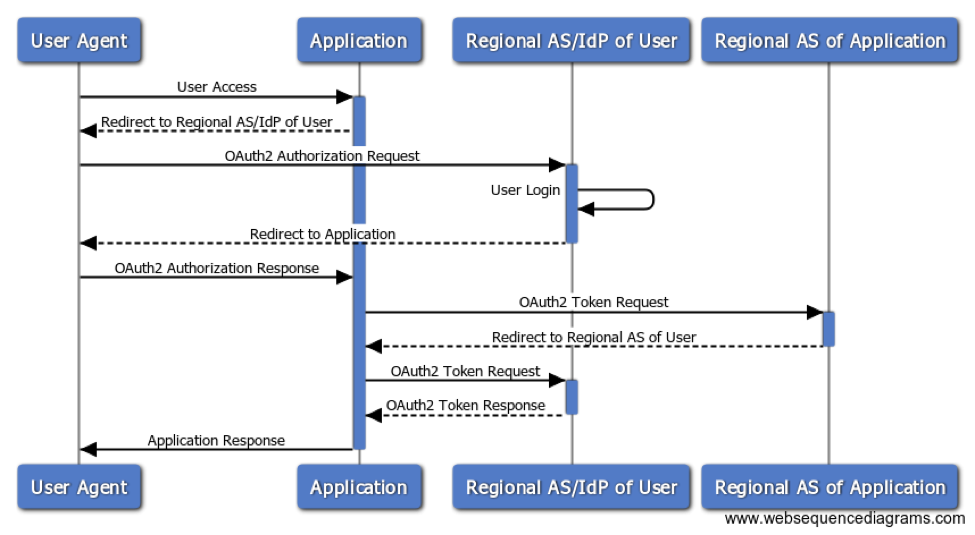 The sequence diagram after applying solution 4 will be as follows: 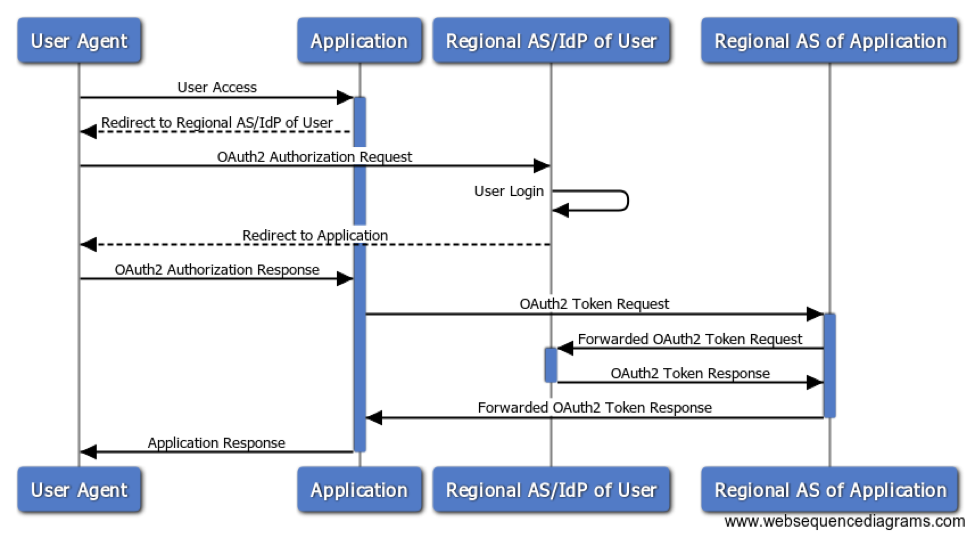 Central Authentication Server (CAS) is also a similar authentication protocol which consists of two calls, one redirection via the user agent and another direct call to the identity provider.

Another use case where the region of the resource becomes important, is the OAuth2 bearer access token introspection call. The bearer access token that is issued by the authorization server has to be validated at the resource server, by sending it over to the authorization server for each API invocation. This is generally acceptable for a single region solution. However, when you expand the same solution to multiple regions, the delay introduced by the access token introspection call that goes across different regions is significantly high. One of the mechanisms which can be used to reduce this delay is having an access token cache in the gateway. This will make sure that only the first API invocation using a particular token will have to go over the network for introspection. The subsequent invocations with the same access token will be validated from the gateway cache.

Caching in the gateway would be acceptable for certain organizations depending on their security policies. However, it may not be acceptable in some organizations due to their stringent security policies. In such situations you could use self-verifiable/self-contained access tokens [2]. Using these kind of access tokens have the advantage of not having to introspect them by calling the authorization server that issued them, but by verifying the authenticity of the tokens by verifying their signatures and parsing the information encoded in them.

In this article I’ve provided a high-level overview of the different multi-region deployment use cases for WSO2 Identity Server. We specifically deep-dived into use case 1, where we replicate identities, entitlements, and configurations across regions instead of relying on the multi-master database replication technique, with a special focus on organizations that have global IT administration.

In part 2 of this article series, we will deep-dive into use cases 2 and 3, where we replicate only configuration data across regions but partition user data by region, and partition all data by region respectively.