In this article we will explore

Why Do We Need to Deploy WSO2 API Manager in Kubernetes?

The technology industry is rapidly changing, especially for DevOps. It has shifted from virtual machine (VM) based approaches to a container-based approach. The VM-based approach has many disadvantages including

Unlike VMs, containers are lightweight and can stand alone. Only the app code, runtime, system tools, and libraries are packaged inside containers, without needing the operating system. Multiple containers can run on one machine and share the OS kernel with other containers.

Docker is an open source containerization platform that can be used to create, deploy, share. and run any application anywhere. Docker containers are isolated with the host, which makes it fast, efficient, reliable, and scalable. Even though containers are scalable, you need to do some things manually to scale it and after scaling up the containers need to be managed. As a result, Kubernetes comes into the picture.

Some advantages of deploying WSO2 API Manager in Kubernetes includes:

All these things can be achieved by deploying WSO2 API Manager in Kubernetes. 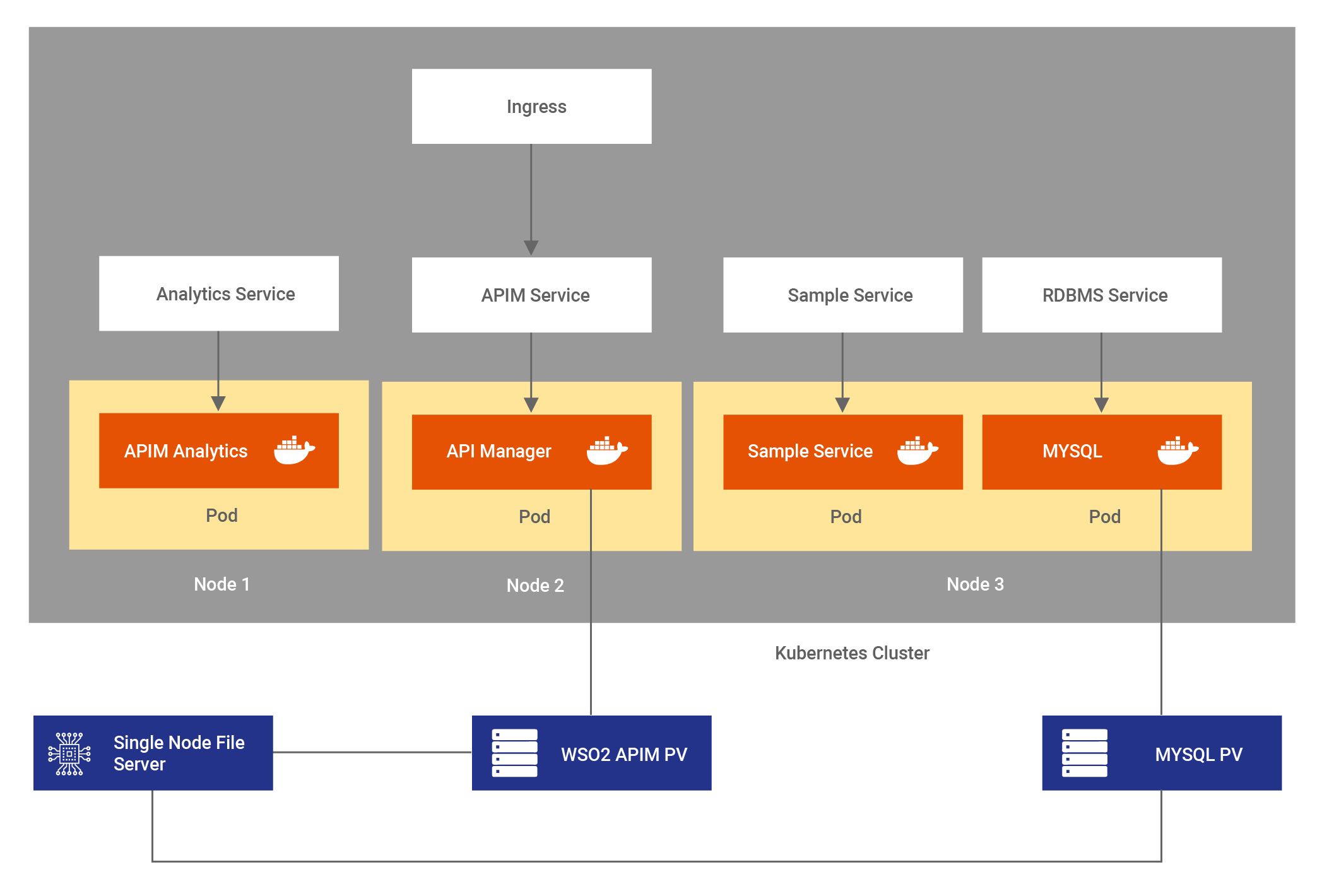 Figure 1 above consists of one WSO2 API Manager with Analytics, a MySQL database and a sample backend service. All the Docker images will be in WSO2 Docker Registry.

Autoscaling WSO2 API Manager Based on the Production Load

One of the major features in Kubernetes is autoscaling. If we deploy WSO2 API Manager in a VM-based deployment, when the production load is high you need should manually go and scale up the allocated resources. Depending on the load, Kubernetes autoscaler dynamically adjusts the number of nodes in the cluster and the number of pods in a deployment to meet the end user demand. This requires coordination between two layers of scalability:

We can use Kubernetes for the autoscaling WSO2 API Manager based on resource CPU usage. This is can be accomplished by using HPA.

HPA scales the number of pods in a replication-controller/deployment/replica-set based on observed CPU utilization provided metrics. In order to achieve HPA, the container can set its own requests and limits by including resources: limits and resources: requests.

These lines should be added at spec.template.spec.containers level in the Deployment.yaml file

The above sample defines that the container needs to be created with a minimum of 2000 milli-cores of CPU  and 2Gi of memory. If this specification fails to handle the production load, then the CPU cores will increase to 3000 milli-cores and memory allocated to this container will be increased to 3Gi.

Figure 2 below shows how HPA work. There’s a built in HPA controller in Kubernetes, which continuously checks the predefined metrics and target CPU utilization. It monitors all HPA objects and if the target is exceeded it will increase the number of replicas to maintain an average CPU utilization across all pods. 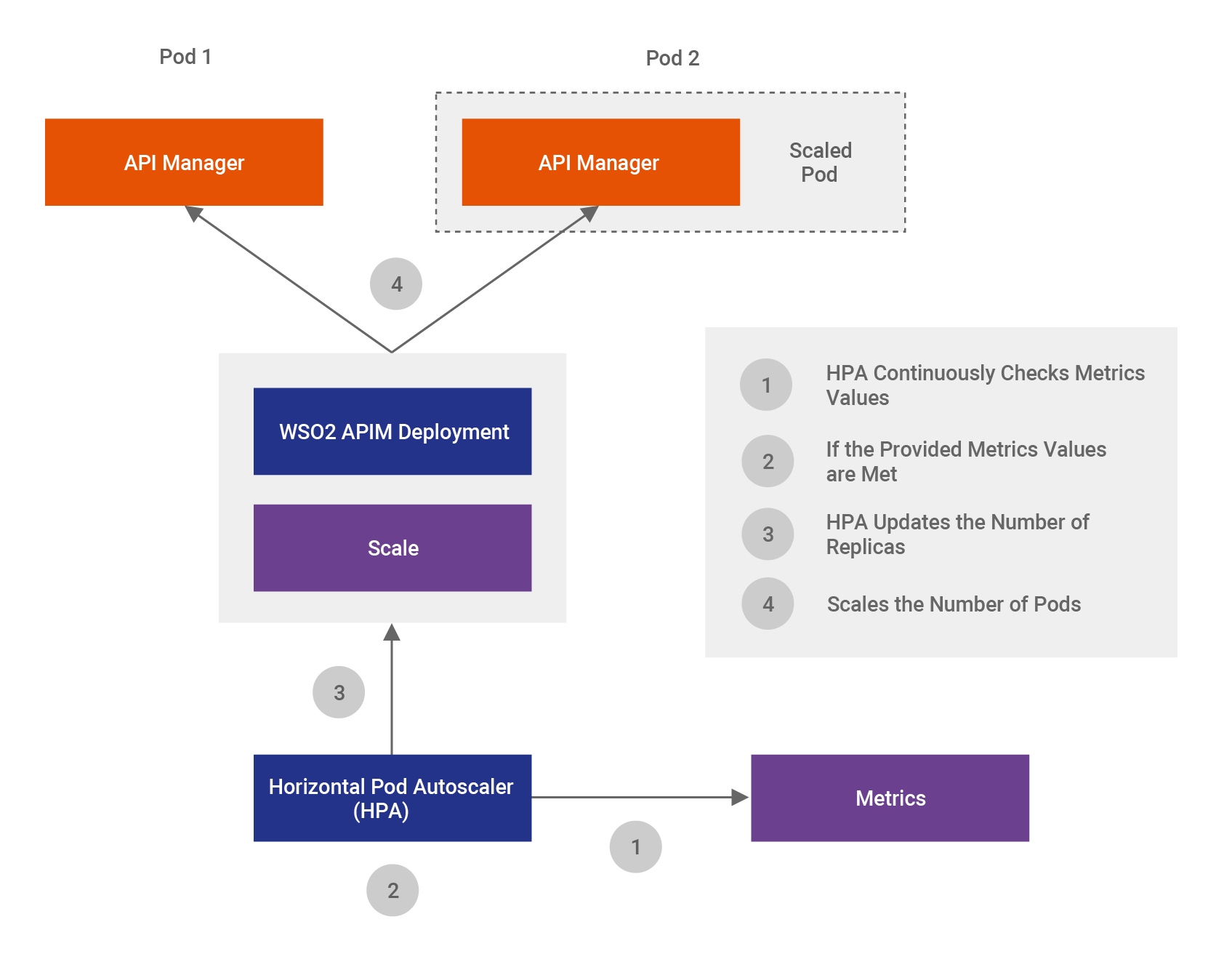 We can set a HPA using kubectl create command or using HPA YAML.

You need to define what you want to scale in spec.scaleTargetRef. It can be a Deployment/ReplicaSet/ReplicationController. In the above sample I have defined to scale “wso2apim-with-analytics-apim” deployment. HPA starts scaling if the target CPU utilization goes above 70% maintaining the pod count between 1 and 2 replicas of the pods. It will scale down again when CPU utilization is below the target value.

In a VM-based deployment, to update WSO2 API Manager, first we have to deploy the latest version of WSO2 API Manager in parallel to the already running version one at a time to avoid downtime. We also have to do all the configurations manually again, which takes time and extra resources.

When performing a rolling update, it allows us to catch errors during the process so that we can rollback before it affects all of our end users. This can be done by rolling updates in Kubernetes by simply changing the image tag to the latest version and changing to RollingUpdate strategy in the deployment YAML file.

You have to do a kubectl edit or just edit the YAML file as follows:

RollingUpdate strategy can be configured as follows:

Deployment ensures that only one replica of the new version is created at a time. At least one pod will be available during the update process as the maxUnavailable is 0. maxSurge specifies the maximum number of pods that can be created over the desired number of pods. We have used the readiness probe to ensure that the old pod won’t terminated until the new pods are ready to receive requests. All old pods won’t terminate at once. The initialDelaySeconds will be the Number of seconds to wait before performing the first probe.

The periodSeconds specifies that the kubelet should perform a liveness probe every 10 seconds. The liveness probe restarts the pod if it’s not working.

How to deploy WSO2 API Manager in Kubernetes and how to autoscale and do rolling updates are discussed fully in this blog. Check our webinar on this topic which was held recently and you can find the resources in samples-apim repository.

DevOps has shifted from a VM-based approach to a container-based approach. Docker is the most widely used containerization platform. Kubernetes helps with container orchestration and supports many complex scenarios. Some key benefits include autoscaling when the production load changes, launching new containers when there’s a failure, high availability, and monitoring capabilities. This article explored how these benefits can be leveraged by deploying WSO2 API Manager on Kubernetes.