A Primer on OAuth2 for Client-Side Applications: Part 4

This is the final article of my four part series on OAuth2 for client side applications (CSAs). I started this series by discussing the broader categories of CSAss and their legacy, more recent authentication and API authorization standards, and their pros and cons. In the second part, I discussed the challenges in CSAs, standard and non-standard recommendations that are widely employed to overcome these challenges and some non-standard solution patterns for single page applications (SPA) to overcome limitations in the existing standards I’ve discussed in part 1, specifically OAuth 2.0 proxy patterns. In the third article, I discussed the important security properties of cookies that make them a suitable candidate for a sender-constrained token technology and more non-standard solution patterns, specifically sender-constrained token patterns.

This article will focus on the latest and upcoming standards that follow a sender-constrained token pattern aimed at solving the challenges in CSAs and solution patterns being employed to improve CSA user experiences.

These are some of the latest and upcoming standards following sender-constrained token patterns:

Unfortunately, Token Binding for HTTP, on which the “OAuth 2.0 Token Binding” specification was based, suffered an important setback when Chrome announced that they would be dropping the support for it , iOS never committed to implementation. Hence, the technology is not widely adopted as of yet.

The next specification to emerge from the sender-constrained token technologies set of specifications is the OAuth 2.0 Mutual-TLS Client Authentication and Certificate-Bound Access Tokens (RFC 8705).

This specification is more promising in terms of potential adoption, but there are more details to iron out particularly in relation to using this from a browser, where an unexpected pop-out in the UX might be unacceptable.

OAuth 2.0 Demonstration of Proof-of-Possession at the Application Layer (DPoP)

The most recent specification to emerge from the sender-constrained token technologies set of specifications at the time of writing this is the Demonstration of Proof-of-Possession at the Application Layer (DPoP) [5].

Due to the lack of support for OAuth 2.0 Token Binding and undetermined user experience of mutual-TLS client authentication in user agents, neither mechanism can be used in practice today with most mainstream providers if an OAuth 2.0 client is a Single Page Application (SPA) running in a web browser.

This specification outlines an application-level sender-constraining for access and refreshes tokens that can be used in cases where the above two are not feasible. The main data structure introduced by this specification is a DPoP proof JWT. A client uses a DPoP proof JWT to prove the possession of a private key belonging to a certain public key. Roughly speaking, a DPoP proof is a signature over some data of the HTTP request to which it is attached to and a timestamp.

This mechanism allows for the detection of replay attacks with access and refreshes tokens.

See “JavaScript Parent/Child Windows or Modals” and “IFrame Login Experience” in this article.

As discussed in the previous parts of the article, most of the standards for securing a refresh token in CSAs are still not yet mainstream. Therefore in cases where none of the standard solutions can be implemented, using long-lived refresh tokens may be discouraged by the security teams.

A web view is an embeddable browser that a native application can use to display web content. A web view will commonly load web content remotely from an https:// or https:// location. This means you can take parts (or all) of your web app that lives on your server and rely on the web view to display it inside your native app. JavaScript running inside your web view has the ability to call native system APIs. This means you aren't limited by the traditional browser security sandbox that your web code normally has to adhere by.

Although earlier on web views were used heavily for native mobile application login through front channel identity federation, more recently web views have been highly discouraged for login, due to their security properties. In typical web-view-based implementations of embedded user-agents, the host application can record every keystroke entered in the login form to capture usernames and passwords, automatically submit forms to bypass user consent, and copy session cookies and use them to perform authenticated actions as the user. Web views don’t provide the user any guarantee that they are actually entering their password on the service's website rather than a phishing site. Even if the app is trusted, making it possible to access the user's full credentials is unnecessary. This violates the principle of least privilege and increases the potential for attack.

As web views are opened in the context of an application, the session cookies are not shared among multiple application sessions. Therefore you also don’t get single sign-on behavior.

The next step of the evolution for mobile application authentication and API authorization was to use an application in the mobile device, which acts as an agent for the OAuth 2.0 authorization service, provides single sign-on and manages API tokens. 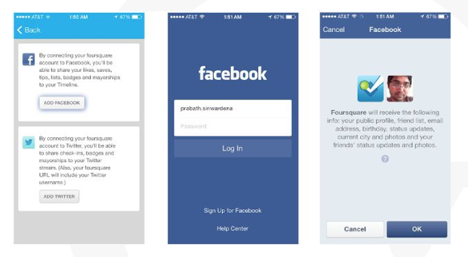 Though initially there were many proprietary vendor-specific implementations in the market, as time went by the OpenID Connect foundation formed a working group to develop a standard specification for this. The result of this was the Native Applications Single Sign-On (NAPPS) specification. However, with the more recent developments in mobile operating systems and the better user experience and security they can provide for in-app browsers, this specification would soon become obsolete. 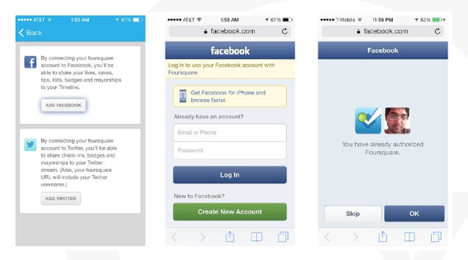 More recently, mobile operating system vendors like Apple and Google, have provided built-in support for web controllers with their respective operating systems, which provide the exact same functionality and security properties like the system browser, however with the kind of user experience you would get with web-views. Web controllers also provide cookie based single sign-on capability as with system browsers.

In this last part of the series, I have discussed the latest and upcoming standards following the sender-constrained token pattern aimed at solving the challenges in CSAs, and solution patterns being employed to improve CSA user experience.