Demonstrates the capability of the WSO2 DSS to poll a database table on predefined intervals to identify changes in the table contents and trigger an event
that would call a proxy service within the WSO2 ESB.

Setting up the proxy service in the ESB

Adding the scheduler for the Polling Service

Organizations depend heavily on databases as a data storage medium that can be accessed and queried by multiple systems within the organization’s IT
infrastructure. It is a common use-case to have the ability to listen to a database table to know if a database table is updated and trigger an event.
Similarly a trigger would also need to invoke a web service that resides on a different system and pass some information from the database. Even though
some database vendors support triggers natively, some databases lack this functionality. The WSO2 DSS can be used to implement database polling and
triggers irrespective of the underline database architecture of the organization.

Let’s look at how WSO2 DSS can be used to schedule tasks; figure 1.1 illustrates the process flow for scheduled database polling scenario using the WSO2
DSS and WSO2 ESB. 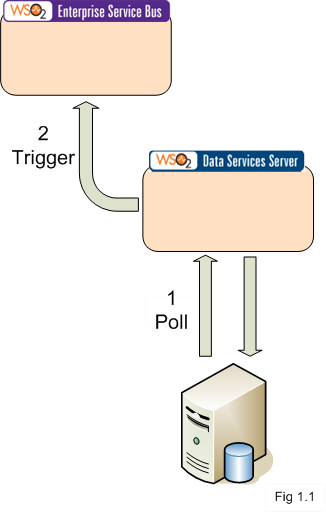 WSO2 DSS would poll the database at pre-defined intervals to identify any change in table contents. If a change is identify the WSO2 DSS would trigger an
event by calling a service exposed by the WSO2 ESB. A result-set from the database table would be sent to the WSO2 ESB as a SOAP message. Alternatively
WSO2 DSS can also be configured to support email notifications where a result-set can be sent via an email. 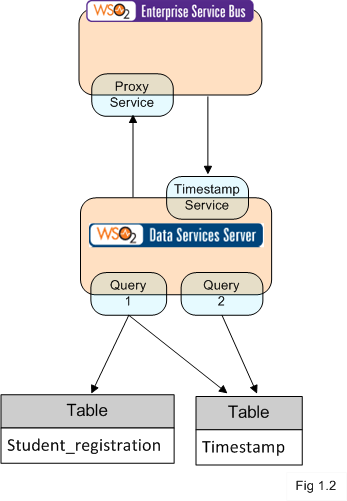 The table structure of the two tables is given below

SQL Statements required to create the following tables are given below

Start the WSO2 DSS and log into the admin console of the WSO2 DSS. Click on the create data service icon from the dashboard as shown below. 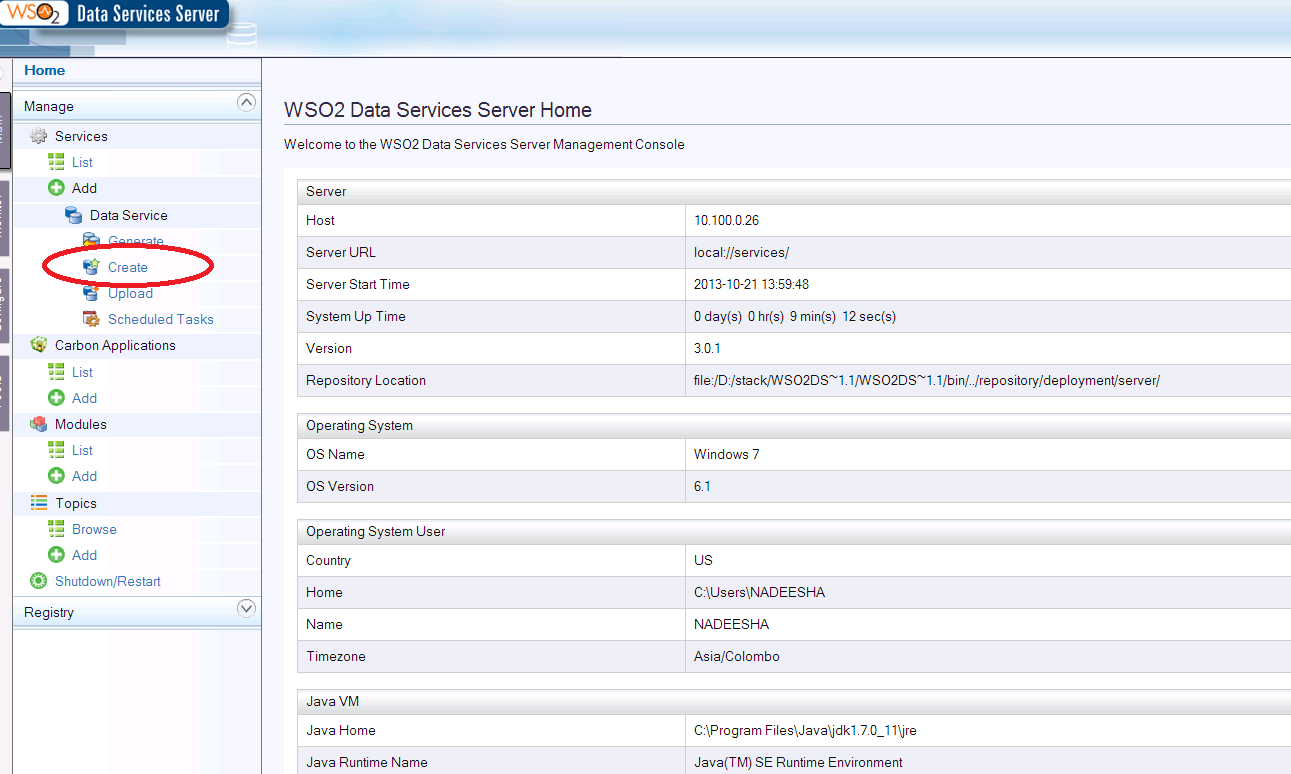 This would redirect the user to the ‘create data service’ page. Once inside select an appropriate data service name and add the following Service
Namespace. Once this is done set the advanced configuration as shown below and select next. 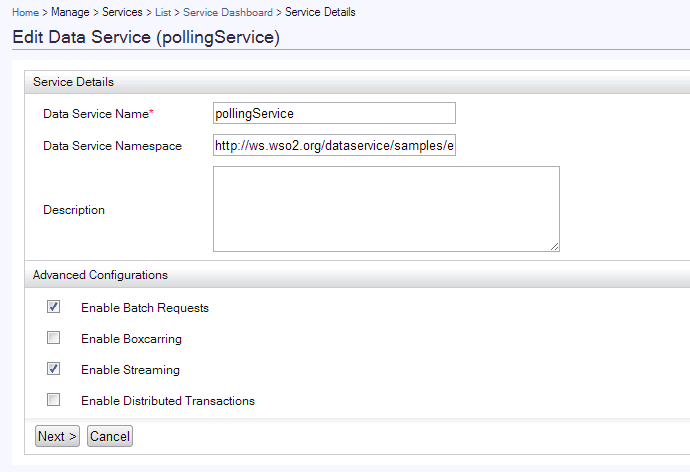 In the next page a data source needs to be created. We will use the sample H2 database that is shipped with the WSO2 DSS distribution. To create a
datasource provide a name for datasource Id, select the database type and provide the database credentials as shown in the figure below. Once the database
is created the connection can be tested through the ‘Test Connection’ button. Database URL and credentials are given below 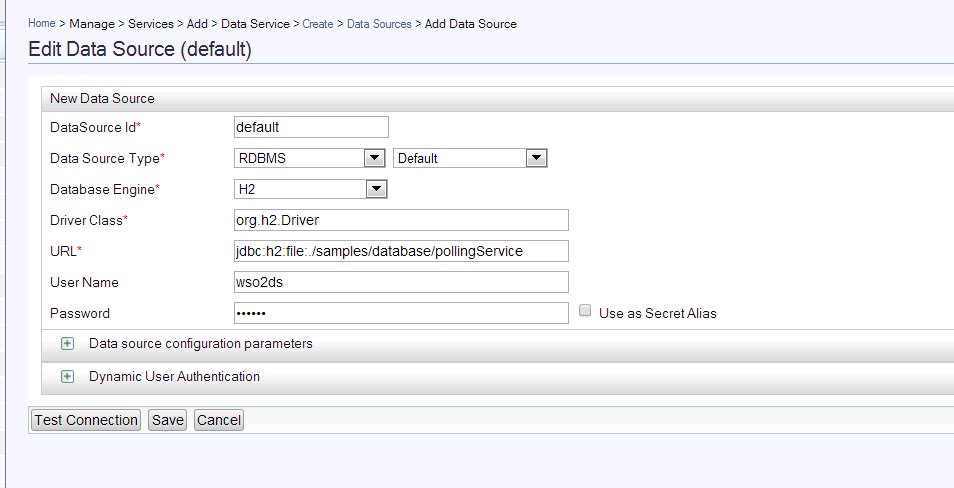 Once the data source is created save and move to the next page, the next page would allow the user to add queries. For this scenario we will need to have
two separate queries. Let’s add the first query.

Click on the ‘Add New Query’ button and you would be redirected to the add query page. Enter an appropriate name for the Query ID field and select the
datasource name which was entered in the previous screen form the datasource drop down menu. Add the SQL statement given below in the SQL textbox indicated
in the figure below. 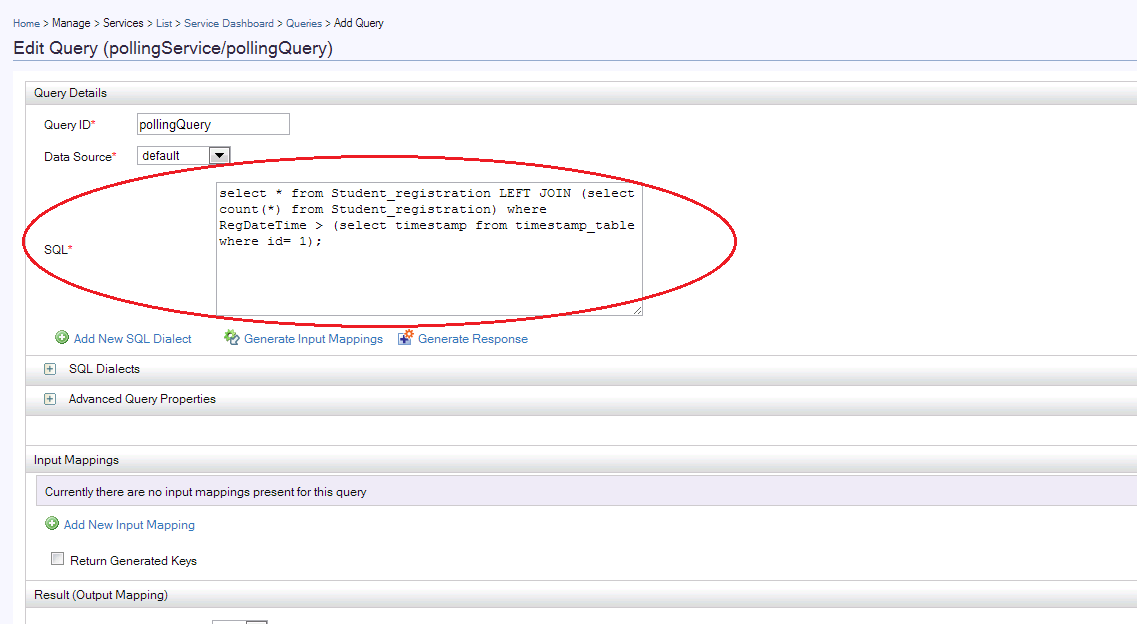 This statement would select all records from the Student_registration table which is updated after the timestamp given in the timestamp table. 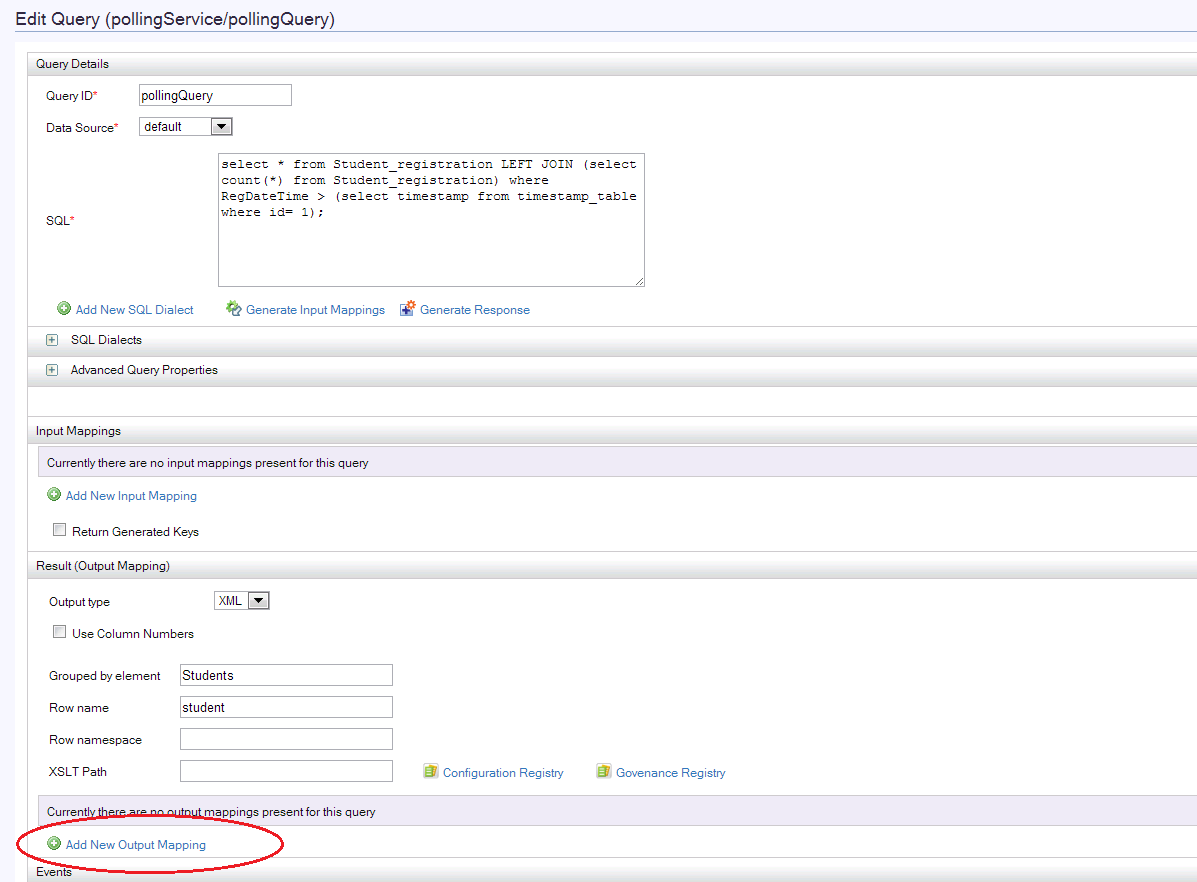 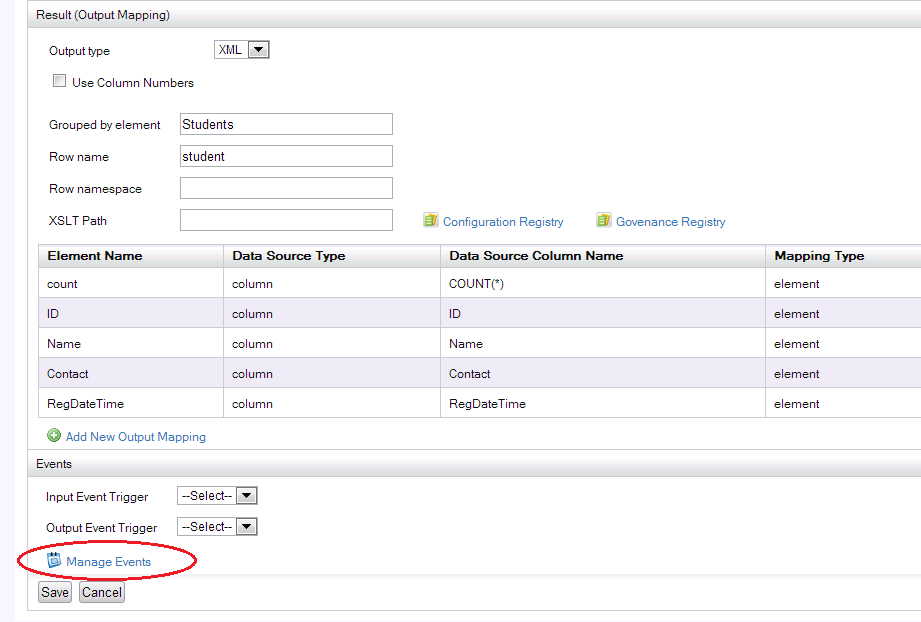 After the event is added click on the ‘main configuration’ button. The polling event added would be available in the ‘Output Event Trigger’ dropdown as
shown below. 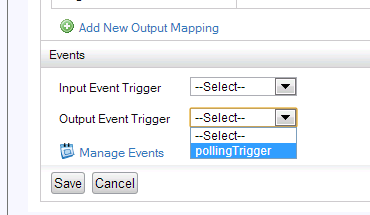 Select the ‘pollingTrigger’ event from the ‘Output Event Trigger’ drop down. Once all the above is done click on the save button. This would create the
query required for polling of data from the database table. Another query is required to be added to update the timestamp once the polling is done. Click
on the ‘Add New Query’

Provide a name for the query and select the datasource from the dropdown menu as we did for the previous query. Add the SQL statement below in the Query
Details section

Once this is done we need to add a new input mapping, this can be done by clicking on the ‘add New input Mapping’ button as shown below 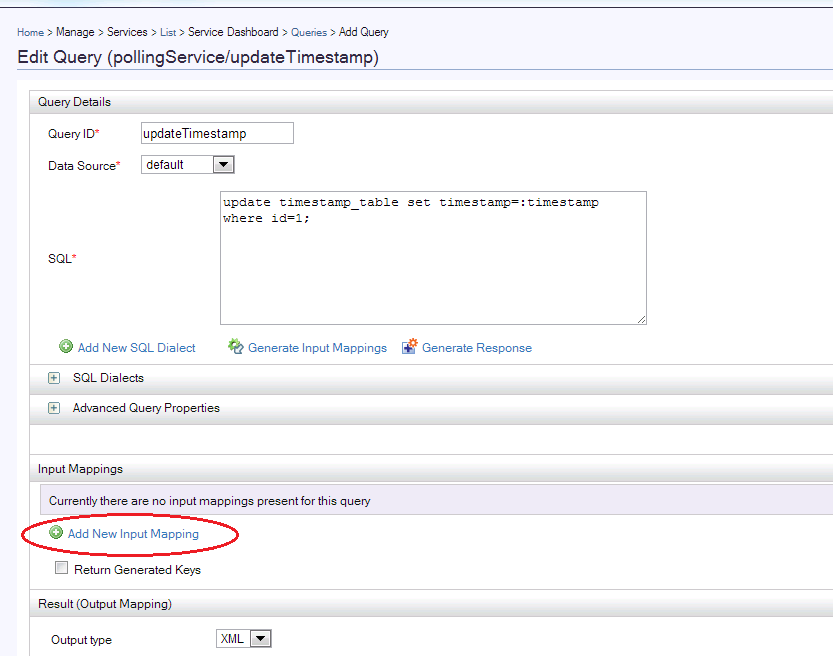 Add the following values, save and return back to the ‘Add Query’ Page

Once this is done the ‘Add Query’ page should look like the following.

If all the above steps are done then click on the save button which would save the second query.

After adding both the queries required click on the next button that would redirect to the Operations page.

Click on the ‘Add New Operation’ button and add the following two operations.

Add the below in the text boxes provided.

Update Timestamp operation would require operation parameters to be added to accept the timestamp parameter passed from the WSO2 ESB. Add the following
values in the textboxes given and the WSO2 DSS would automatically add the relevant parameters for this operation. 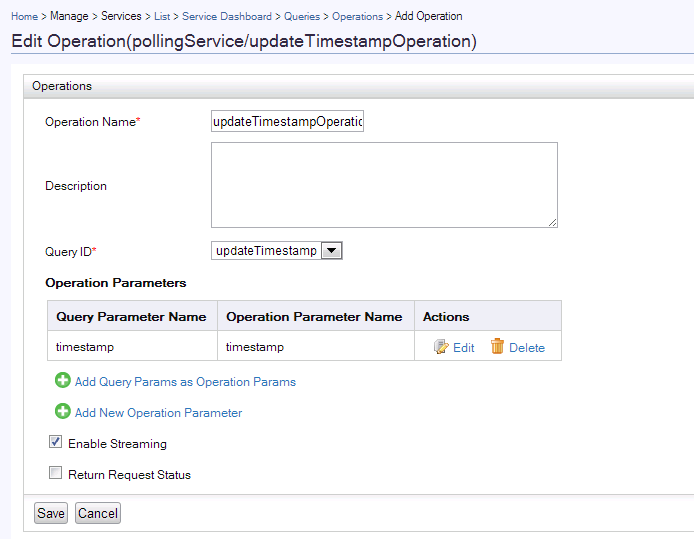 Once both operations are added click on the finish button, this would add the pollingService to the WSO2 DSS.

Setting up the proxy service in the ESB

In Case both the WSO2 ESB and the WSO2 DSS are running on the same machine, the WSO2 ESB has to be started with the port offset of 1. Port offset can be
set in the <ESB_HOME>/repository/conf/carbon.xml file where <ESB_HOME> is the ESB binary distribution folder. Set the offset value as below.

WSO2 ESB would need to have a proxy service that would be exposed to the WSO2 DSS. WSO2 DSS would send a SOAP envelope containing the result-set from the
database poll. The ESB Service would process the result-set and send the latest timestamp back to the WSO2 DSS. WSO2 DSS would in turn update the timestamp
table with the latest timestamp. This process would ensure that the results are polled correctly from the database. The synapse configuration for the WSO2
ESB proxy service is given below. The below synapse configuration would log the results-set passed from the WSO2 DSS and update the timestamp in the
database.

Adding the scheduler for the Polling Service

After creating the Polling Service we can add the scheduler required for this service. This can be done by clicking the ‘Scheduled Task’ link as shown
below. 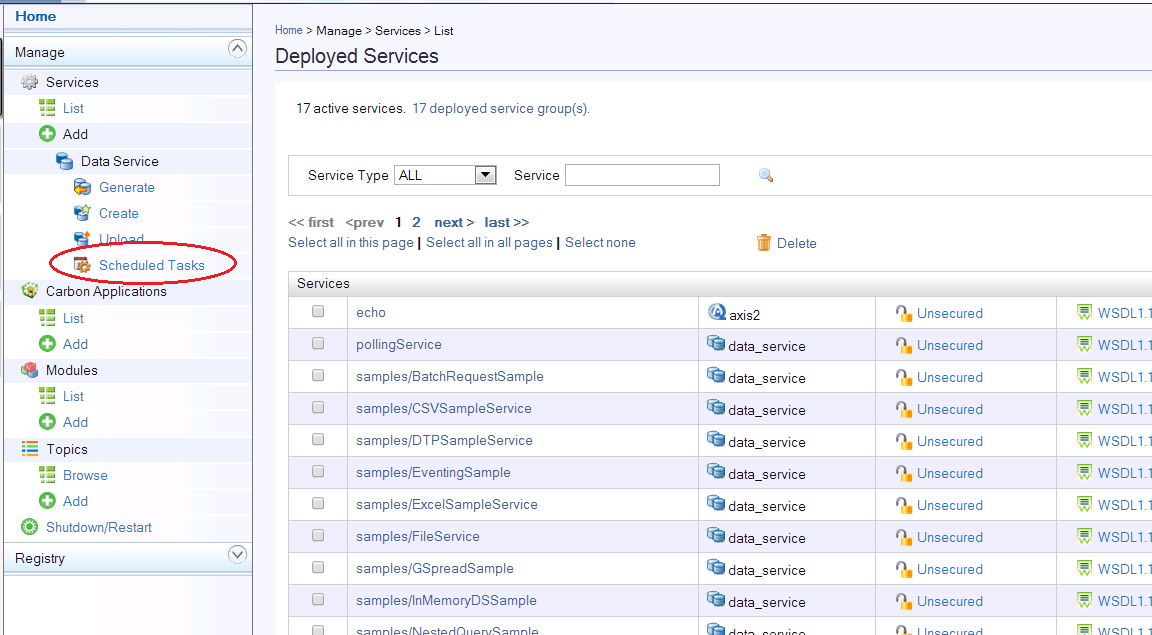 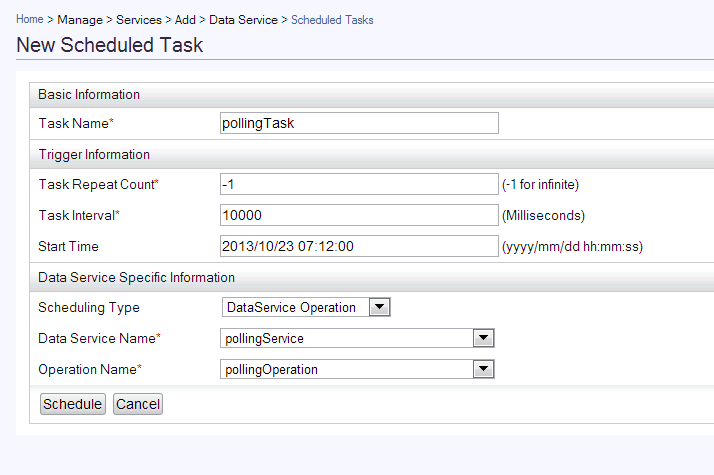 Task has now been scheduled and the database table would be polled based on the parameters in the ‘New Scheduled Task’ page.

· ESB proxy service can be extended to pass the polling result-set to a queue.

· Endpoints are specified inside synapse.xml but it is a best practice to store the endpoints in the Governance Registry of the WSO2 ESB.