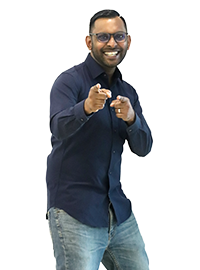 Geethika is the Vice President & General Manager IAM at WSO2.

In his role, he is responsible for the overall operations of WSO2’s IAM business unit with a special focus on its go-to-market and commercial strategies.

Since joining WSO2 in 2011, Geethika has contributed to the company’s revenue growth in a number of sales positions, focusing on the North American market, and most recently headed global sales for the IAM business unit.

Prior to WSO2, he worked as an IT intern attached to the Infrastructure Team in the Business Systems Department (IT) of Unilever Sri Lanka. He was a part of projects involving the release of two mobile solutions developed to automate and digitize the sales forces’ operations.

Geethika has a BSc (First Class Honors) in Information Systems with Business Management from the University of Westminster, UK.

He is a fan of choral music, musical theatre, and wildlife photography. In his free time, he is found writing choral arrangements, directing choirs, performing on stage, or in the wilderness trying to capture pictures of the elusive Sri Lankan Leopard. He is also very passionate about basketball and loves to play a competitive game of ball, anytime, anywhere!