One of the challenges in an API gateway architecture is flowing claims that establish the end user’s identity and the client’s identity at the API provider layer. This is also known as identity propagation. Establishing these identities at this layer is important in order to:

Entitlements are generally established based on a combination of job roles of the users and business policy, privacy, and compliance requirements.

There are two popular security patterns to fulfill the above requirements in a API gateway architecture.

In this post I won’t be going into a detailed analysis of these two patterns, nor will I compare and contrast the two. Instead I will focus on the trusted subsystem pattern which is the more widely implemented security pattern in API gateway architectures among. I will also discuss how it’s implemented in today’s organizations. 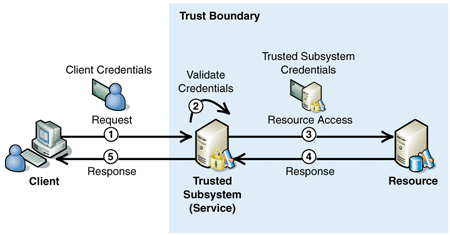 Among many other design goals of the trusted subsystem security pattern, the following are the most important:

In an API gateway architecture, today we see that the following methods are commonly used by the downstream resources to achieve positive identification of the upstream gateway:

In the trusted subsystem security pattern not all claims are asserted by the immediate upstream trusted subsystem. The downstream services may require additional claims asserted by different trusted parties in order to verify and support the genuineness of the flowed claims, allowing these services to securely process the request.

There are 3 categories of propagated identity tokens in a trusted subsystem architecture.

Another approach to flowing identities to the API provider in the trusted subsystem pattern is through identity mapping. Sometimes a service may take a given identity and, by itself or using a trusted third party such as a security token service (STS), map the given identity into another related identity, optionally with the credential to authenticate. The new identity is then used to gain access to downstream resources. This is sometimes required when the downstream resources only recognize the transformed identity. The resulting tokens from the mapping process also can be identified to be one of the propagated identity token types.

Protecting the Integrity and Confidentiality of Claims

It goes without saying, we still find deployments where there is no integrity or confidentiality protection between the API gateway and backend resources.

So far we’ve looked at multiple methods for identification, integrity protection and confidentiality protection. You can combine any of the methods under the different design goals above to implement your API gateway.

One of the key benefits of the self-contained access token pattern is that it reduces the network communication latency by reducing the number of remote calls going over the network from the API gateway to the OAuth2 authorization server. However, if we avoid calling the OAuth2 introspection or OpenID Connect userinfo endpoints, we won't be able to get claims to be sent to the API provider layer.

To avoid this, we need to make sure we encode all the claims necessary for the resources in the self-contained access token at the OAuth2 authorization server while issuing it, and then at the API gateway layer during the API invocation phase we have the following options that are commonly used:

In this article we have taken a closer look at what is identity propagation, its importance in an API gateway architecture, and how it is widely achieved using the trusted subsystem security pattern.

The WSO2 API Manager and WSO2 Identity Server are two open source products, distributed under the Apache 2.0 license, that possess a powerful API gateway component and a security token service component respectively, that give them the ability to support various kinds of trusted subsystem requirements as described in this article.