WSO2 Complex Event Processor (WSO2 CEP) is an enterprise-grade server that integrates with various systems to collect, analyze, and notify meaningful patterns real time. These CEP systems are widely used in areas such as monitoring, financial analysis, and fraud detection. The core back-end runtime engine behind the WSO2 CEP 2.x server is WSO2 Siddhi. This article will take you through the key functionalities of Siddhi and its architecture; the target audience for this article is developers. We hope that the article will help developers to better understand the code, and will help them to fix bugs and also improve Siddhi.

At a very high level, Siddhi receives incoming events in 'Event Streams' via input handlers, processes them, and notifies the output via callbacks. Here, we use the term Event Streams when the events in a particular Event Stream have a definite schema and when they are logically ordered in time.

To process an event stream in Siddhi, we have to first define that stream;
E.g.

When defining streams, we specify its name and its attributes, and each of the attributes is defined as pairs of their name and type in order.
Note: In WSO2 CEP, users are not given the option to explicitly define an event stream, where as in WSO2 CEP 2.x, defining the stream is implicitly done using the input/output mapping of the CEP bucket.

When an event stream is defined, internally, Siddhi creates an input handler, which we can use to send events into the system on the defined event stream. At the same time, we can also add callbacks to event streams, which will receive notifications when events are produced on those event streams.

Here, when events arrive from the incoming event streams, they are filtered and only the success events of the filter will flow to the window. These windows, based on their configuration, sustain some of the incoming events for a certain period of time for further processing, like aggregation calculations. Finally, all these events will be projected on the outgoing event streams based on the defined outgoing stream attributes.

The following is a code snippet demonstrating a simple filter query in Siddhi.

If we want to calculate how many Facebook stocks are traded in the last minute, we can improve the above query by adding a time window.

The architecture of a basic Siddhi query (having Filter, Transform, and Window) is as follows:

Here, the events flow from the 'Input Handler' of the incoming 'Event Stream' to its respective 'Stream Junction'. The Stream Junction is responsible to send the events to all components that are registered to that Event Stream. In Siddhi, we can find two main types of Stream Subscribers; Stream Callback - which is used to notify an event occurrence on a particular stream, and Query Handler Processors - which are responsible for filtering and transforming the events for further processing. Only the event that passes the filter conditions will be outputted from the Query Handler Processor, which will indeed be fed into the Window processor where the events will be stored for time, length or uniqueness-based, or other custom processing. The events are then fed into the Query Projector to perform event attribute level processing such as avg(price), group by and having. Finally, the output of Query Processor will be sent to its registered Query Callback and its output stream's Stream Junction where the event will be fed to all the Queries and Stream Callbacks registered to that Event Stream.

These output streams are implicitly defined by inferring the query, and hence, we don't need to define them explicitly.

In WSO2 CEP 2.x, we use Query Callbacks to notify the output events of the users. 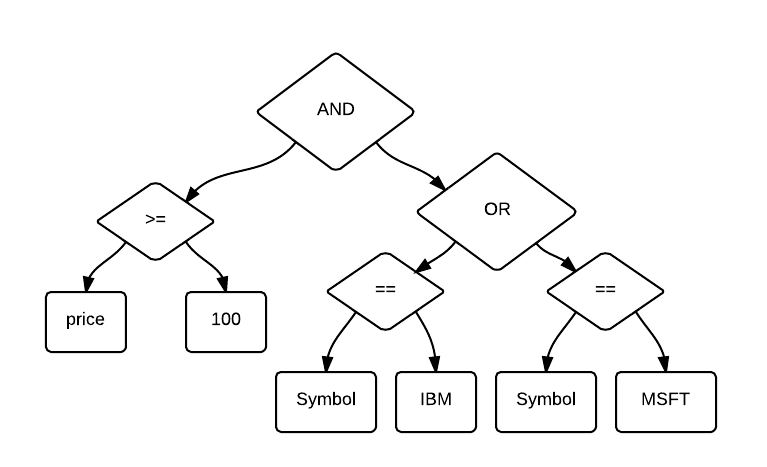 If we look at the conditions in Siddhi, they have the above tree structure, and their execution is based on the Depth First Search Algorithm. To achieve high performance, currently, Siddhi depends on the user to formulate the lease success case in the leftmost side of the condition, thereby increasing the chances of early false detection.

The temporal event processing aspect is achieved through windows. In Siddhi, when an event comes into a 'Window Processor', it will create an appropriate expired event corresponding to the incoming event with the expiring time stamp and store that event in the window. The Window Processor will also forward the incoming event to the 'Query Projector' for further processing. When it comes to the time window, when an expired event is created, Siddhi adds that to the window, and it will also schedule the executor to remove the events from the window when they expire. Here, the executor will continuously monitor and remove the events from the window based on the first-in, first-out approach and also pass the removed expired events to the Query Projector.

The creation of expired events is vital in Siddhi because Siddhi relies on them to calculate the Aggregations at the Query Projector. In Query Projector, the arrived events will be transformed and ordered to create the output events, according to the output Event Stream Definition. During the projection process, Siddhi also carries out Aggregations based on the Event types (in-events and expired-events) where the in-events increase the aggregation and vice-versa with expired-events.

Siddhi supports joining two streams; the following query demonstrates how two queries can be joined based on a condition.

The architecture of Siddhi join query is as follows:

One of the famous queries in CEP is pattern and sequence matching. These are state machine-based implementations. A sample pattern query is as follows:

Here, the potentialFraud event will be fired only if two purchases of the same card are made within one day and if the first purchase is less than $10 and the second one is greater than $10,000.
Here, there can be other purchase events of different cards in between the first and the second events; however, when it comes to sequence query, the events that are matched need to arrive consecutively.

The architecture of pattern and sequence query is as follows: 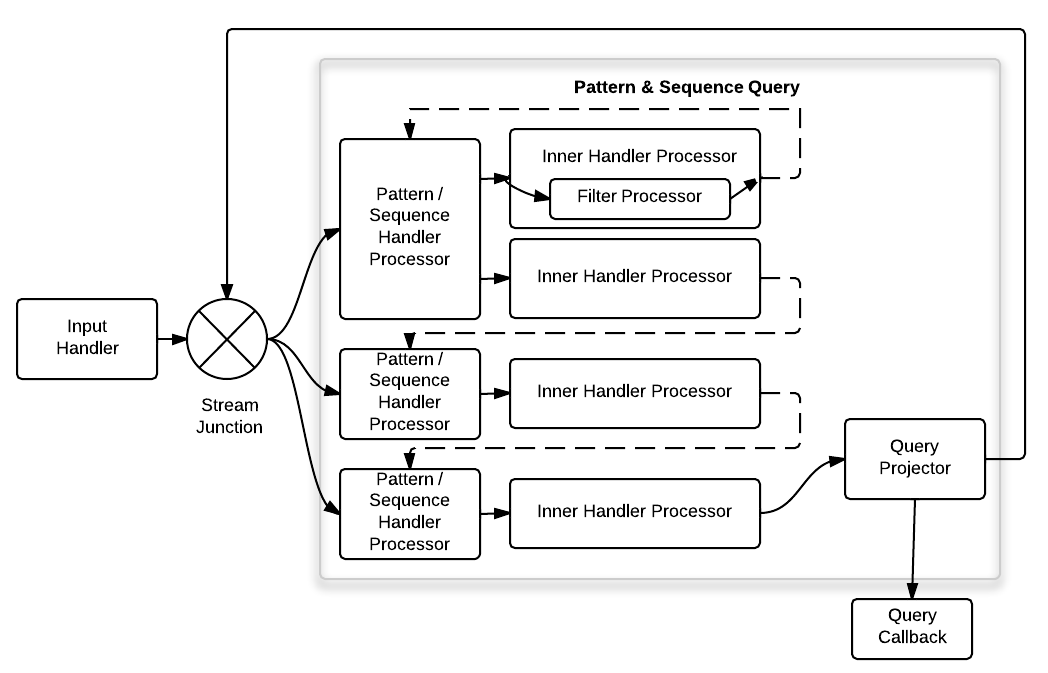 For more information on how pattern and sequence query works refer to the Siddhi Language Docs.