WSO2 ESB is the world’s fastest open source ESB and has been tested with thousands of deployments worldwide with
production use cases of over billions of transactions. The non-blocking HTTP transport of WSO2 which is known as Pass-Through Transport is the key component behind its success.

This series of articles will provide an in-depth analysis of WSO2 ESB’s Pass-Through Transport architecture for any advanced user
who is interested in learning about it in detail.

The main objective of Part II of this article is to give an in-depth knowledge on the Pass-Through Transport
architecture. In addition, this gives a complete overview of the message flow on WSO2 ESB.

WSO2 ESB in a nutshell

The enterprise service bus (ESB) is the heart of any SOA implementation and it is extensively used in most modern
integration use cases. ESB acts as the centralized bus to connect disparate systems, services, and clients. The message
routing, filtering, enriching, transforming, and protocol switching can be considered as key message processing activities
done inside an ESB. In general, we refer to all the message processing capabilities of an ESB as ‘message mediation’ capabilities.

WSO2 ESB offers a very rich set of mediation capabilities along with 100% EIP support. At the same time,
WSO2 ESB is right at the top in all ESB performance comparisons done by WSO2 and other competitors.

The mediation run-time of WSO2 ESB contains several major components that are depicted in the following diagram.

Then the transport listener hands over the message to the Axis2 layer once it is done with the transport level message
processing. In the Axis2 layer, for inbound messages we have something called the message builder. As ESB receives disparate
message formats from different clients and systems, we should use a canonical message format inside the ESB to do all
the message mediation tasks. The main functionality of the message builder is to convert the incoming messages into
a canonical format. (e.g. JSON --> SOAP)

Since we now have a clear understanding about the ESB’s message flow, lets move on to the main discussion points of this
article - the high performance HTTP transports of WSO2 ESB. It's useful to have an idea about the non-blocking
HTTP transport we had prior to introducing the Pass-Through Transport. So, let's begin our discussion with the old NHTTP transport.

When integrating diverse message formats, the NHTTP transport architecture is very useful as it uses a canonical format for each and every request. However, the main drawback is that the canonicalization of every request introduces a huge performance overhead. In particular, this is a major concern when we are routing messages based on URLs and other transport headers without considering the message payload.

The idea is to improve the performance by omitting message building for selected content types. In this model, the incoming message is represented using the meta model; the message context. Although the message context was used in the typical NHTTP based architecture as well (but with binary relay) here we populate message content with the transport header but keep it as a raw byte stream without converting it into the XML-based canonical format. By doing this, we avoid the overhead of converting the input message into XML-canonical format at the receiving side and converting the XML format to raw bytes at the sender side.

The binary relay-based model significantly improves WSO2 ESB's performance, but it had major limitations. When the binary relay is enabled, we cannot support any mediation scenario that requires access to the message payload. Hence, this was only used when the use case is strictly oriented towards header-based mediation. Moreover, this model still uses two buffer architecture and that still involves a critical performance overhead.

The dual buffer architecture has its inherent limitations that severely affects performance in modern performance critical use cases, such as handling billions of transactions per day. The revolutionary step that we took in WSO2 ESB was to come up with a brand new architecture that can overcome all the limitations in dual buffer architecture (i.e. NHTTP transport). The new design, which is know as ‘Pass-Through Transport’ (org.apache.synapse.transport.passthru), was based on a single buffer model in which we have completely eliminated the output buffer. 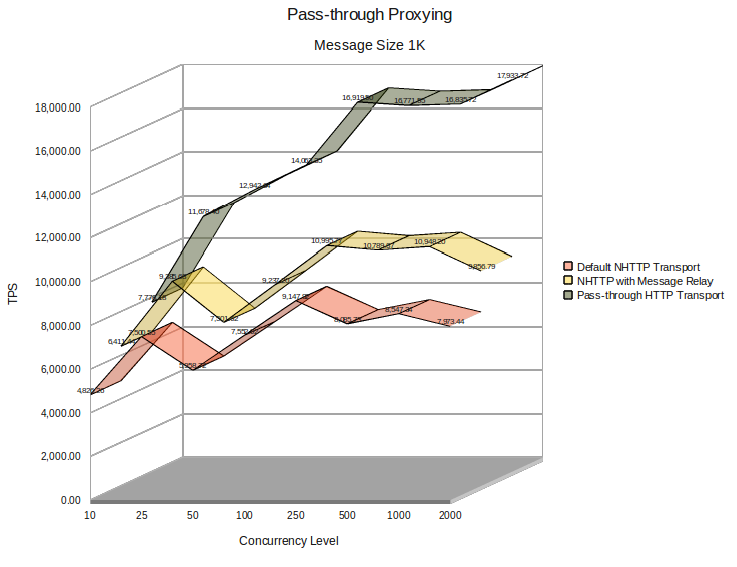 A single shared buffer is used for content decoding and encoding. This model works when we are routing the message without processing/inspecting the message payload. Due to the very same reason we could not make the Pass-Through Transport the default HTTP transport of WSO2 ESB prior to ESB 4.6. Therefore, one of our main challenges was to support Pass-Through Transport in scenarios that do not need to access the message content as well as the scenarios that need to access the message content. The concept of ‘Conditional Canonicalization’ (or content awareness) is used to overcome this problem.

We have leveraged this conditional canonicalization concept so that Pass-Through Transport can be used in all possible integration scenarios. The mediation engine is modified such that it checks for the content-awareness prior to dispatching the message to a given configuration. If we have used any content aware mediators or we have designed the mediation logic such that we need to access the message payload at some point, the scenario becomes content aware. So, in a content aware scenario, we are bringing back the conventional message flow (with message builders/formatter and axiom) right in to the picture. The message flow related to the content aware scenario is also depicted above.