This is the first of a series of articles that will discuss this topic. In this first part, we will explore the different extension points available in WSO2 ESB and discuss two most widely used extension points in detail.


Connect anything to anything 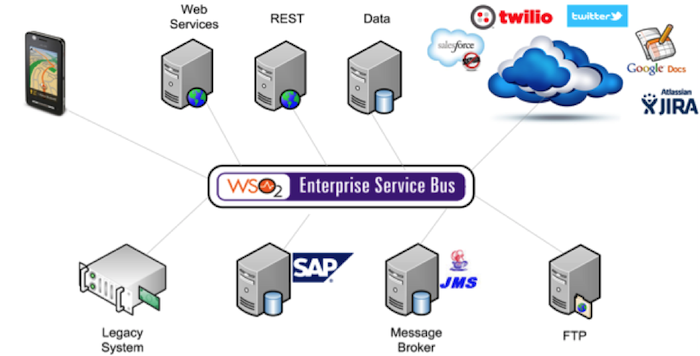 Figure 1 above shows that the WSO2 Enterprise Service Bus (WSO2 ESB) acts as the central hub when integrating heterogeneous systems. WSO2 ESB is connected to systems that communicate in standard protocols like SOAP and REST. It’s also connected to various proprietary systems like SAP and integrated with cloud based solutions like Salesforce, Twitter and Google Docs. Additionally it can be used to connect to different unknown legacy systems as well. In short, WSO2 ESB is capable of connecting anything to anything.

WSO2 ESB has first class support for most standard protocols. It also has various other connectors and adaptors that connect with proprietary systems other cloud based systems. These built-in features cover integration with most systems. However, if the built-in functionality is not sufficient, we can simply extend it to fulfill your requirements.

There are several extension points we can use to extend WSO2 ESB. These include 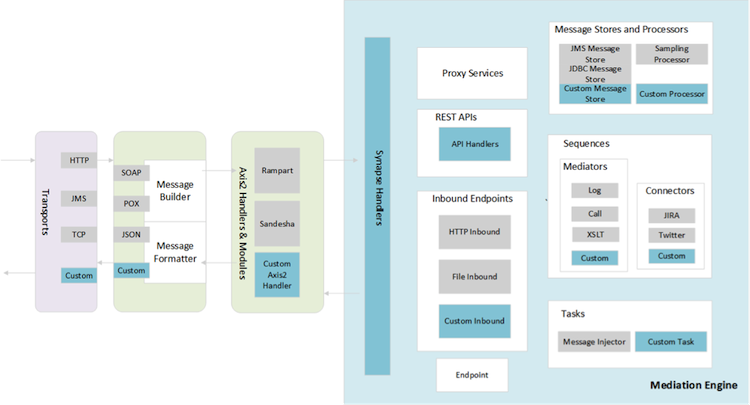 If some functionality is not available in the WSO2 ESB, first thing we need to check is whether we can achieve it using a script. The script mediator can be used to write your mediation logic using a scripting language like Javascript. It internally uses the Apache Bean Scripting Framework [2]. The following languages are mainly supported:

Let’s first look at an example use case of the script mediator.

There can be situations where you need to generate a random number or a UUID (universally unique identifier) and use it within the message flow. These type of simple requirements can be easily achieved by using the script mediator. Following is a sample sequence that contains a script mediator. Here, the script is placed inline and is written in Javascript.

As you can see above, the randomly generated number is assigned to a property called ‘CONTEXT_ID’.

For troubleshooting and debugging purposes sometimes we need to introduce some latency at the WSO2 ESB message flow. To do that we can use a similar script to the one shown below. It’s a sequence that contains a script mediator with a script to change the status of the thread to sleep for five seconds.

As you know, the script mediator needs a script to define the logic. There are two ways of specifying the script:

When you embed the script into the synapse configuration, you have to define the logic in-line. This is suitable for very small scripts. When you have complex scripts, the better approach is to store it in a file and refer to it from the configuration. When the script is stored as an external file, it needs to be written as a function. You can then simply call that function from the script mediator. If the same function of the script needs to called from multiple places, you have to store it in a separate file to avoid duplication. There are two ways to store the script file:

WSO2 ESB provides a set of built-in functions that you can call from the script you’re writing. You get access to the predefined variable “mc”, which is a reference to the MessageContext in the mediation flow. More precisely, you get access to the ScriptMessageContext, which is an implementation of the MessageContext. You can call the built-in functions and manipulate the mediation flow with the “mc” variable. The table below shows some important functions:

For more functions you can refer to WSO2 ESB’s documentation [3].

The script mediator uses Mozilla Rhino as the scripting engine for Javascript. Rhino provides the functionality to write Java code within Javascript. Scripting in Java has many use cases. It allows you to use different Java libraries to compose powerful scripts.

We need to define the fully qualified class name to access a Java class. But if the script contains access to lot of different classes of a package, it’s not suitable to use the fully qualified class name all the time. In that case we can import the entire package to the script. There is a top level function called ‘importPackage’ which is equivalent to the import function in java.

There are two ways you can create a class mediator:

It is recommended to take the second approach as AbstractMediator provides all the common functionalities you need. To create a class mediator with the required project structure you can use WSO2 Developer Studio.

A mediator project can be created using WSO2 Developer Studio as shown in figure 3 and 4 below: 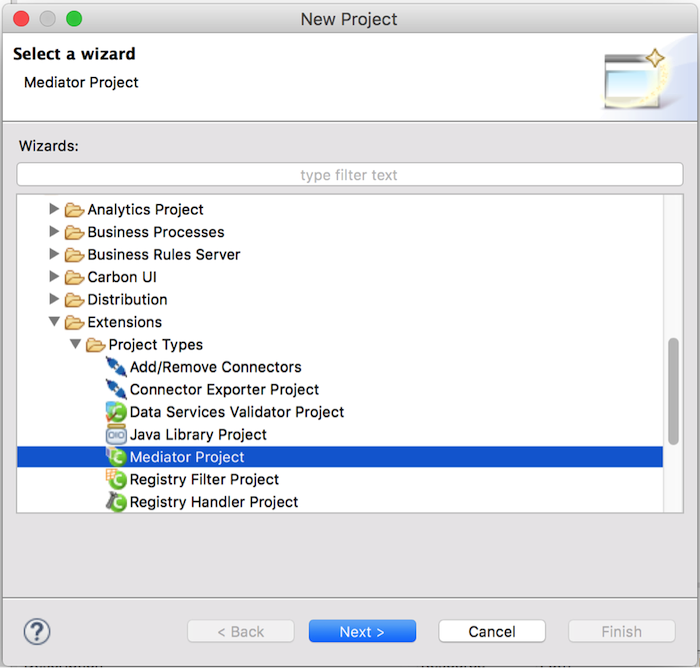 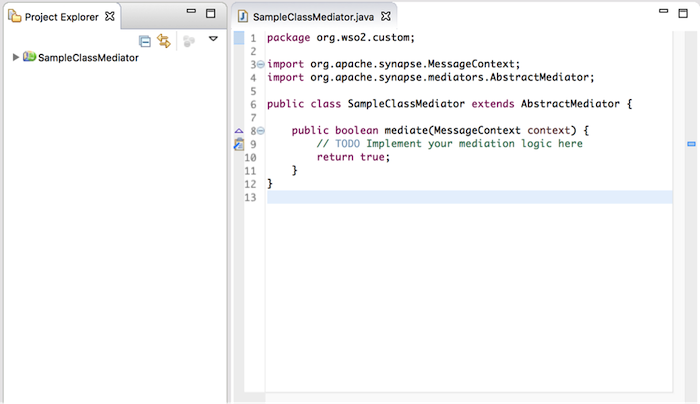 A mediator can be deployed into WSO2 ESB in several ways.


Engaging the mediator to the message flow

To engage the custom class mediator into the message flow, we can use the built-in mediator called Class Mediator. Following is a sample configuration:

Here, the name should be the full qualified class name of the mediator class.

Apache Axiom is the library which is used as the XML Infoset compliant object model implementation in WSO2 ESB. Since Axiom is heavily used, we need to have a fair understanding of Axiom API in order to do advanced actions with the class mediators. For example, the SOAPEnvelope which we used to represent the message payload belongs to the Axiom. So to perform message manipulation we need to have some understanding of Axiom API.

In the mediator code, we need to define variables for these properties and have getters and setters for those variables. Following is a sample mediator implementation.

To invoke fault sequence for the errors, we need to throw a SynapseException from the class mediator whenever required. Also, to make things easier when it comes to debugging and identifying issues, we need to set the following properties which describes the occurred error.

Note: As a best practice we usually log these properties at the fault sequence.

To make the mediator content-unaware, we need to override the method isContentAware in the AbstractMediator as follows.

The mediate() method gets invoked when it receives a request. There can be situations where we need to execute some tasks (like initialize parameters, establish connections with systems, etc.) prior to receiving the requests. For that we can engage a lifecycle to the mediator. Basically we need to implement the ManagedLifecycle Interface. Following is a sample configuration.

Here we can write our initialization logic int the init() method.

WSO2 ESB is capable of handling thousands of connections simultaneously. To handle a large amount of concurrent requests, built-in mediators and other features of WSO2 ESB is designed carefully following the best practices in concurrent programming. So when we develop a custom mediator, it is required to write the code without breaking the fundamental principles.


A custom mediator with a serializer and factory

The custom mediator type that we discussed above, is engaged to the message flow through the built-in mediator called class mediator and we can only pass configuration parameters using properties. In this method the language syntax is not that rich. But there is a way that you can implement your mediator with your own syntax. In order to do that you need to write a mediator with a serializer and a factory. However because of the maintainability concerns and lack of support in WSO2 Developer Studio, this way of implementing a mediator is not recommended.

For further information about this approach you can refer to [5].

Extending the functionality of WSO2 ESB can be vital when it comes to building a complete integration solution for your enterprise. In this article we discussed how we can extend the functionality of WSO2 ESB using different extension points that are available. We specifically discusses class and script mediators in detail. In the next article we will discuss the rest of the extension points.