As opposed to the previous identity server versions, there is just one servlet which will handle requests from the various types of authentication protocols: the “identity” servlet running on the context “identity”. If we consider a typical authentication scenario, when a certain request reaches this servlet, the authentication framework will engage the appropriate inbound authenticator based on its logic, i.e. whether or not a certain processor is able to handle this request. This authenticator will be responsible for handling all the protocol-specific tasks (such as validation), as well as for converting the request to a common format so that it can be passed on to the framework.

The anatomy of an inbound authenticator

As explained above, an inbound authenticator is responsible for performing the following tasks:

This flow can be illustrated in a sequence diagram as follows: 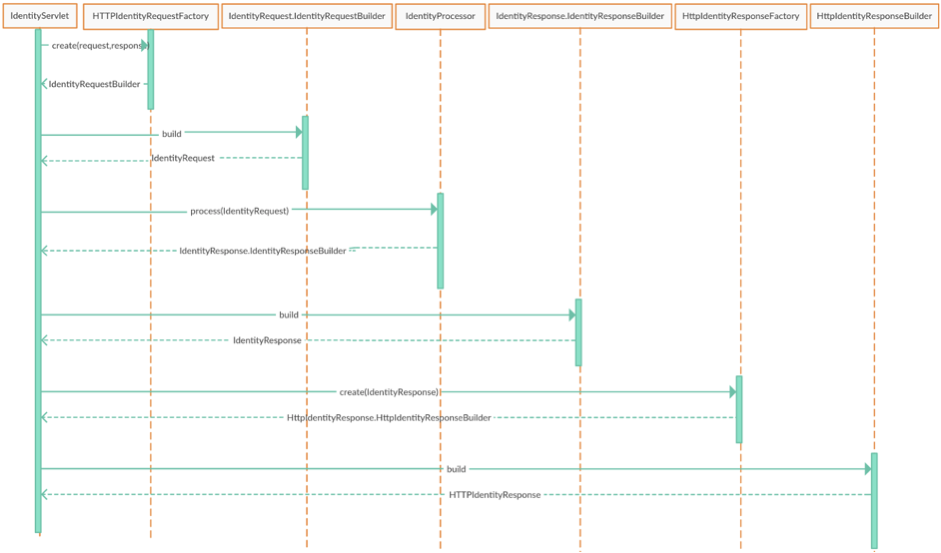 An explanation of each of the above major components is as follows:

This is the servlet provided by the Identity Server to which authentication requests are sent by the calling party. The servlet is part of the authentication framework, hence it is not protocol-aware. It will pass on requests it has intercepted to a suitable inbound authenticator based on its canHandle() logic (see below).

Takes in a servlet request from the /identity servlet and provides a builder to an IdentityRequest instance (or an instance of a subclass of IdentityRequest) as the output. Contains a canHandle() method inherited from the parent class which dictates whether or not a certain servlet request can be handled by this particular class. This method has to be implemented by the developer designing the custom inbound authenticator.

This class is responsible for doing the actual processing of the onbound auth request. It does this by validating the IdentityRequest and passing it on to the authentication framework for validation. Its main functionality, which is carried out in the process() method (inherited from the IdentityProcessor superclass), can be summarised as follows:

In the in-flow (a fresh IdentityRequest coming from the /identity servlet):

In the out-flow (returning a processed response from the authentication framework, which was sent to the /identity servlet as described in the above case)

This class is responsible for performing a similar task to the IdentityRequestBuilder, where it builds and returns either

This class does the opposite of the HTTPIdentityRequestFactory; it builds a HTTP response factory instance based on the common IdentityRequest format used by the authentication framework. Here, the HTTP response is specific to the protocol in use (for example, a SAML HTTP response will contain headers and fields as per the SAML spec).

The diagram below illustrates the overall flow, starting from the authentication request issued from the external Service Provider: 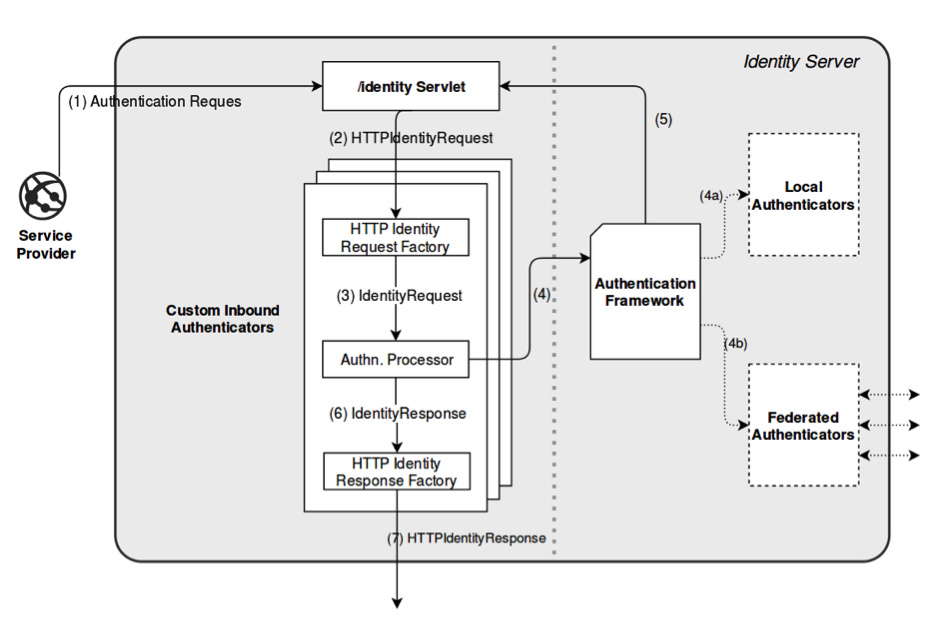 A point to note here is that it is possible to specify custom properties for the given protocol at this stage, and they can be picked up in the code-level later. An example would be setting a redirect URL in the SP configuration for a custom inbound authenticator and later retrieving this property and setting it in the HTTP response. In order to do this, the properties needed should be added to the property map in the subclass of AbstractInboundAuthenticatorConfig.

The UI elements for the authenticator in the SP configuration are populated through the properties passed to the getConfigurationProperties() method in the implemented subclass of AbstractInboundAuthenticatorConfig, which will also need to be incorporated in the custom inbound authenticator code. This class offers certain standard methods to be overridden, such as the name, friendly name. The ID of the relying party element, which is also specified here, is very important because it uniquely identifies the SP among all other SPs.

An inbound authenticator must override a method called getRelyingPartyId() in the processor class - this method will point to a unique ID to identify the authentication protocol the processor handles. For example, in the SAML inbound authenticator, the field “issuer” is set as the relying party ID. Hence, when we specify the ID of the relying party element in the SP configuration (again, this is “issuer” in the SAML SP-side configuration), this match is used to pick that particular SP configuration among others for a given authentication request for a protocol. This can be illustrated in a simplified manner as follows:

In order to illustrate the concepts discussed, let us consider a simple example (the code of which is hosted at [3]) where the authentication protocol that is to be handled by the sample authenticator contains a set of predefined input parameters that come part of the request. Namely, the canHandle() method of the HTTP request builder will return true of a certain parameter ‘customAuthRequest’ is found in the request. Quite simply, this is the same as a SAML request being validated.

In the process() method of the request processor, the first operation is checking if the calling party is the identity servlet (i.e. a new request) or the authentication framework (i.e. the result of the processing step). This is achieved by checking if a session ID (which is generated by the framework as part of the authentication step) exists. If it does, the flow is treated as one coming from the framework and the parameters (e.g. redirect URL) picked up from the request are set to the response and then passed to the IdentityResponse builder. On the other hand, if it does not exist, then the incoming IdentityRequest is passed on to the framework. This session ID can be used to retrieve the message context so that properties set in the entry phase can be extracted for use in the exit phase if desired.

On the response path, the IdentityResponse generated by the Framework is then built and then converted into an HTTP response which could also be customised as desired.

The sample inbound authentication use-case could be demonstrated through the sample webapp hosted at [3]. The steps for this are as follows:

Gokul is a Senior Software Engineer at WSO2. He was previously an intern at WSO2 where he contributed to the JavaScript AppDev effort, which eventually became a part of Jaggery.js. A BSc Engineering graduate specializing in Computer Science and Engineering from University of Moratuwa, Sri Lanka, Gokul has also completed the BCS HEQ examinations and is an associate member of the British Computer Society. Gokul’s interests include open-source software development, mobile computing, and the Android OS.