Securing Communication Between Devices and the IoT Platform

As the Internet of Things (IoT) is becoming a hot topic across many industries, more and more devices entering the market are connected and shared among many users. In this rapidly growing space, thousands and millions of things are being connected. Therefore, it is easy to lose sight of the security aspect of the devices that are getting connected. With emerging DDoS attacks on IoT botnets, it is important that organizations chose IoT solutions that have proper identity and security functionality. Let's take a look at how WSO2 IoT Server, an open source IoT platform addresses security requirements of things in this connected world.

IoT server provides a complete set of REST APIs to successfully manage devices and the device manufacturers can write their own device types and plugin these device types to IoT server in order to manage those devices. The devices will communicate with the IoT server to get themselves enrolled onto the server and once they are enrolled, they can be managed by the administrators securely. Devices may push sensor data to the server as and when events happen and the analytic capabilities of the server allow these data to be transformed to useful business information. The server may issue commands or rules to be obeyed by the devices and the devices will adhere to these sent by the IoT server.

For all these communication to happen, there must be an entity in the device that knows how to contact the server, enroll with it, send the devices sensor data and process any command sent by the server. This is handled by the IoT agents that is installed on to the devices. Based on the device platform the agent can be written in any appropriate programming language and the agent will consume the device management APIs exposed by the IoT server. Let's take a closer look at different types of communication that happens in the IoT server,

All communication that happens in WSO2 IoT Server can be broken down into two main areas as illustrated in Figure 1:

The WSO2 IoT server, communicates with external systems such as LDAPs or databases when necessary and this communication is done securely. However, the focus of this article is to discuss the security mechanisms that are available to protect communication between the device and the server. Therefore let's take a look at how WSO2 IoT server handles the device-server communication and does it in a secure way.

At the heart of IoT lies the connectivity and connectedness of devices or things with an IoT platform. Devices connect to WSO2 IoT Server to pump new events that happen in real time or to check for operations and policies that need to be carried out on the device.

Today, resources are increasingly exposed as APIs and with the rise of these APIs, attempts to steal corporate data and misuse resources are increasing. In the world of IoT, these devices need to communicate constantly or periodically with the server and these connections are typically made through public networks with the use of protocols, such as MQTT, HTTP, or XMPP. Regardless of the communication method, they must be secured with an extra layer of security to protect the corporate data being stolen.

Since the device to server communication happens over a public network, it is vital to protect the channel that is used to transmit the data. To make sure the channel is secure, it is important to use SSL/TLS between the device and the server and ensure only the intended parties can read the messages being transmitted. Other than this fundamental protection at the transport layer, it is important that the server and the device identify and validate each other to ensure that only the authorized devices/users are accessing the protected resources. This is where proper authentication comes into play. In this article we will look at two forms of authentication:

A token can be thought of as a string created by an authentication server that can be used to identify the device and its right to access a protected resource. Typically, in this flow, the device may send some secret credential, which will be identified by the server and after validating the credentials the device may be given a token that can be used to access protected resources. One such industry standard protocol is OAuth.

When accessing protected resources, it is important to authorize the devices making the request. OAuth facilitates this exact requirement. Another important feature of OAuth is its simple design that allows low-powered IoT devices to authenticate and authorize using minimum processing power and resources. WSO2 IoT Server leverages OAuth capabilities of WSO2 API Manager to protect backend APIs that the devices use to communicate. Some devices that are managed by the IoT Server relies on OAuth for securely communicating with the backend. The WSO2 IoT Server is capable of managing Android devices out of the box and this is done with an agent called the device management agent. This agent will receive commands to be executed on the device from the IoT Server. Another form of device monitoring is done by using an agent called the Android sense agent that monitors the sensors of the Android devices and reports these values to the IoT Server so they can be analyzed and perform any operations on the device. In both these agents, it is vital to protect the communication between the device and the server as they contain corporate data that must be kept secure. This is where OAuth comes to the rescue. Let's take a look at how Android devices securely communicate with the IoT Server with the use of OAuth as described in Figure 2. 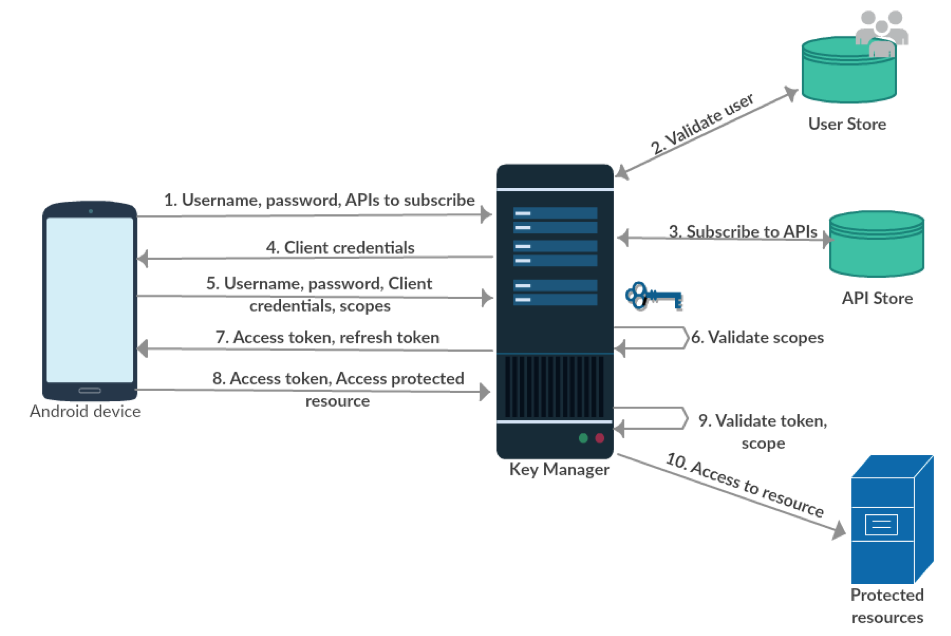 WSO2 IoT Server leverages API throttling capabilities of WSO2 API Manager, which allows you to define the rate at which a device can access a resource, reducing the risk of DoS attacks. With OAuth and together with scope (permission) validations, the devices are identified and authorized in a very secure manner.

SCEP is also supported in WSO2 IoT Server and, as a result, certificate-based authentication is facilitated. Platforms, such as iOS, actively rely on SCEP capabilities in WSO2 IoT Server to enroll and authenticate. Let's take a look at how SCEP works and how SCEP is implemented in IoT Server, especially in the case of iOS device management. SCEP came into existence to solve the issue of scalably delivering device specific certificates to network devices such as routers. The end goal of the protocol is to deliver a device specific certificate to a device that can be used to authenticate and authorize a user. Let's take a look at the flow of SCEP communication to get a better understanding (Figure 3).

It's important to note that since SCEP is considered an unauthenticated protocol, no other authentication takes place at the time a certificate is signed,. To overcome this issue, an added layer of security is provided where when a CSR is submitted, the user credentials are first passed to the server and validated. The server will first validate if the user credentials are valid, and if so, the certificate is signed and issued. To track down the request and certificate issued a challenge token will also be associated with the certificate, which will be validated when the requests are sent.

Other than OAuth and SCEP, WSO2 IoT Server supports basic authentication and mutual TLS authentication out of the box too. Due to the extensible nature of the authentication logic, it is possible for organizations to build there own authentication scheme to secure communication with the server.

How To Plugin Your Own Authentication Scheme?

Any request that is made by a device to the IoT Server backend, first goes through the API gateway. In the API gateway, there are multiple handlers [5] that perform different tasks and these handlers are engaged one by one sequentially as the request flow through. One of these handlers is the APIAuthenticationHandler handler that performs the OAuth authentication under default message flow. After writing a custom handler, we will need to replace the APIAuthenticationHandler with our custom handler so that our authentication logic happen prior to other core API management tasks, such as API throttling and usage statistics collection. Figure 4 illustrates the flow between handlers prior to after the custom handler is engaged. 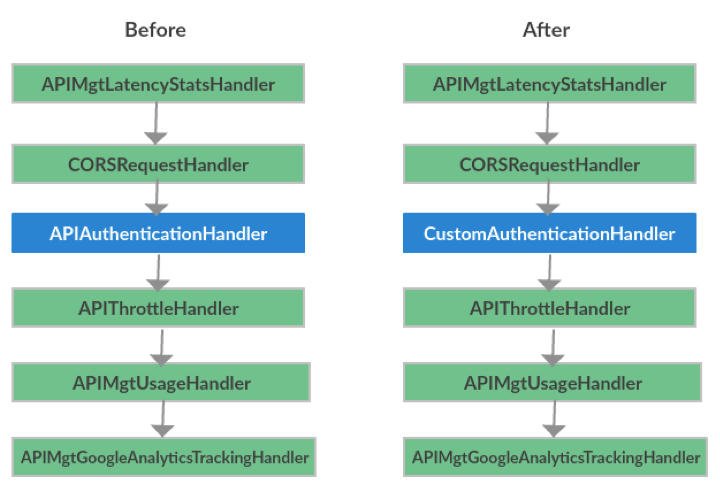 Now that we are aware of how the messages flow between handlers, let's see how the entire flow looks like, for example, when validating a custom header to authenticate a device (Figure 5). 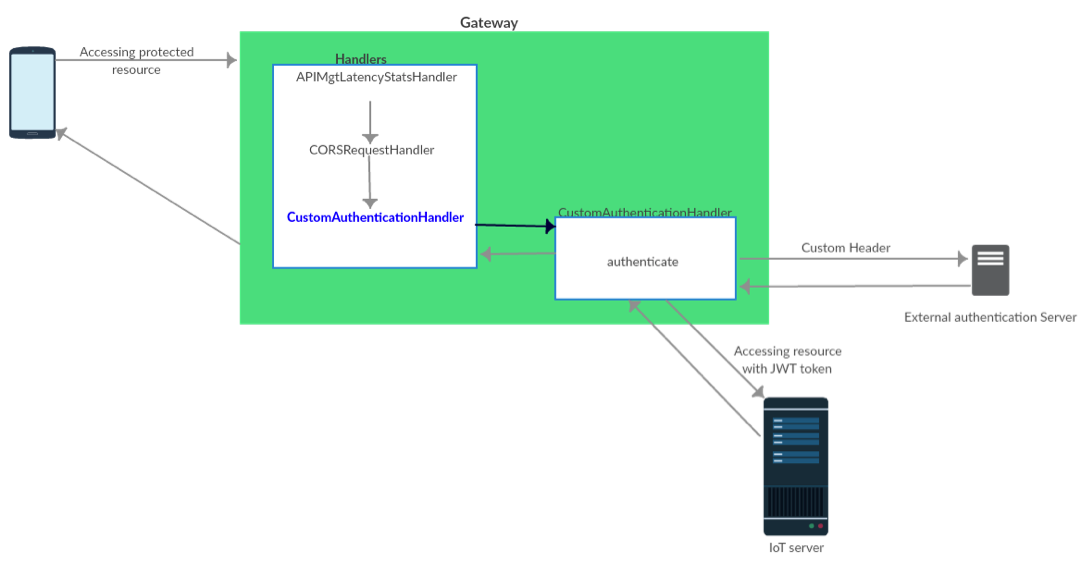 You can find a sample implementation of a custom authentication handler here [4]. Let’s go through this sample by following the above steps to understand the code more clearly. Note that in this project, our custom handler logic is written in the CustomAuthenticationHandler class and its package name is org.wso2.carbon.authenticator.

After extracting the necessary details from the request, you can authenticate the details sent as you wish.

How To Support Multi Factor Authentication?

We can also achieve multi-factor authentication through a custom authentication handler as mentioned previously. Here, the client initially sends the first set of credentials to validate and after authenticating the user. Therefore, the custom logic can be written to generate and store the one time token. The token is passed through a device, such as an SMS gateway, where it delivers the token to the device. The device can then forward this token back to the server and the custom handler validates the token against its stored value. Due to the extensible nature of the authentication mechanism, it is possible for you to implement a custom logic and link with any external system as you wish.

To summarize the discussion, it’s evident that WSO2 IoT Server has powerful out-of-the box mechanisms on IoT security to protect end-to-end communication and also allows organizations to customize their capabilities through the provided extension points. These capabilities allow organizations to have a very secure and scalable IoT infrastructure in this rapidly growing industry.