WSO2 API Microgateway is a lightweight, developer centric, decentralized, cloud native gateway designed for microservices architecture. As the world is rapidly moving towards microservices, lightweight gateways designed for microservices are becoming more and more popular. This is because microgateways are the key to exposing all microservices as APIs to the outside world and as internal services. What sets microgateways apart is the fact they can be exposed as the client facing ingress gateway to handle North-South traffic and they can be attached as a sidecar to the services to handle the East-West traffic as well.

WSO2 API Microgateway 3.1, the latest version of this product, is enriched with more features to solve your organization’s problems when implementing a microservices architecture.

WSO2 Microgateway 3.1 has a set of features that enables users to explore more areas in a microservices architecture.

gRPC is a client initiated communication mechanism on top of http2, where clients call a service on a remote server as if calling a local method on the client side. It defines the Interface Definition Language (IDL) and the underlying message interchange format using protocol buffers. On the server side, it implements the interface and exposes it as a service; on the client side, it uses a stub that maps the client side method calls to the underlying message format expected by the server. gRPC has become very popular lately and most microservices are implemented as gRPC services. This is to inherit the advantages of http2 protocol which gRPC uses.

WSO2 Microgateway defines a specific set of proto buf extensions which can be used to enforce the authentication, authorization, and rate limiting for the APIs. Developers can modify the proto buf of the microservice to include additional extensions and include the modified proto buf in the microgateway project which can be later exposed via the microgateway. OAuth2 (opaque and self-contained JWTs), API key, and basic Authentication are the supported security schemes(wso2.security extension) for gRPC APIs. Furthermore, fine-grained authorization can be achieved by specifying the scopes (wso2.scopes extension) for respective gPRC methods in the proto buf. The gRPC method level and service level rate limiting can be specified using wso2.method_throttling_tier and wso2.throttling_tier extensions respectively. 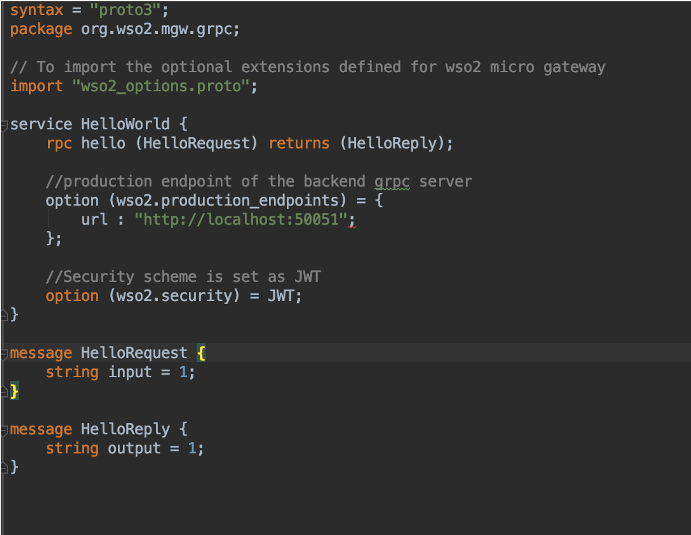 Metrics keep track of several important aspects of an application such as latency, resource saturation, traffic, and errors. Metrics help to identify issues that can prevent a production failure and isolate the component of a system that causes issues. In this new release, microgateway by default supports metrics with prometheus and visualizing using grafana. These dashboards help you to identify the latency breakdown of each request, error rates, HTTP status code summary, CPU and memory usages of the gateway, etc.

Tracing allows you to track a complete request flow through many different interconnecting components. Once an issue has been identified with metrics, tracing provides insights to isolate the component and of a system that is causing issues. The microgateway registers a set of spans that are defined according to open tracing standards which break down the request flow through the microgateway during different phases such as authentication, authorization, throttling, backend service, responding to the client, etc.

The microgateway uses Ballerina Central as the policy hub which is a collection of sharable policies. Developers can develop different transformation policies in the Ballerina language and push them to Ballerina Central with meaningful tags. Other developers can search for and reuse the same policies directly for their APIs using the “x-wso2-request-interceptor” or “x-wo2-response-interceptor” extension in their open API definitions. For example, JSON to XML conversion is defined as a very common message transformation scenario. These requirements can be achieved via available interceptors in Ballerina Central. 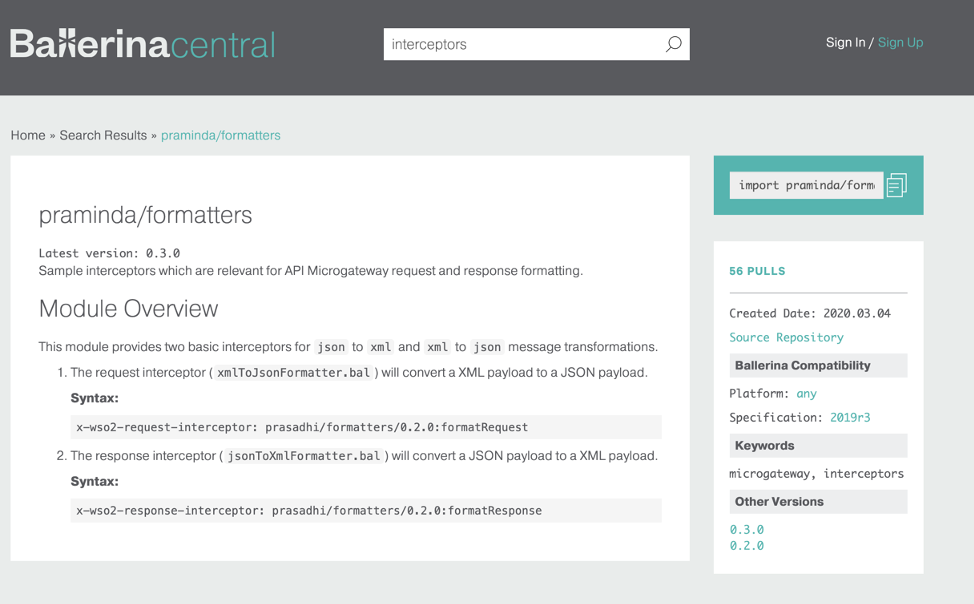 Earlier versions of WSO2 Microgateway only supported message transformation and mediations using the Ballerina language. The latest release is enabled to support interceptors written in java as well. Developers have the flexibility to implement an interface with a set of helper methods to manipulate a request and response to achieve custom behaviors.

Internal APIs and applications accessing restricted APIs may not need stricter security mechanisms like Oauth2. For such APIs, the concept of an API key can be used to provide access to the API. WSO2 Microgateway 3.1 provides out-of-the-box support for API keys. The microgateway also acts as an API key issuer as well by issuing JWT type API keys that can be used to invoke APIs which are protected with API keys. The microgateway’s API security portfolio now consists of full stack OAuth2.0 support, Mutual TLS, Basic Authentication, API Key, and other protocols available as policies.

Apart from the above features, this release contains many improvements like supporting open API definitions without wso2 specific extensions, template the context or base path of APIs, simplified docker image creation during project build and performance improvements.

Explore WSO2 API Microgateway 3.1 For Yourself

WSO2 API Microgateway 3.1 comes with the EULA3 license and you can download it for free. Visit our website to download the latest version. You can also join our Slack channel and speak to API management experts at WSO2.