The autoscaling component comprises of the synapse mediators AutoscaleInMediator and AutoscaleOutMediator and a Synapse Task ServiceRequestsInFlightEC2Autoscaler that functions as the load analyzer task. A system can scale up based on several factors, and hence autoscaling algorithms can easily be written considering the nature of the system. For example, Amazon's Auto Scaler API provides options to scale the system with the system properties such as Load (the timed average of the system load), CPUUtilization (utilization of the cpu at the given instance), or Latency (delay or latency in serving the service requests).

The autoscaling configurations are defined from CARBON_HOME/repository/deployment/server/synapse-configs/tasks/autoscaler.xml

In WSO2 Load Balancer, the autoscaling algorithm to be used is defined as a Task. ServiceRequestsInFlightEC2Autoscaler is the default class that is used for the autoscaler task.

This property points to the file loadbalancer.xml for further autoscaler configuration.

3) Trigger Interval
The autoscaling task is triggered based on the trigger interval that is defined in the autoscaler.xml. This is given in seconds.

ServiceRequestsInFlightEC2Autoscaler implements the execute() of the Synapse Task interface. Here it calls sanityCheck() that does the sanity check and autoscale() that handles the autoscaling.

autoscaleIn mediator is defined as an in mediator. It gets the configurations from loadbalancer.xml, which is the single file that should be configured for autoscaling, once you have already got a system that is set up for load balancing.

Similarly autoscaleOut mediator is defined as an out mediator.

1) Properties common for all the instances

The property 'ec2AccessKey' is used to provide the EC2 Access Key of the instance.

The certificate is defined by the properties 'ec2PrivateKey'.

The ssh key pair is defined by 'sshKey'.

'instanceMgtEPR' is the end point reference of the web service that is called for the management of the instances.

The 'disableApiTermination' property is set to true by default, and is recommended to leave as it is. This prevents terminating the instances via the AWS API calls.

The 'enableMonitoring' property can be turned on, if it is preferred to monitor the instances.

These are defined under

The property, 'instances' defines the number of the load balancer instances. Multiple load balancers are used to prevent the single point of failure -  by providing a primary and a secondary load balancer.

In a public cloud, elastic IPs are public (IPV4) internet addresses, which is a scarce resource. Hence it is recommended to use the elastic IPs only to the load balancer instances that to be exposed to the public, and all the services that are communicated private should be associated to private IP addresses for an efficient use of this resource. Amazon EC2 provides 5 IP addresses by default for each customer, which of course can be increased by sending a request to increase elastic IP address limit.

This defines in which availability zone the spawned instances should be.

payload.zip contains the necessary files such as the public and private keys, certificates, and the launch-params (file with the launch parameters) to download and start a load balancer instance in the spawned instances.

The launch-params includes the details for the newly spawned instances to function as the other instances. More information on this can be found from the EC2 documentations.

Given below is a sample launch-params, that is used in StratosLive by the load balancer of the Application Server service.

We will look more into these launch-params now.

The service zip and the common modifications or patches are stored in an S3 bucket. The locations are given by a few properties in the launch-params shown above.

Apart from these, PRODUCT_NAME, SERVER_NAME, HTTP_PORT, and HTTPS_PORT for the application are also given.

3) Configurations for the application groups

These are defined under

These too should be configured as we configured the properties for the load balancers above.

Some of these properties - such as the payload, host, and domain - will be specific to a particular service group, and should be defined separately for each of the services, under

Properties applicable to all the instances

payload, availabilityZone, securityGroups, and instanceType are a few properties that are not specific to the application instances. We have already discussed about these properties when setting the load balancer properties above.

Properties specific to the application instances

These properties are specific to the application clusters, and are not applicable to the load balacer instances. We will discuss about these properties now.

'maxAppInstances' defines the upper limit of the application instances. The respective service can scale up till it reaches the number of instances defined here.

The property 'queueLengthPerNode' provides the maximum length of the message queue per node.

The property 'roundsToAverage' indicates the number of attempts to be made before the scaling the system up or down. When it comes to scaling down, the algorithm makes sure that it doesn't terminate an instance that is just spawned. This is because the spawned instances are billed for an hour. Hence, even if we don't have much load, it makes sense to wait for a considerable amount (say 58 minutes) of time before terminating the instances.

This defines how many instances should be scaled up for each time. By default, this is set to '1', such that a single instance is spawned whenever the system scales. However, this too can be changed such that multiple instances will be spawned each time the system scales up. However it may not be cost-effective to set this to a higher value.

messageExpiryTime defines how long the message can stay without getting expired.

Here we also define the properties such as payload and availabilityZone, if they differ from the default values provided under

Hence these properties should be defined under

for each of the services.

'hosts' defines the hosts of the service that to be load balanced. These will be used as the access point or url to access the respective service.

Multiple hosts can be defined under 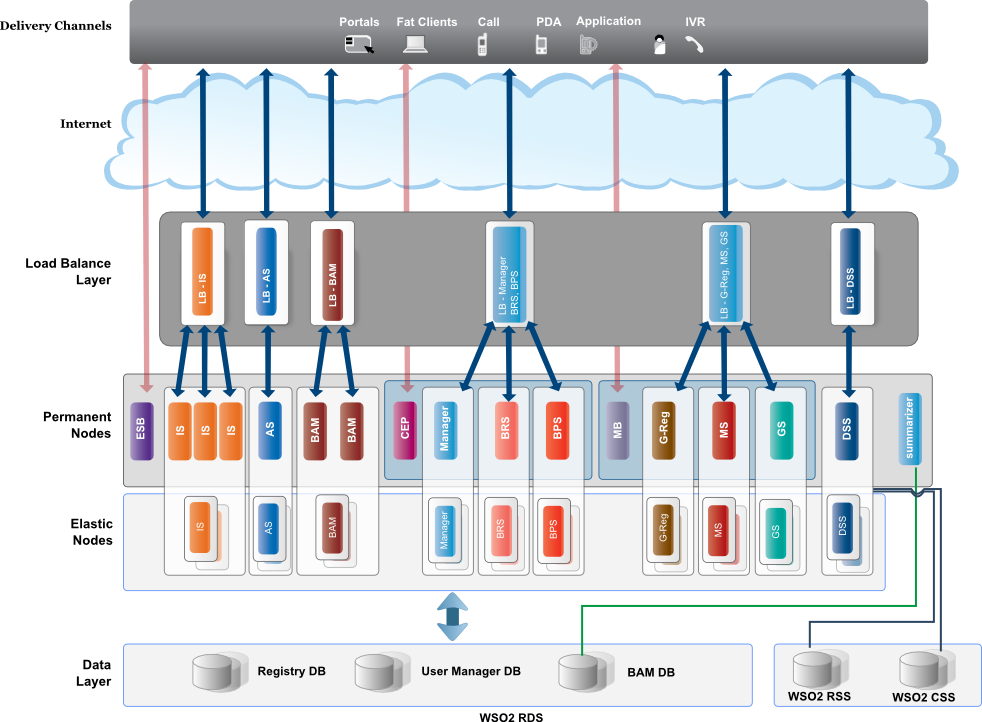 Multiple service groups are proxied by WSO2 Load Balancers. Some of the services have more than one instances to start with, to withstand the higher load. The system automatically scales according to the load that goes high and low. WSO2 Load Balancer is configured such that the permanent or the initial nodes are not terminated when the load goes high. The nodes that are spawned by the load balancer to handle the higher load will be terminated, when the load goes low. Hence, it becomes possible to have different services to run on a single instance, for the instances that are 'permanent', while the spawned instances will have a single carbon server instance.

Auto Scaling with Amazon EC2 - I

WSO2 Load Balancer - how it works

Moving from a 'Platform' to the 'Platform-as-a-Service' ~ What is it all about?

Getting Started with WSO2 Cloud Virtual Machines for Amazon EC2