WSO2 has been performing in the cloud for quite sometime now. StratosLive was its first public cloud offering which was operational from 2010 Q4 to 2014 Q2. We had to shutdown StratosLive after we donated Stratos code to Apache (due to trademarks etc.). Now Apache Stratos is a top level project (graduated) after spending nearly one year in incubating.

We at WSO2 were feeling the requirement of a cloud that is more user friendly and more use case oriented. To be honest, although StratosLive had all WSO2 middleware products hosted in the cloud, a user needed to put some effort to get a use case completed using it. It was decided to build a new application cloud (app cloud) and an API cloud using the WSO2 middleware stack. App Cloud was going to be powered by WSO2 App Factory and API Cloud by WSO2 API Manager. The complete solution was decided to be named as "WSO2 Cloud".

We hosted a preview version of WSO2 Cloud as WSO2 Cloud Preview in October 2013. Since then we were working on identifying bugs, usability and stability issues, etc. and fixing them. This June, we announced WSO2 Cloud beta. It was announced in WSO2 Con - Europe 2014 in Barcelona.

You can go to WSO2 Cloud via the above link. If you have an account in wso2.com (aka WSO2 Oxygen Tank) you do not need to register, you can sign in with that account. If you don't, you can register by simply providing your email address. 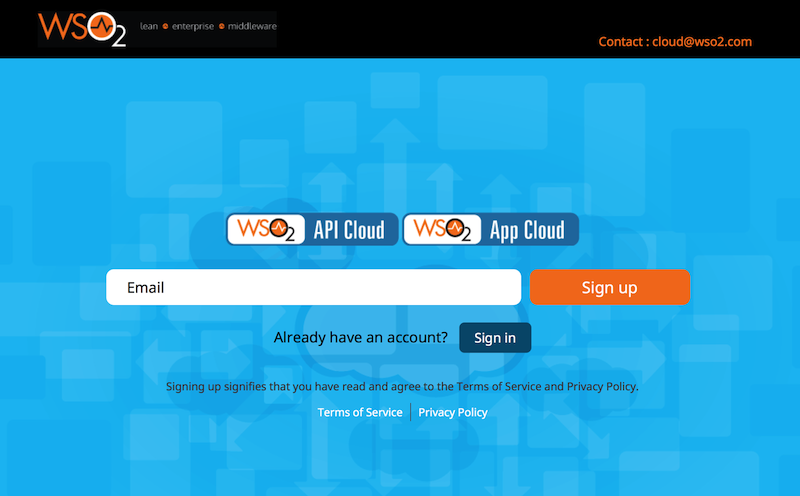 Once you are signed in, you will be presented with the two clouds, App Cloud and API Cloud.

The above mentioned points are some of the major features of WSO2 App Cloud and API Cloud. I'll be writing more posts targeting specific features and also hope to bring you some screencasts.

Experience WSO2 Cloud and let us know your feedback.