Bayesian Learning uses Bayes theorem to statistically update the probability of a hypothesis as more evidence is available. This article explains how Bayesian learning can be used in machine learning. Bayesian-based approaches are believed to play a significant role in data science due to the following unique capabilities:

Moreover, the Bayesian methods can be used to produce probabilistic predictions over several hypotheses rather than assigning each instance to a single hypothesis. If we consider a simple scenario where we have to predict which team is going to win the cricket world cup this year using the past performance of each team, then classical machine learning techniques can be used to predict only the winning team, whereas Bayesian learning can be used to determine the probability of each team winning the world cup. Yet Bayesian learning has been neglected in the area of machine learning due to the following reasons:

Since Bayesian learning has shown its potential in predicting complex tasks with a high accuracy, we wanted to explore the capabilities of Bayesian learning for general regression and classification tasks. Therefore, we evaluated classification and regression models that use Bayesian inference with several publicly available classification datasets. Furthermore, we provide a comparative analysis of the performance of Bayesian models compared to other baseline machine learning techniques with respect to the accuracy and the time taken for training the models.

We used PyMC3 probabilistic programming framework for our implementations. PyMC3 is a probabilistic programming framework that is written in Python, which allows specification of various Bayesian statistical models in code. The classification model was implemented as a Multinomial Logistic Regression model, whereas the regression was carried out using a linear regression model that was implemented using the Generalized Linear Model (GLM) module of PyMC3.

In linear regression we try to fit the relationship between the dependent variable $Y$ and the predictor variable $X$ into a straight line, usually by minimizing the least squared error (LSE). Consider a dataset with $N$ number of samples and $D$ number of features. We can represent the linear relationship between $i^{th}$ predictor variables and dependent variable using the following equation:

where $w_j$ and $\tau$ are the coefficients to be determined. The error term is denoted by $\epsilon$.

Then we defined $y_i$ as a normally distributed random variable with mean $\mu_i$ and standard deviation $\sigma$. $\sigma$ is another random variable that should be determined using the Bayesian inference.

Since we have finished defining Bayesian linear regression model, now we can use observations $Y$ to inference the posterior distribution of model parameters $w_j$, $\tau$ and $\sigma$. Here $\mu_j$, $\sigma_j$ and $\beta$ are the hyper-parameters to the model.

Similar to the linear regression model, $X$ and $Y$ denote the predictor variable and the dependent variable, respectively. However, we have $K$ number of dependent variables where $K$ is the number of classes. We could have also define $K-1$ dependent variables and find the probability of class $K$ by subtracting the sum of probabilities of $K-1$ classes from the total probability, which is equal to one. Each dependent variable $Y=y_i$ represents the hypothesis that an instance belongs to the $i^{th}$ class. Therefore, $P(Y=y_i|X)$ is the probability that an instance belongs to the $i^{th}$ class given the data X. $\beta$ is the coefficient matrix with dimensions $D\times K$, whereas $\alpha$ is a vector with size $K$. Therefore, here $X.\beta$ is the dot product between the $X$ and the coefficient matrix $\beta$.

Even for Softmax regression, we can consider parameters $\alpha$ and $\beta$ are the random variables for the Bayesian model. We consider the probability distribution of each parameter is normally distributed.

However, here $\alpha$ and $\beta$ are not just random variables, they are a random matrix and a random vector, respectively.

Let’s define the deterministic variable $p$ is defined as follows:

Now we can represent the observations $Y$ using a categorical distribution, which takes deterministic variable $p$ as its parameter.

For both regression and classification models, we used three techniques to perform the Bayesian inference.

For the logistic regression we used Metropolis sampler. However, the linear regression models are trained using No-U-Turn sampler (NUTS). If NUTS failed to converge due to some error, then the Metropolis sampler is used. We have extracted 5000 samples using the samplers for each dataset.

Moreover, we trained several baseline models to compare the performance of the Bayesian regression models.

We used several classification and regression datasets for our experiment. A brief summary of the datasets is shown in the following tables.

We have used various datasets with different complexities (in terms of the number of samples, features, and classes) for our experiment. Therefore, by using these evaluation results we can come up with a general conclusion about the performance of Bayesian machine learning irrespective of the specific characteristics of the datasets.

We collected various statistics such as the accuracy (mean squared error for regression models) of the models and the time required for learning each model. For simplicity let’s discuss each statistics for classification and regression separately.

Table 3: Classification accuracy of models for each dataset 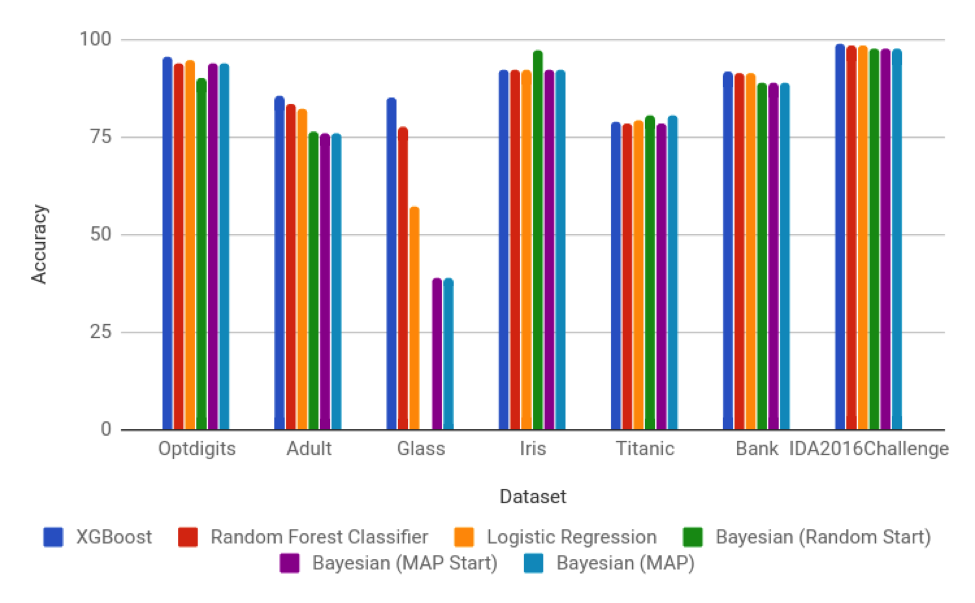 If we look at chart 1, we can observe that except for very few scenarios Bayesian classifiers perform (in terms of accuracy) as well as the benchmark classification models. Only for the Glass dataset we can see that the Metropolis sampler and MAP have failed to converge to a more optimal solution from where it started. Moreover, for the simple classification datasets such as Iris and Titanic, Bayesian classifiers show significantly higher accuracies. 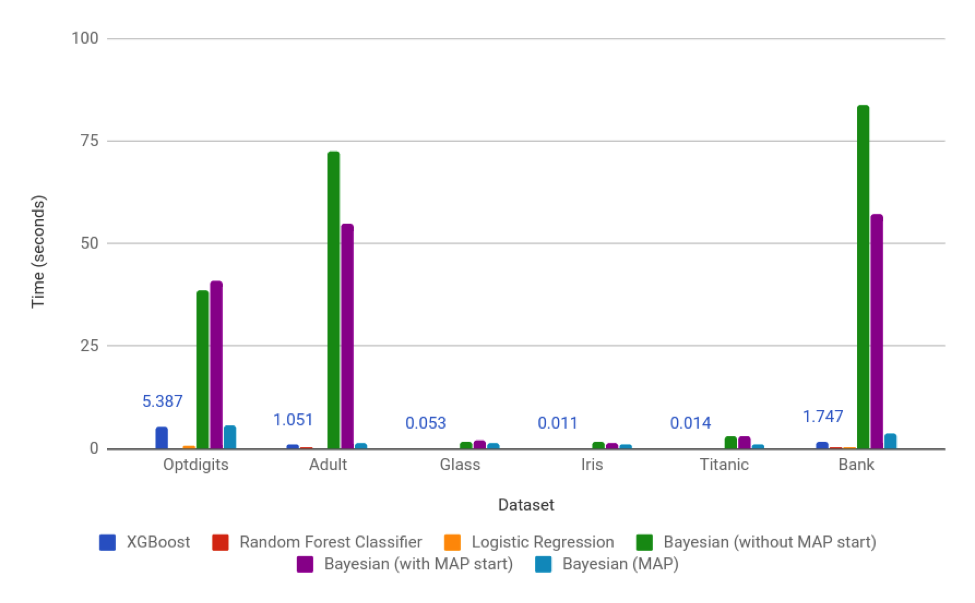 Another important observation is that the MAP estimation shows similar results to Bayesian models that use MCMC sampling algorithms. This raises a question of whether the only advantage of using Bayesian samplers instead of single point estimation techniques such as MAP is to determine the confidence interval of the posterior predictions. However, in chart 2 we can observe that sampling techniques take longer time than all other techniques used. For some cases, it is more than 1000 times larger. I had to remove the time taken for training the IDA2016Challenge intentionally to ensure the visibility of lower values of the graphs.

Table 4: Mean squared error of models for each dataset

Table 4 shows the Mean Squared Error (MSE) of the models that we evaluated for each dataset. However, for KC House, Financial Distress and CCPP datasets the NUTS of Bayesian (Random Start) failed during the sampling. We believed that this failure is due to some undefined calculation (such as division by zero) during the gradient computation of NUTS sampler. For such cases, Metropolis sampler is used as the Bayesian inference technique. 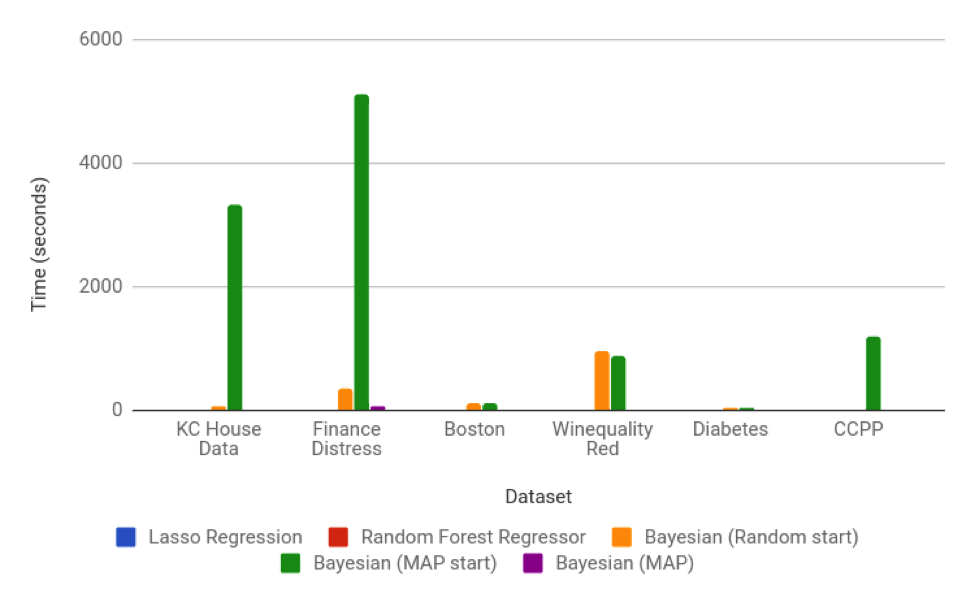 Here I have listed down other observations including those discussed above:

We can derive the following conclusions from the above observations.

We need to explore more to understand the effect of the factors (such as the number of features, number of samples and the complexity of the task) on the execution time of MCMC sampling. Even the specific Bayesian model structures that are used for the experiment can be the reason for the certain observations such as the long time taken to converge when sampling is used. Therefore, understanding the nature of Bayesian Learning require extensive analysis, considering a wide-range of such aspects.