Part I of this article series provides an introduction to Bayesian learning. With that understanding, we will continue the journey to represent machine learning models as probabilistic models. Once we have represented our classical machine learning model as probabilistic models with random variables, we can use Bayesian learning to infer the unknown model parameters. Such a process of learning unknown parameters of a model is known as Bayesian inference.

This shows that Bayesian learning is the solution for cases where probabilistic modeling is more convenient and traditional machine learning techniques fail to provide state-of-the-art solutions. Bayesian-based approaches play a significant role in data science owing to the following unique capabilities:

Let’s see why the above capabilities are important in machine learning, especially in real-world applications.

Bayesian learning is now used in a wide range of machine learning models such as,

Here $\tau$ is the intercept and $w$ is the coefficient of the predictor variable. The term $\epsilon_i$ represents the individual error when modeling real-world data that does not fit perfectly to a straight line. Now we have to determine the values for these unknown parameters $\tau$ and $w$ minimizing the total error. One way of doing so is by minimizing the least squared error or using the maximum likelihood, which is categorized as frequentist methods. However, in Bayesian learning, we are not satisfied with a single point estimation, instead, we want to know the probability distributions of the unknown model parameters.

According to the frequentist method, we can determine a single value per each parameter ($\tau$ and $w$) for the linear regression model and find the best-fitted regression line by minimizing the error $\sum_{i=1}^{N} \epsilon_i$ for $N$ data points. We can use least squares and maximum likelihood to find such a regression line when using frequentist inference. I will not discuss in detail how such frequentist inference is performed. Instead, we will discuss the properties of the outcome of such classical machine learning techniques.

The following figure shows such a regression model for an artificially generated dataset. Note that here we have to determine a single coefficient $w$ and the intercept $\tau$; therefore, we can model the data and the dependent variable in the 2D space. 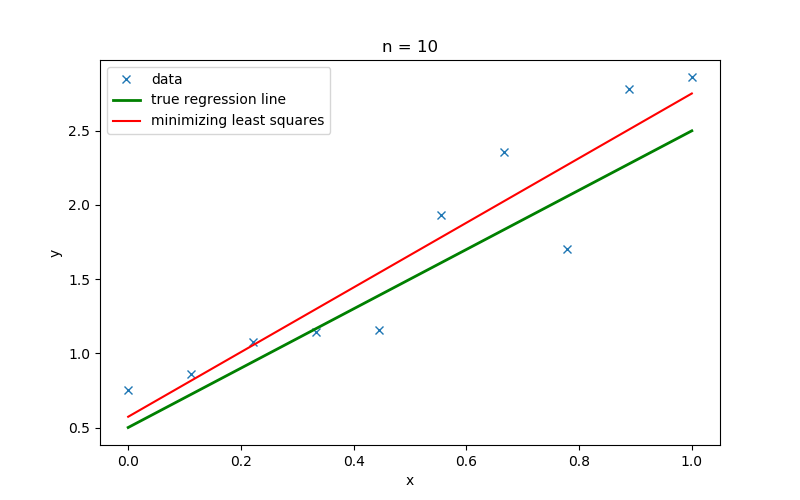 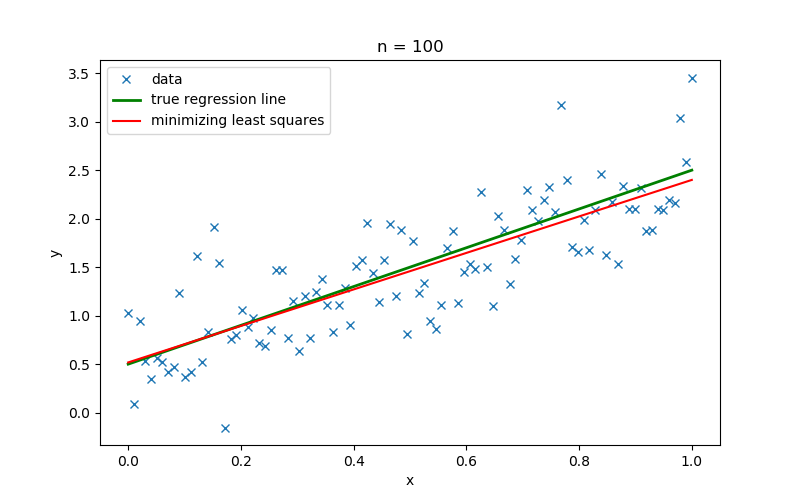 Figure 1: Linear regression lines for generated datasets with number of samples ($n$) $10$ and $100$

Figure 1 shows the linear regression lines that were inferred using minimizing least squares (a frequentist method) for a dataset with the number of samples ($n$) $10$ and $100$, respectively. When generating the dataset, the slope $w$ and the intercept $\tau$ was set to $2$ and $0.5$, respectively.

Why Can't We Use Confidence Intervals to Estimate Uncertainty?

However, for the impatient, first, I’ll present the implementation of such a Bayesian linear regression model using the Python language and the PyMC3 probabilistic programming framework.

In PyMC3, we have to include the specification of model architecture within a with statement. Inside the with statement, we define the random variables of our model. Here we have defined three prior distributions corresponding to each unknown variable in the linear regression model:

The choice of distribution and their parameters of the priors are simply based on our beliefs and past experience. Assume if we have seen that for similar cases, the probability distribution of the intercept follows a normal distribution with parameters $\mu=2$ and $\sigma^2 = 1$. Then, we can reduce the effort taken to determine the posterior of intercept during training by incorporating that information when defining the prior of the intercept. The ability to incorporate our beliefs into the model is a major advantage of using Bayesian learning for implementing machine learning models. However, a bad choice of prior can lead to poor models or to situations even worse than classical models without priors. In the above implementation, we have selected priors simply by considering the nature of each parameter (i.e., the error term/sigma is given a Half Cauchy distribution since it is considered the variance of the likelihood). Since this is a simple model with three unknowns, we expect any inconsistencies in our priors to be eliminated during the training.

Finally, we use the PyMC3 sample method to perform Bayesian inference through sampling the posterior distributions of three unknown parameters. By default, PyMC3 uses NUTS to decide the sampling steps. Let’s discuss different Bayesian inferences techniques and some of the MCMC samplers in another blog, the focus in this article will be to understand the underlying concepts that are used to define Bayesian models.

The full code for the both Bayesian linear and logistic regression using Python and PyMC3 can be found using this link, including the script for the plots.

Even though we discussed the implementation of the Bayesian regression model, I skipped the fun parts where we try to understand the underlying concepts of the above model. You should now have many questions, such as how did I decide the values for the parameters of the likelihood and how does the above model architecture adhere to the Bayes’ rule we learnt in the first article, etc? Let’s try to resolve these questions while trying to understand the above model with probabilistic concepts.

Here, we have defined that each observation $y_i$ follows a normal distribution with a mean $\mu_i$ and a variance $\sigma^2$. Now, let’s try to understand the meaning of these $\mu_i$ and $\sigma^2$ in terms of the linear regression model. We know that mean of a normal distribution is the most probable value for that random variable. However, according to the linear regression equation, we believe that $w.x_i + \tau$ is the most probable value for $y_i$. Therefore, we can define $\mu_i$ as,

Even though $\mu_i$ is the most probable value for $y_i$, $y_i$ can also include some error or noise. Accordingly, we model such errors $\epsilon_i$ in the observations by adjusting the variance term $\sigma^2$ to compensate for the deviations of $y_i$ from $\mu_i$. Let’s denote the error term $\epsilon$ using a normal distribution with a zero mean and $\sigma^2$ variance.

Now you should be able to understand how each term in the traditional linear regression model (equation 1) is represented using the normal distribution as shown in equation 5. Even if we think for a moment, the mean and the variance of a normal distribution represent the most significant value and the deviation of the values from that most significant value, respectively. Moreover, the values nearby the mean will have a higher chance of appearing, whereas the probability of observing the value reduces when moving away from the mean. Therefore, our assumption to choose a normal distribution to represent the random variable $y_i$ is not an arbitrary decision, it is chosen such that we can represent the relationship between the dependent variable $y_i$ and independent variables $x_i$ with the effect of the error term $\epsilon_i$ using the properties of the normal distribution.

Once we define the linear regression model using the notation shown in equation 5, we get three unknowns: $w$, $\tau$ and $\sigma^2$ . It should be noted that even though the $mu_i$ is considered as a deterministic variable, it is derived using the unknowns $w$, $\tau$ (equation 3). In Bayesian learning, these unknowns are also called as hidden or latent variables, because we have not seen values of those variables yet. Therefore, we have to determine the parameters $w$, $\tau$ and $\sigma^2$ using Bayesian inference given the $X$ and $Y$. We can represent such relationships between random variables using the conditional probability distribution $P(w, \tau, \sigma^2 | Y, X) $.

As shown in equation 9, we have chosen the shape of the probability distributions for $w$ and $\tau$ to be normally distributed and we have given $\sigma^2$ the Half-Cauchy distribution. One could say this is our prior belief regarding those parameters. Actually, we have no way of deciding the perfect distribution to represent our prior belief for this case, yet we assume that those random variables can be modeled using the normal distribution. The $\mu_1$, $\sigma^2_1$, $\mu_2$, $\sigma^2_2$ and $\beta$ are the hyperparameters to the model, which are also considered as a part of prior belief. Even though it is difficult to determine the shape of the unknown model parameters, we can still guess reasonable values for some of the above hyperparameters. For example, in the above single coefficient dataset (Figure 1), if the $y_i$ values are $10$ times larger than the $x_i$ values, then selecting $\mu_1 = 1$ does not make any sense. Since $y_i \approx 10 \times x_i$, the most probable value for $w$ should be closer to $10$ and, therefore, we could choose the mean $\mu_1 = 10$ . However, we expect the influence of these hyperparameters to the model to be insignificant when provided with sufficient evidence to update the prior distributions (recall the coin-flip example).

In Figure 2, we can observe that instead of exact point estimations, now we have probability distributions for each model parameter. Even though we started with normal priors for hidden parameters ($w$ and $\tau$), the posterior distributions have a different shape. However, we used a Half-Cauchy prior for the $\sigma^2$, yet the posterior distribution of that is closer to the normal distribution. Therefore, even with the poor choice of priors, we can achieve accurate posteriors if sufficient evidence/data is available (notice the change of $\sigma^2$ from $n=10$ to $n=100$). However, it should be noted that poor priors should be avoided since they could affect the accuracy of the models significantly in the absence of sufficient data. Furthermore, if we have fairly accurate priors, we can achieve better results even with fewer data, whereas frequentist methods lead to overfitting of models with fewer data. Moreover, with more and more data, the slope ($w$) and the intercept ($\tau$) are getting closer to the real values. The confidence of the estimated parameters is increased (compare the width of curves between $n=10$ to $n=100$) when more information is provided to learn the parameters.

The following diagram shows multiple regression lines that were plotted using the samples extracted from such posterior distribution for the artificially generated data set. 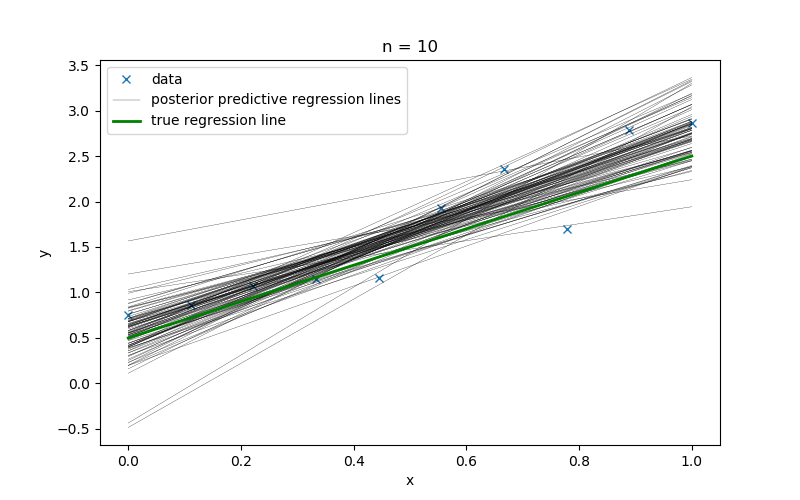 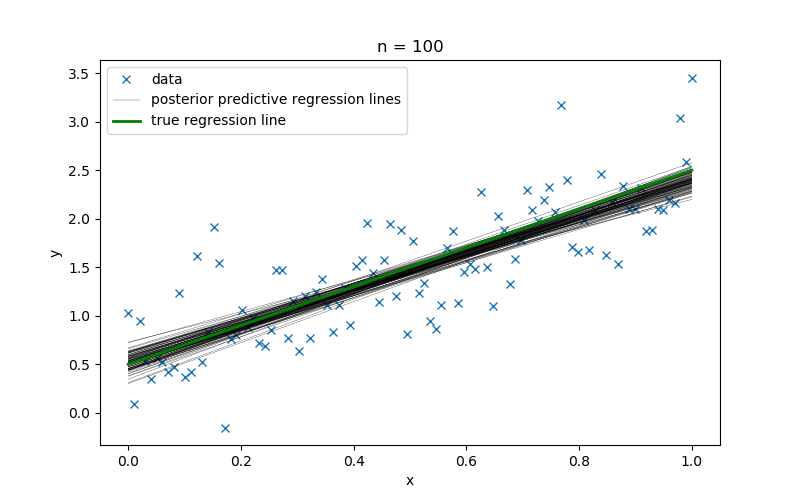 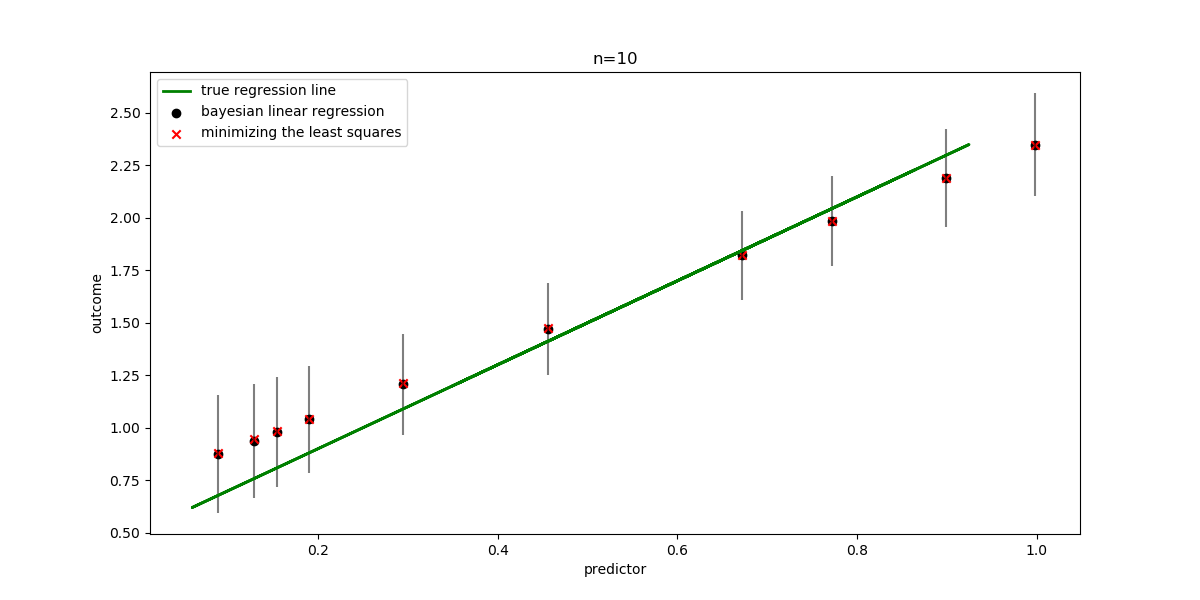 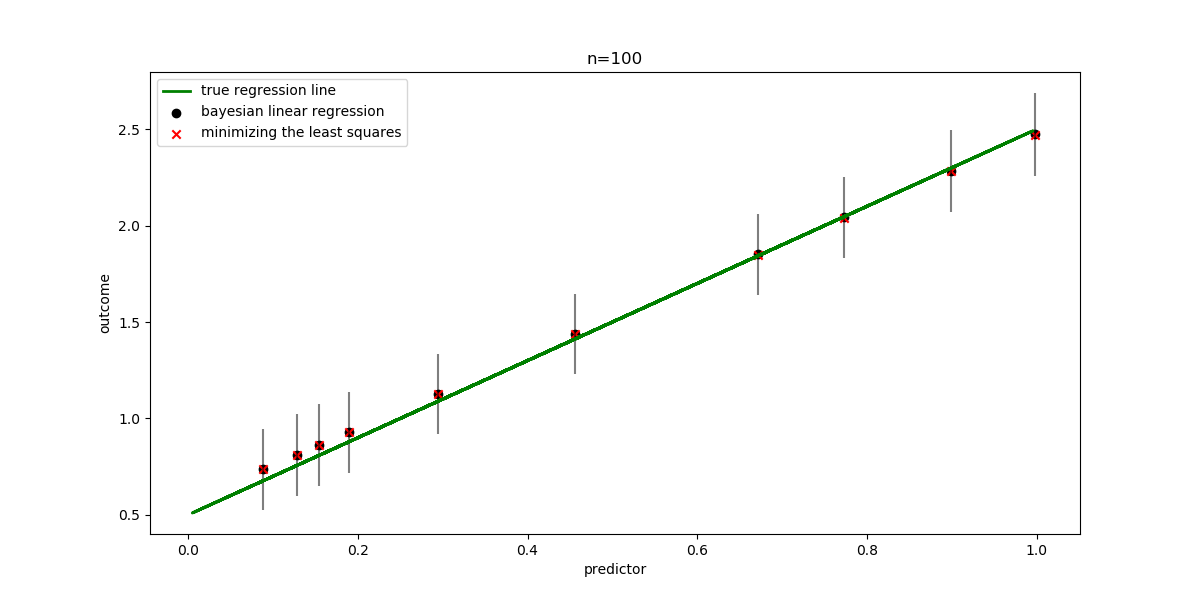 Typically, classical machine learning models are less useful in the absence of sufficient data to train those models. However, a Bayesian model can still be useful with less data owing to its capability to attach an uncertainty value with each prediction. Moreover, if we have beliefs or past experience regarding the unknown parameters, then, we can use them as priors to the model in order to compensate for the missing data. Furthermore, we can incrementally update the models when more data is available rather than creating a new model to include each piece of information.

A Small Note on Bayesian Inference

Now we know how to represent machine learning models as probabilistic models and interpret them using the Bayes’ theorem. However, we still did not discuss how to perform Bayesian inference in order to determine the posterior distributions of the unknown parameters given the priors and the observations (data).

We discussed how to interpret the simple linear regression in the context of Bayesian learning in order to determine the probability distributions of the unknown parameters rather than exact point estimations for those parameters. The Bayesian regression model that we discussed above can be extended for other types of models (such as logistic regression and Gaussian mixtures etc) by defining the priors for random variables and the likelihood as probability distributions and then mapping those random variables to exhibit the properties of the desired model. In fact, you can model any type of relationship between independent variables and dependent variables, then let Bayesian inferences figure out the inference of those parameters. Moreover, the uncertainty attached with each prediction enhance the decision making to make more safe and accurate decisions, while the incremental updates to the priors can improve the confidence and the accuracy of the predictions when more information is available.