WSO2 API Manager provides a complete API management solution that allows APIs to be published, managed, and secured via the API Manager. It also provides the ability to manage API subscriptions and monitor/monetize APIs. WSO2 API Manager itself provides a high level of access restrictions on the APIs that are exposed via API Manager. However, a requirement may arise where the API Manager would require a very fine-grained access control mechanism to secure its APIs. In such a scenario, WSO2 API Manager can delegate policy decision making to a XACML entitlement server, which would evaluate each request based on pre-defined XACML policies to allow or deny service invocations.

Organizations would have their own access control requirements when exposing APIs to its users. WSO2 API Manager provides a comprehensive authentication and authorization mechanism by which APIs can be secured when exposing them to a developer community. However, the granuility of the authorization mechanism provided by WSO2 API Manager may not be sufficient to support a very fine0grained access control requirement. In order to support such a scenario, XACML-based entitlement policy evaluation capabilities can be installed in WSO2 API Manager. The API Manager’s API Gateway would act as a policy enforcement point (PEP) and the XACML entitlement server within WSO2 API Manager would act as the policy decision point (PDP). The API invocations would be evaluated by the entitlement server within the WSO2 API Manager and the status would be communicated to the API Gateway. This has been graphically illustrated by Figure 1.1 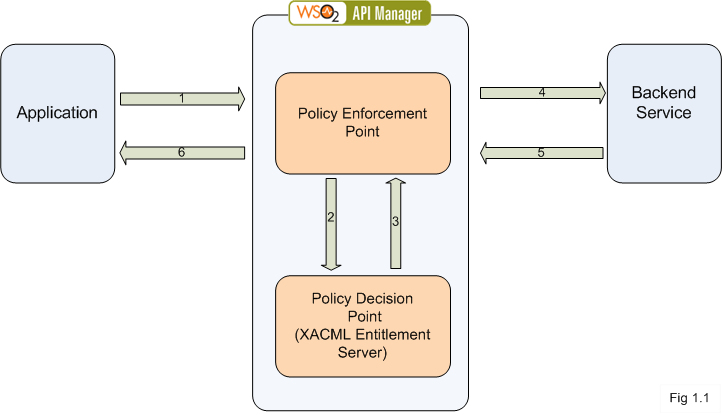 Delegating authorization to a PDP allows the implementation of more complex access control policies that would provide the organization with greater flexibility in exposing the APIs. It also creates an opportunity for the organizations to expose their APIs to users with different levels of access privileges, who will be able to access only the required capabilities of each API based on their access privileges. For example, an organization would have an API that should be fully available to one user, while only some capabilities of the same API should be made available to another user. Such a requirement can be fulfilled by extending the security model of the WSO2 API Manager to include a separate XACML entitlement server as a PDP to evaluate the service invocations based on a set of pre-defined entitlement policies.

The scenario involves a backend server that returns the risk rating for different risk types. An application would make an API invocation with the risk type, and in turn, the backend service would return the risk rating for each type of risk. The risk assessment API is exposed via WSO2 API Manager. The API would be available for subscription from the API store of the API Manager. Each developer can subscribe to this API from the API Store. All API invocations to the Risk API would be routed via the API Gateway of the API Manager. The API Gateway would delegate the security authentication to the Entitlement Server of the API Manager. The Entitlement Server would authenticate the request against XACML policies defined within the PDP. The XACML entitlement policies defined in the Entitlement Server would contain policies pertaining to different users who are allowed to access the API. 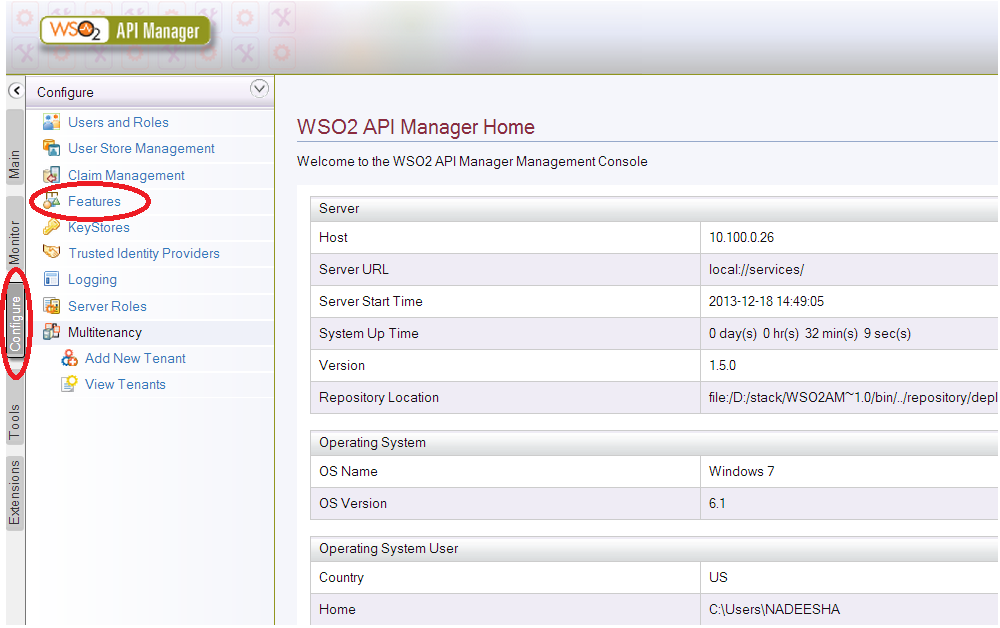 Inside the features page, select the repository management tab and click on the ‘add repository’ icon

Add the following repository details in the ‘Add Repository’ page.

Once the repository is added, click on the ‘Available Features’ tab. Select the newly added repository and un-tick the ‘Group features by category option’ and click on ‘Find features’ button.

5. Create an API through the API Publisher

6. Add the Callback handler to the newly created API.

Once the API is created, it is required to add the callback handler to the API. This has to be done by changing to the API definition in the API Manager. In order to do, this we need to access the admin console of the API Manager.

Once inside the admin console, click on the ‘source view’ icon available on the left hand navigation bar as shown in the image below. 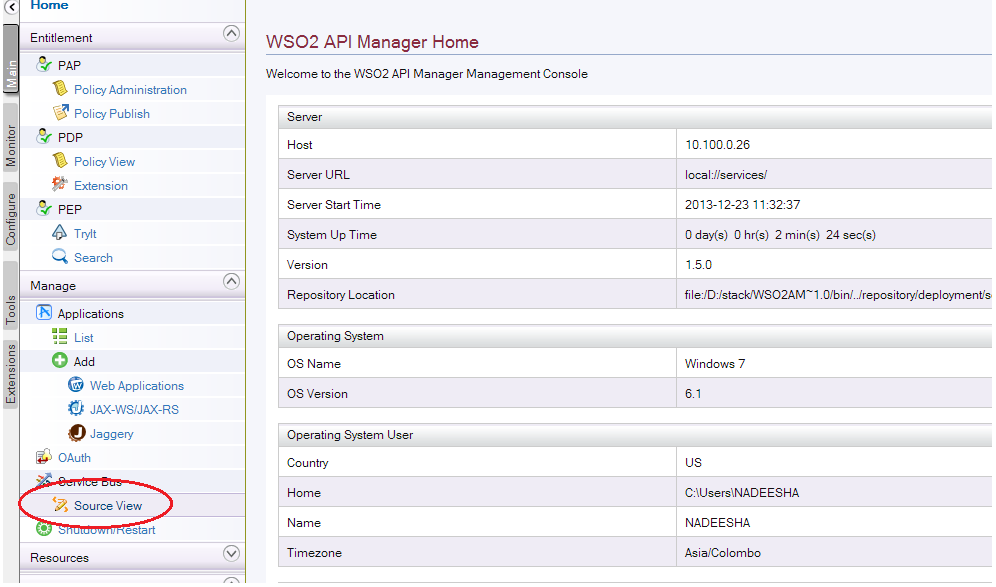 Source view will give access to the synapse configuration of all APIs that are available in the API Manager. Search for the newly created API from the configuration and add the following configuration related to the callback handler.

Once the callback handler is added, the configuration should be as shown below.

7. Add the entitlement policies to the Entitlement Server

XACML policies need to be added to WSO2 API Manager to evaluate API invocations based on those policies. For this scenario we would create an
entitlement policy that would allow subscriber1 to access only the fire related risk rating and deny any other type of risk rating.

This policy would allow the user ‘subscriber1’ to invoke a GET method using query string ‘fire’.

After creating the XACML Policy it needs to be published to the PDP. This can be done by clicking the ‘Publish to my PDP’ icon available in the Policy
Administration page as shown below.

Once the policy is enabled in the PDP, it is possible to test the policy using the in-built ‘try it’ tool.