Getting Started with WSO2 Carbon

The Carbon platform is a collection of totally independent components which can be added or removed from a solution dynamically. This behavior is achieved through the use of Open Services Gateway Initiative(OSGi)[8] framework. In OSGi, independent components are called bundles. Therefore, Carbon can also be referred to as a collection of highly dynamic bundles. A product like WSAS is really constructed adding product specific bundles to the base Carbon platform. Even a user could write his own bundle to add in functionality and have it included in a solution without affecting other components.
This article describes the basics of OSGi needed to write your own Carbon components. In addition, we will also show you how to plug that new component back into the system and how to maintain it.

As introduced above, WSO2 Carbon is a collection of totally independent components. Those components are called Carbon components. A Carbon component can be added or removed from the Carbon framework any time the system is up and running. These components can use the functionalities and resources exported from other components, and export their resources to the framework.
Carbon components inherit this dynamic behavior through the use of OSGi technology that lies beneath the Carbon framework. Basically a Carbon component is an OSGi bundle. A bundle is a standard jar file which includes OSGi specific meta data in a MANIFEST.MF file which should be located in the META-INF folder of the jar file. Just as normal jar files, it can contains .class files, images, html files etc. Additionally, it can embed other jar files at the root level. Additionally, an OSGi bundle can contain OSGi-INF and OSGi-OPT folders with meta data. Those are optional and rarely used.
Therefore, in simple terms, a Carbon component can be constructed by making a normal jar file containing your logic in .java files, and adding OSGi specific meta data in to the MANIFEST.MF file.

Manifest Headers to be Included in MANIFEST.MF

When constructing an OSGi bundle using Maven2, the first step is to write the normal pom.xml with all the needed dependencies and Maven attributes. Refer to Maven2 help guide[10] if you are not familiar with Maven2. After getting the project to build correctly, you can use the Maven bundle plugin under plugins section of the pom.xml to generate the OSGi meta data. You can provide all above explained meta data easily as in the example shown in the figure below. After including those meta data into the pom.xml, all you have to do is to build the project again to build the bundle jar file which includes the generated MANIFEST.MF file.

The Star ('*') character can be used to indicate all packages under a particular parent package. Bundle plugin will write all matching packages into the MANIFEST.MF file.
Exported packages are removed from the imported list using '!' character to avoid cyclic dependencies as a best practice.
Even though you haven't specified any import packages, bundle plugin will automatically write all external packages used within this bundle, under the Import-Package section of the MANIFEST.MF file.

First of all you have to have a WSO2 Carbon binary distribution. The easiest way to have Carbon is to download one of the WSO2 products which runs on Carbon. So lets download WSO2 WSAS[4]. Extract the zip file and copy your bundle into WSAS_HOME/webapps/ROOT/WEB-INF/plugins directory. Now move into bin directory and run the server with -DosgiConsole parameter (refer to README files in the distribution for more details).
Example : sh wso2server.sh -DosgiConsole
This command will start the server and it will provide you with an OSGi console to monitor bundles in the system. Once the server starts, use 'ss' command to list all bundles. It will list all bundles with their statuses as shown in the image below. Please read Chapter 4 of the OSGi specification for details on bundle life cycle. 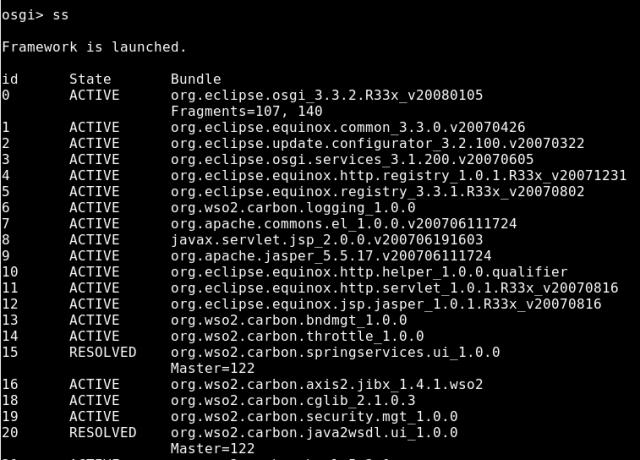 Now you can check whether your bundle is ACTIVE (or RESOLVED if it is a fragment) by tracking it using the symbolic name you've provided.

WSO2 Carbon framework is highly dynamic and flexible. This is achieved using OSGi technology. As a user, it is really important to know how to extend a Carbon based product like WSAS in order to add new features. It can be done simply by writing a new Carbon component which is also called an OSGi bundle. This article looked at the basics on writing a bundle and plugging it back to WSO2 Carbon.